A little while back, the Tree Bicycle Co. crew loaded up for a trip out to Pennsylvania to spend some time at Woodward East! Check out this BMX video featuring Clint Reynolds, Timmy Theus, Nina Buitrago, Sam Schulte and the rest of the crew having some fun! Looks like it was a proper trip to us!

“Join Tree and it’s crew of badasses at one of the greatest places to ever ride a bmx bike, Camp Woodward East!

END_OF_DOCUMENT_TOKEN_TO_BE_REPLACED

Here’s this weeks Throwback Thursday from the Crazy Freakin’ Bikers series that Mat Hoffman has been uploading! This week we head to Pennsylvania for the Woodward stop of the contest series, get a look at the Roots Jam, meet a few of the ladies who were riding back in 2001 (and still riding today) and sit down for an interview with Taj Mihelich! So good!

Old school street purists are sure to hate it, the younger guys are sure to embrace it… Woodward will soon make the long kicked around idea of a street foam pit a reality.

Ben Kavanagh At Woodward from DK Bicycle Company on Vimeo.

DK’s pint sized shredder Ben Kavanagh was able to enjoy some time at Woodward East and Justen Soule was on hand to catch it all. out of the whole edit it might sound odd that this is my highlight, but check out the way he comes out of the double peg at 0:58. Style! 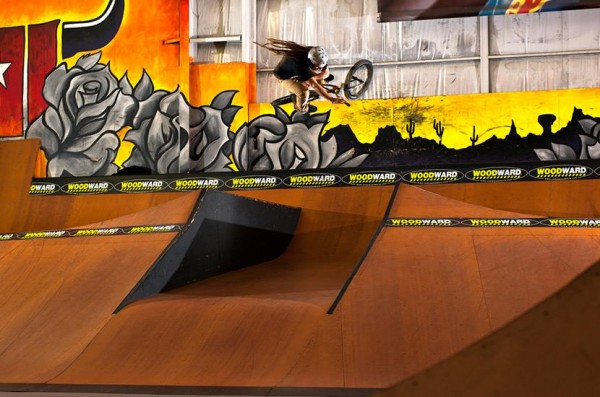 Recently Cult’s Russ Barone, Grant Germain, Steven Ocasio, and Tafari Smith got some time in at Woodward East. There is a video in the works, but for now enjoy a photo gallery shot by Nick Jones.

Zane Bradley is one guy who we’ve been blown away every time a video of him pops up or we see him riding a contest. This new video Woodward dropped is hands down some of the best riding we have seen from him and I can only imagine he isn’t slowing down any time soon! Check it!

“If you have been to camp in any of the past couple years we are guessing that you have crossed paths with Zane. Zane has continued to push the envelope each summer throwing down bigger gaps, more technical tricks all over camp. Check it out.

Some of the Tables and Fables crew loaded up and took a three day road trip between Cranx in Buffalo, New York and Woodward down in Pennsylvania! This video gives us a look at some of the trip along with a bunch of the riding that they got in during both stops. Looks like it was a good trip to me!