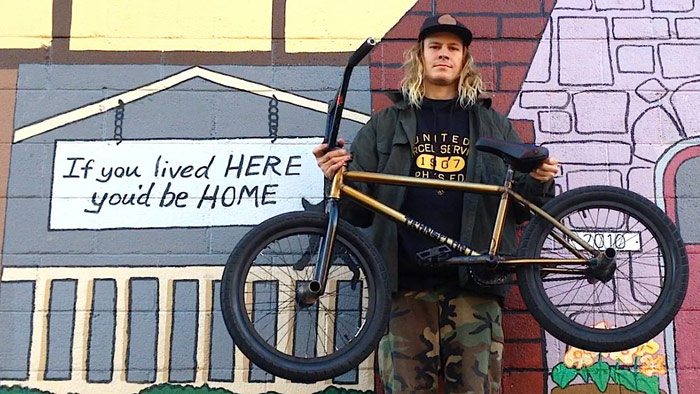 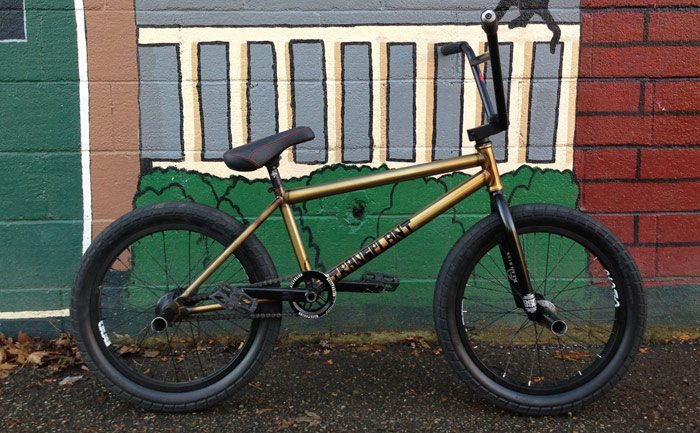 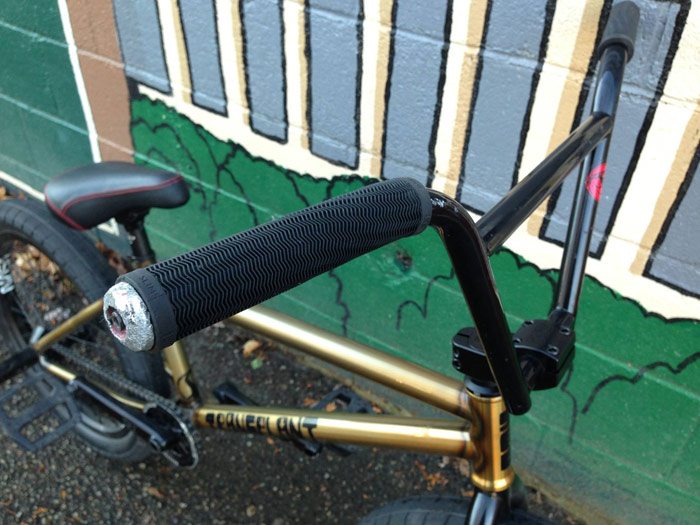 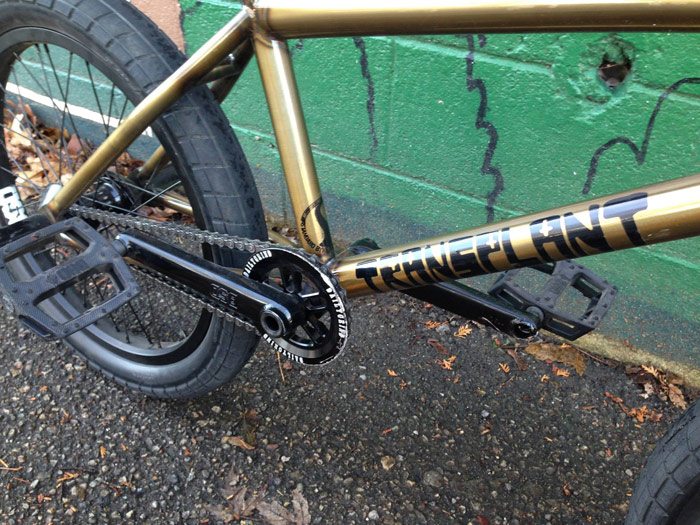 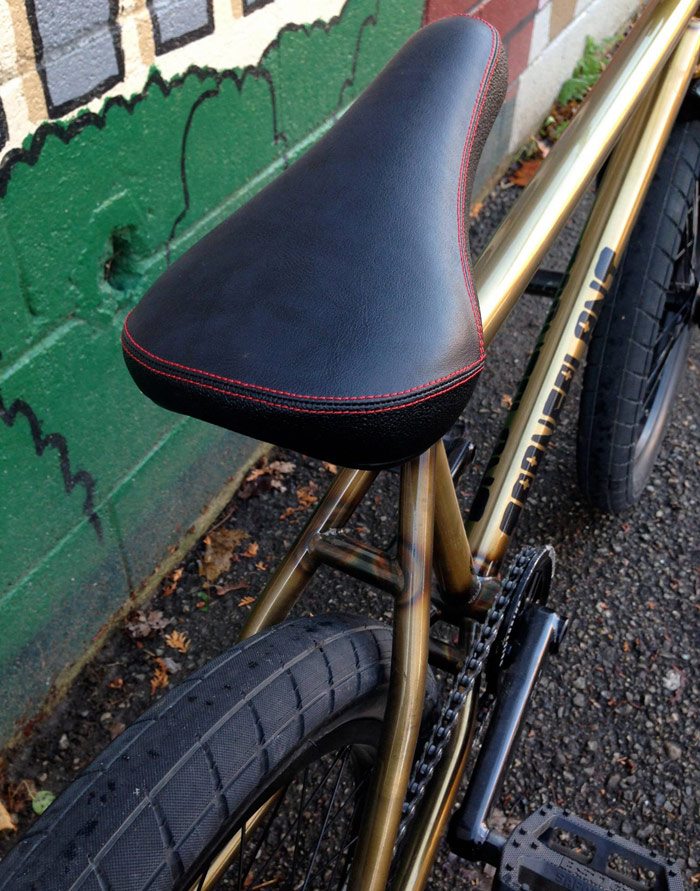 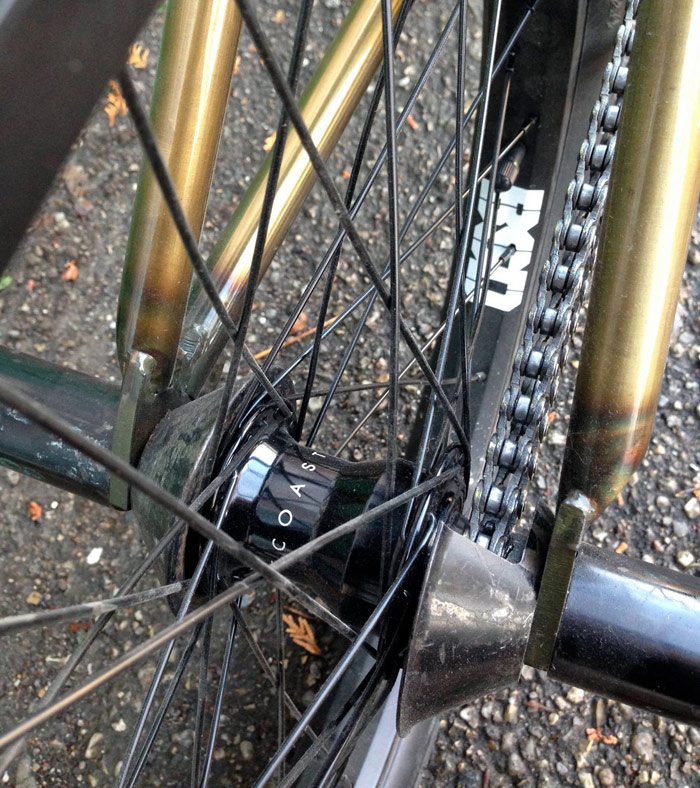 What’s the newest part on your bike?
The frame and all the BSD goodies

What’s the oldest? Does it hold any sentimental value?
The first batch of my frames (10) don’t come with an integrated seat post clamp because I wanted to run my old Redline one. A little homage to Glenn Salyers and our days on Redline.

Are you pretty particular about the way you like your bike setup? Certain geometry, bar height, seat height, tire pressure, etc. or are you pretty flexible?
Getting to choose the geometry of my frame, I was particular. I prefer a longer rear triangle. I’m not into a twitchy bike. I don’t want to be overrating 360s, doing dry ice picks and bruising my heal on my forth peg. I also made the stand over taller than nearly all frames on the market. The strongest geometric shape is a right triangle, and the higher you have your stand over height the stronger your frame becomes. It’s 9.5” on center and the actual seat tube length is 10.5” where it’s welded to the BB. Bar height is no big deal. Never had back problems ever when my bike had 7” bars on it. I set my tire pressure by pumping the tires up to 75psi, forgetting about them until I get a flat, and then repeating above procedure.

How often do you build up a new bike? Do you run parts until they’re dead or do you like to replace things regularly to avoid blow outs when front flipping roofs, stairs and rails?
I’ve been running my final Standard prototype since the end filming period of “Hard Times“. Just about 11 months. I’ve never had a frame last that long. I absolutely run parts until I have to literally throw them away they are so unusable. My last coaster was three years old. I would just replace axles or ball spring bearings or whatever instead of getting a new one. My old driver bearings were out of an old cassette hub which were the wrong size, so I used plumbers tape to make them fit. The way I prevent blow outs is that I only ride parts that are at a high enough quality for me to trust. I’m meticulous when it comes down to the details of my. I’m the kind of rider that if I had one of your company’s parts fail on me then I’m never getting anything else your company makes. Thankfully, all of my Standard, Daily Grind and BSD stuff has never failed me and I all loyal to these brands. I swear by them. 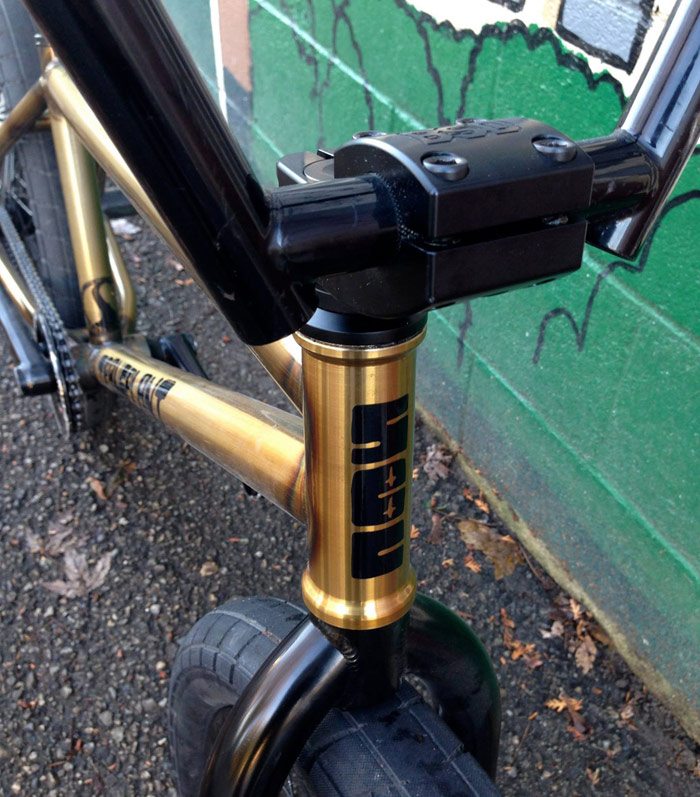 You mentioned you’re running your brand new signature frame from Standard Bykes. Can you tell us all about it? Geometry, special features, etc.?
It’s honestly a fairly traditional street frame. 75 head tube, 71 seat tube, 11.8” BB height, 9.5” stand over, and 13.6” rear end length. The tubing on the down tube and rear chain stays are thicker tubing than what is used on the STA500. The frame is also full OX platinum tubing, which is 30% stronger than the typically used 4130 chromoly. OX platinum tubing doesn’t decrease the tubing strength when being welding together. That’s why there’s no need for gussets on the frame. Plus, it’s all made here in America and I fully believe in supporting America made goods.

What was it like going through the process from idea to design, prototypes and production? Care to talk about that experience?
It was a long process, but a worthwhile one. There were unforeseen holdups with thicker tubing, and little things like that. Standard is a small operation. We can’t do things overnight. However, being able to things in house and not having to purchase quotas like from Taiwan means no overhead and a better sales process.

How long did it take to get your from made from the first idea of doing one to the release?
I started riding for Standard in 2014, and have had three prototypes. With the final version in hand, that’s four total frames in two years. So, that’s two years to get it from concept to completion.

The frame is out now right? How much and where can people get it?
Yes, it is. You can either order them directly from Standard’s website or from my dudes at Albe’s.

Other than the frame, what do you have going on with Standard? Any other signature parts, trips or projects in the works?
We have been loosely discussing handlebars, but since I’ve recently made the change from two to four pieces bars who knows if something will materialize. 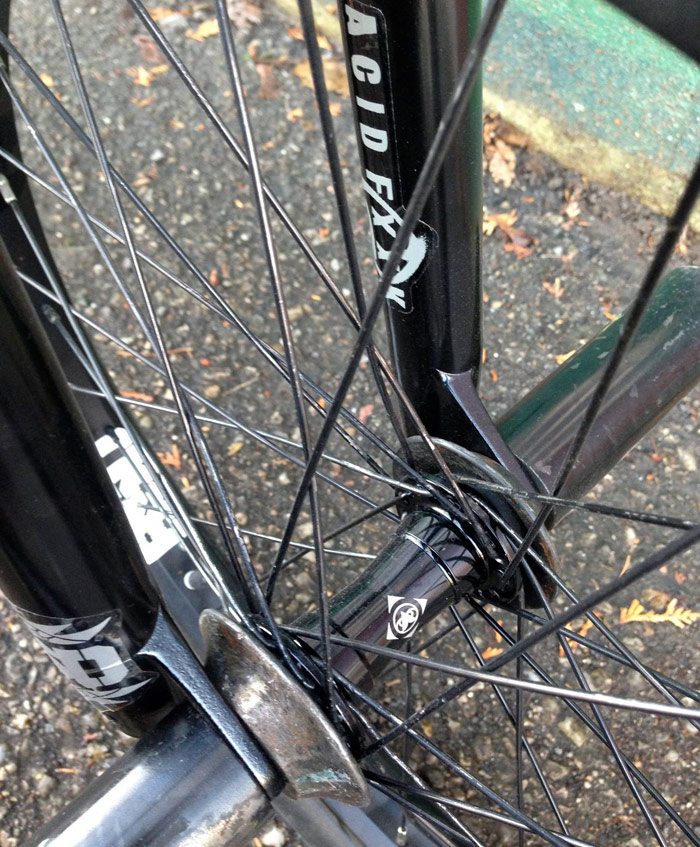 How are things going with The Daily Grind? Do you have anything working with Gremlin at all that you can tell us about?
Things are pretty chill. No major plans or anything of significance to report.

Where does BSD fall into things? Is it more of a homie hook-up?
I was fortunate enough to meet Grant at NORA cup this year. They had over the years helped me get parts and taken care of me. It was nice to put a face to social media conversations. It’s pretty much a homie hook-up with benefits.

What about Albe’s and SCG shoes? Do you have any trips, projects or anything going on with those guys?
Albe’s dudes are always holding the Midwest down. Hyped to be a part of any event they are involved with. Obviously, BACO was amazing. SCG shoes I’ve got a signature shirt in the works, and look forward to being a part of that company’s development.

You’re pretty much always on the move. Where all have you been as of late?
Too many places, hence why I named my frame (the) transplant. I quit my well paying job last spring, got my income tax return, sold a car and have been traveling ever since. I’ve driven coast to coast three times this year. The old VW has 210K on her now. However, I’m broke now and back to work.

Do you have any trips planned for the winter? Maybe heading south for some warmer weather?
The Daily Grind team will be travelling south at some point this year. Not sure when. Everything is loosely organized. You know how BMX trips are. One second you have no plans, and the next you’re headed ten states away.

Have you been filming for anything? Any chance we’ll see some fresh footage pop up online soon?
Honestly, I’ve been pretty chill on filming. If I don’t have a project that I’m working on with a deadline than I’m not pressured to ride. I like being pressured to ride. Makes me do more. I’ve got a Daily Grind edit in the works though.

What have you been doing when you aren’t riding these days? Any new hobbies, jobs or anything?
I’ve been working third shift at UPS. I also enjoy just creating little things or fixing stuff. I’m always tinkering. I have to stay busy or I get depressed.

With 2016 around the corner, do you have any New Years Resolutions or anything?
I’ve got a few things in the works that maybe a dozen people know about. Got to keep that low key though. You’ll see when it’s complete. 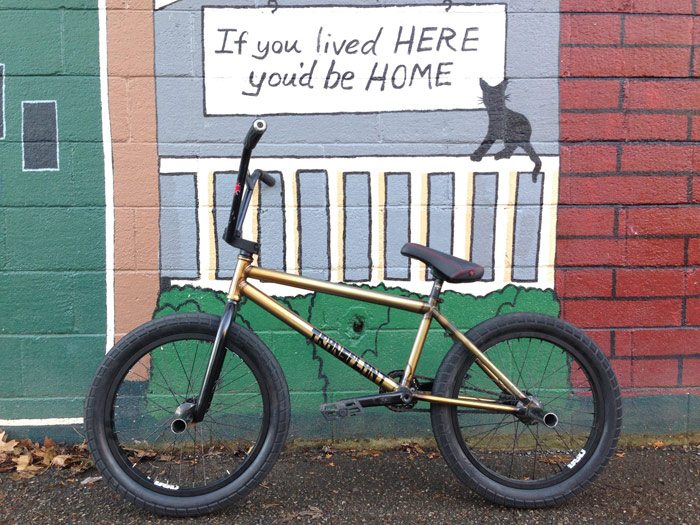 Do you have any shout outs or thanks?
Thanks to my parents, my girl, friends, followers, everyone at Standard, Daily Grind, BSD, Albe’s, SCG and FeebleLife. Also, shout out to UPS for funding my life and the teamster union for healthcare.

Anything else you want to say?
Real recognize real.