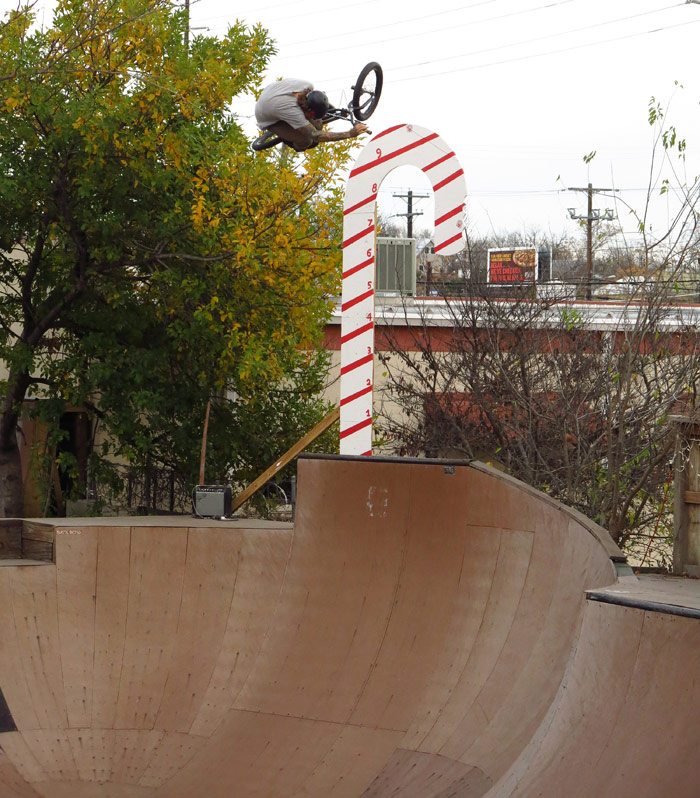 Hey Joe! How’s it going? Long time no talk!
Doing good, thanks. A bit worn out, but good !

What’s new? We saw that the long standing T1 Ramp has come down, which is still crazy to think about.
By now its no secret that it had to come down. We have to move, and the ramp has been taken down due to a hotel planned to be built where we are now. 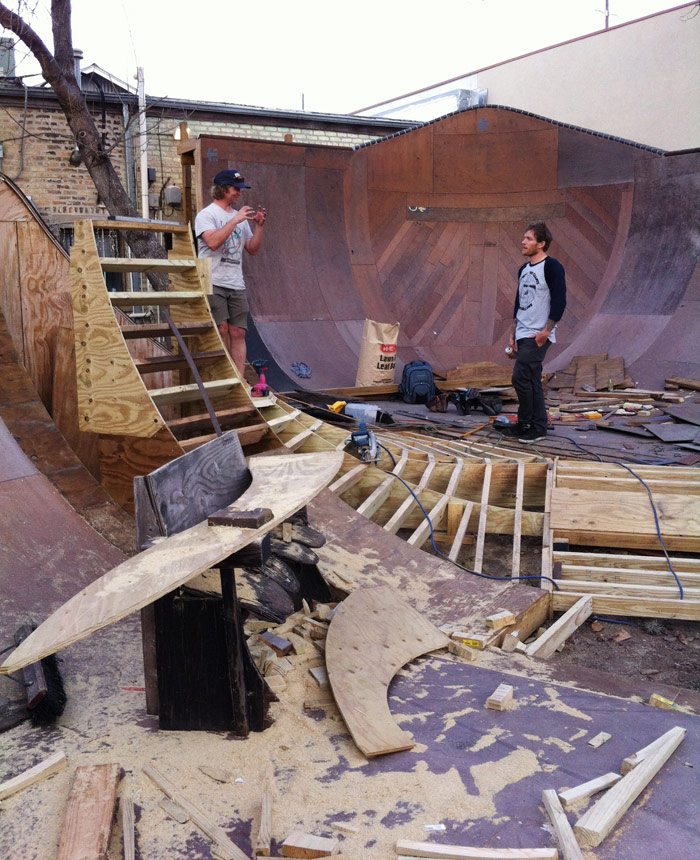 Joe and Ryan Corrigan during one of the many building sessions over the years. 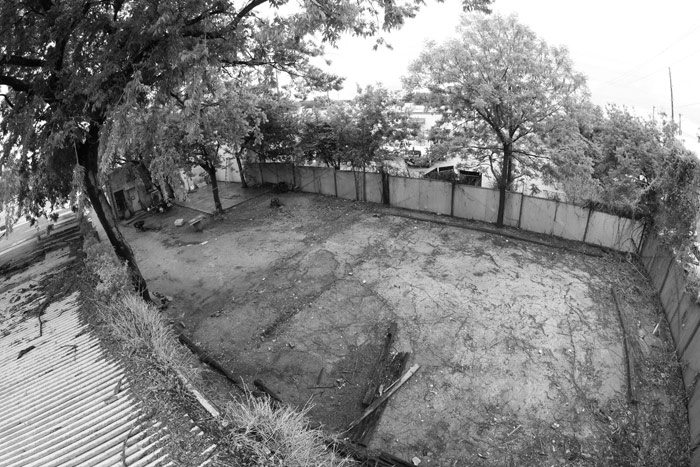 Ever wondered what the yard where the T1 ramp was looked like without a ramp in it?

Do you think there will ever be another T1 ramp or is it too soon to tell?
The ramp was split up between 3 new backyards, so I’m excited to help with them. We built a space at Empire to run T-1 out of as well. I can’t thank Tom and Tina enough!

Speaking of Terrible One, it looks like you guys recently released a fresh batch of frames and parts. How did things go this time around? It looks like plenty of people pre-ordered frames.
Yeah, we did a run of Garrett Byrnes SFA frames again recently that went really well. We have done a batch of Barcodes as well which is something I am always extra excited about. We usually do one run a year for all of our stuff and it seems to work good that way. I can’t thank everyone for their ongoing support.

A little while back we caught wind of a possible Terrible One x Animal Bikes tire. Can you tell us a little bit about how that collaboration all came about?
The tire was an idea I talked to Animal about some time ago. I have been friends with those guys since before Animal even started. I had mentioned to Bob Scerbo at the time, that I wanted to run Animal tires, but there wasn’t any that really did the job when it came to riding concrete and tranny. We talked about it a bit, and he mentioned it to Ralph. They were up for entering into this idea with me. So I worked back and forth with Frank Lam, their designer at the time, to come up with the best possible result with creating a tire geared for riding tranny hard  and fast. With the right compound, there is nothing better for a smooth surface than a slick tire. Unfortunately, a total slick isn’t very easy on the eye, and looking down at a good tread is always something that raises the stoke! It just about jumped out at me that the “T” ,T-1 logo could be slightly altered, mirrored, and would work perfectly for creating some good lines for a tread. Also, I wanted to break up the middle of the tire with a small indentation. I chose to put it dead center, because when riding bowls and such, I rarely am going straight. Thus creating the whole area of when you start to lean over, to when you are really laying into a carve to be unobstructed with any indentions around, or across, that are completely continuous. Giving you a large amount of contact area. The other really cool thing we went for on these, were making them dual compound. This exists in Motorcycle tires, and road bike racing tires. Its when one part of the tire is harder than the other. So with these, the center is one hardness, the “curve” on the tire, where you lay into carves / corners is a softer hardness, and all the way on the very edge is back to the compound the center uses. The center and the edges of the tire, cradle the bit softer rubber on the radius of the tire. The result of this is amazing. When I first put the tires on, I was instantly in love with them. I also think they could be a huge help when it comes to parks that are more slick. And in the future, we have talked about the possibility of developing an even softer tire for that exact reason of slick skateparks. There are some that are flat out ice rinks and are very dangerous. But a tire dedicated to dealing with that, could be incredible. Even though these can be used for everything, all the design that went into these is due to us wanting to make the best tire we could for riding tranny and concrete. I feel like having a more specific direction with what we wanted to achieve, is what makes them feel so good with how I like to ride. So stoked on them! 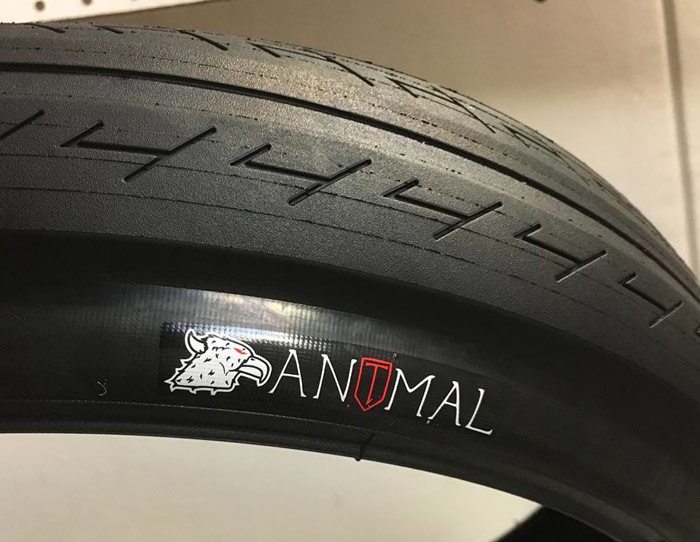 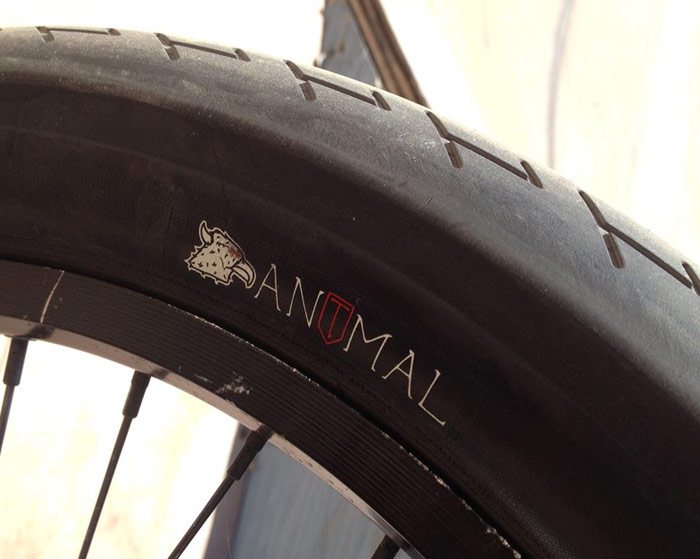 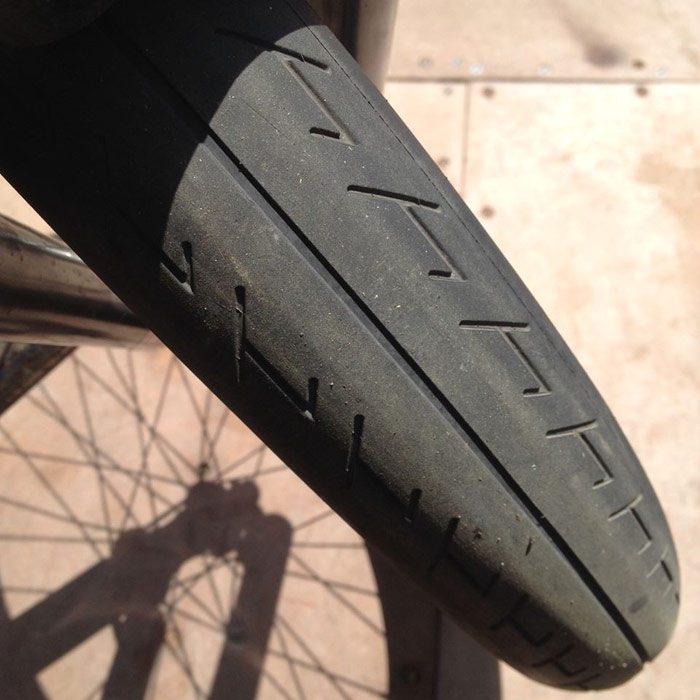 Can you give us any details on the tires like sizes? I would imagine this won’t be coming in any crazy colors like some tires out there these days?
2.4″ and 2.2″. They actually sit wider in your frame though due to the lip on the sides of the tire. I would like to do a slightly skinnier one in the future as well. 2.1″ or something like that. No crazy colors on these either, haha.

When can we expect to see the tires hitting BMX shops and mail-orders?
I know that they had been shipped out and Animal should be receiving them real soon. Hopefully they will be available around the start of May.

A few months back we saw you had a batch of T1 coffee. What’s the story with that? Is there any still available? Any chance we can expect to see more of that in the future?
I love coffee and its always been a little idea I wanted to do. Nothing big, just something fun since I know a few people involved with roasting and selling coffee. I talked to my friend Shawn Rylander, who does most of our artwork now, about helping design a label for it. And when he gave me the artwork for it, it just had to happen, haha. It was too good, the label art then became the driving force in it all. There were a series of long drawn out delays, but it finally happened. It’s fun being able to do different little things like this.

Have you been working on any other collaborations or projects that you can tell us about?
Not that I can think of, haha. 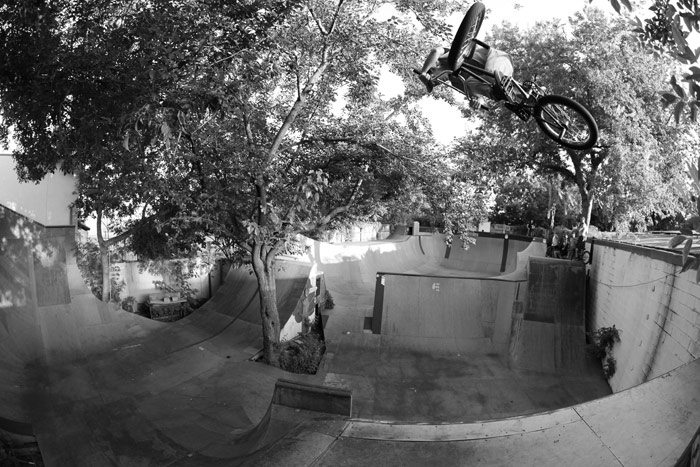 Photo: Joe Rich Chase Hawk was one of those riders you could never get enough of on this ramp.

So, I gotta ask since I know a few people are wondering… Is the Cyclops stem still in the works or has it been put on the back burner for a while?
It’s on the back burner, and I’m not even sure if that stove is plugged in. That’s a long story that I don’t care do get into at the moment. Way too many ups and downs with the people I was dealing with through the years.

I saw you have been working with the Etnies crew on the “Chapters” DVD that’s in the works. Any chance we’ll be seeing a Joe Rich section? That would kick a lot of ass… Just saying.
Haha, thanks Kurt. I’m pretty sure the team is made up of 6 main people currently, so I don’t think you’ll be seeing any full sections from me. But hopefully I will have one or two things that make it in there.

Speaking of filming, it has been a little while since we’ve seen a video with your name in the credits. Have you been working on any other video projects that we can expect to see online any time soon?
I have a lot of ideas, but it all comes down to time and being in the headspace to do things in a way that feels right. The past 6 months have been so hectic for me, but hopefully as the year goes on, I will be able to peruse more of some of the things I haven’t been able to put much time into. Bob Scerbo is always yelling at me for the footage and photos I have that haven’t seen the light of day ever.

Outside of BMX, what have you been getting into lately? Any new hobbies or projects filling up your time?
Most of my time has been consumed in some way by moving over the past 6 months. There was a lot involved with that. Definitely looking to have a bit of free time open up for me soon.

Now that 2016 is well under way. What are your plans as far as travel goes? Anywhere in particular you would really like to get to?
I have been working on getting my van road worthy, and that’s closer than ever. So, hopefully finishing up on that and getting out there!

Do you have any goals for 2016 set for yourself that you want to accomplish?
Right now this year seems like an open book. There has been so much change in my life that I’m looking forward to seeing all that comes from it. I know that’s pretty vague, but I could go on and on. 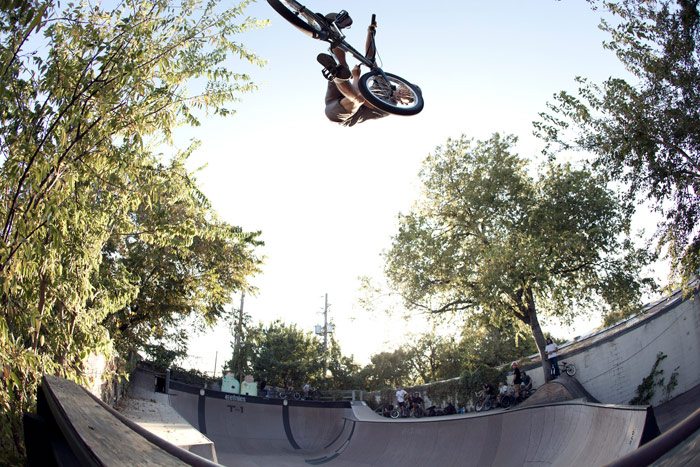 How can people keep up with you these days?
I’m not very consistent with that stuff. I participate some, but I don’t’ get very consumed in it. I post pictures and thoughts from time to time on Instagram but that’s about it. I don’t have a twitter, or a snapchat. T-1 has a Facebook page that my friend Ed Docherty manages. I’m not against any of that stuff, its just not for me. I have a hard enough time balancing my life, and having the time to do things I want to. So anything that puts me in front of a screen, or keeps me inside for longer, I try and keep my distance from. We have been working on a new site for T-1, and that will give me a bit more leeway do put out the things I want to directly. So that should be a big help as a creative outlet for me.

Do you have any shout outs or thanks?
Since we finally finished taking down the ramp the other week, I can’t thank everyone enough that helped in that. There were long hours and many days, and I couldn’t have done it without all of you. I will forever be grateful!

Anything else you want to say?
Thanks for taking the time to do this Kurt!