It’s been a while since we’ve seen a straight up riding edit from Adam LZ, but here’s a new one from his trip up to the Northeast where he cruised a bunch of skateparks and street spots. This is packed full of some excellent riding from start to finish and would highlight suggest you check this one out.

“My favorite riding clips from an awesome trip hanging out with my friends and having a blast. Haven’t made an edit in a while, hope you guys dig it.”
END_OF_DOCUMENT_TOKEN_TO_BE_REPLACED

I think it’s safe to say everyone knows the quality of a bike you can get at Wal-Mart is… Garbage. At the same time, you know you have wondered just how fast you could break one of the bikes riding like you normally would on your bike. Adam LZ and Spencer Foresman decided to pick up a few bikes and play a game of B-I-K-E at Candyland Skatepark on the bikes. Watch as these guys go head to head and see who pulled off the win (if their bikes hold out long enough). Spoiler alert: One of the bikes didn’t even make it out of the parking lot. (Shocker)

END_OF_DOCUMENT_TOKEN_TO_BE_REPLACED

Stranger dropped this round of Tuesdays At Tip online today for your viewing pleasure. Although it was filmed a little while back, this footage is loaded with heat from the crew getting down on the ramps at Tip Plus. Hit play and see what went down!

“While on the Sneakatour a few months back the guys filmed a #tuesdaysattip episode out back on our ramp setup. Riders include Caleb Quanbeck, Lewis Morgan, Adam LZ, Michael Harkous, Abdullah Alkhalili.

Filmed and edited by Miles Rogoish”

END_OF_DOCUMENT_TOKEN_TO_BE_REPLACED 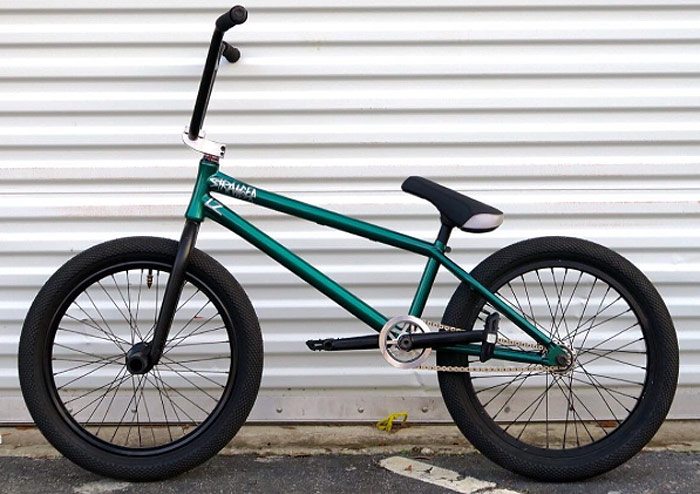 Here’s a sneak peek for you Adam LZ fans out there. It looks like he’s running a prototype sample of his new signature frame from Stranger! Not much for information on the frame, but just looking at it, it appears to be using a hydro formed top and down tube similar to the Wethepeople Envy frame, possibly a steeper 76-degree head tube angle (guessing by looking at the photo), a lower seat tube height (Possibly upper 7″ length?) and investment cast drop outs. The frame also features a metallic dark green color that looks good, too. Expect full details closer to the release. (Full details on the frame here: Stranger BMX – LZ Frame)

It’s funny how much a little rain can change up how well a rider can actually ride. Adam LZ and Jimmy Oakes recently had a little game of bike that had a little rain mixed in to really make it a challenge. Check out the video they put together from the game and see who took the win!

“Riding wet metal skateparks is never a good ideas, but Jimmy and I decided would view it as a challenge and play a quick game of BIKE.
Shirts and Stickers – http://LZBMX.com

We actually filmed this video like two months ago, I just had it on my computer and kept deciding to edit other videos before it. This was a pretty chill day, we were both tired (and it was raining) so the level of riding isn’t as high as usual. Regardless, we had a pretty good time and I thought the video was still enjoyable enough to warrant an upload!

Personal update: I’m now back in Florida (with bert), and almost settled into my new place. Moving all my stuff in has been taking forever, but I have my CPU stuff all set up so I can start making videos again. School is back in session as well, but it doesn’t look like it’s going to affect the videos that much.

END_OF_DOCUMENT_TOKEN_TO_BE_REPLACED

Adam LZ and his girlfriend, Nicole, made a trip up to Canada recently to hang out with some fans, ride Joyride 150, visit shops and do some touristy stuff. He pulled out the camera to document the entire trip for the latest webisode. Hit play and take in everything!

“How could a little road-trip turn into such an awesome experience? World famous JoyRide 150, roaming around downtown Toronto, and meeting HUNDREDS of fans definitely had something to do with it!

I don’t even know where to begin with this description… But I should probably start with a backstory. You guys have been asking me to come out to Canada (specifically JoyRide 150) for YEARS now. It was on my list of “must-dos” this summer, but I was having a hard time finding someone to go with. None of my friends had passports, and none of them wanted to go out of their way to get one. I wound up waiting until Nicole came down and taking the 8 hour road trip up there with her. I was kind-of worried that a BMX trip would be boring for her, but it was literally the best time (IMO) that we’ve ever had together.

We stopped at JoyRide 150, a bike-only skatepark in Toronto filled with everything from box jumps to cross country MTB tracks. There were literally 150+ kids that showed up (we checked with the front desk) to hang out and ride with us. I can’t get over how crazy it was to ride with that many people and hang out with all our fans that know so much about us and our videos. Literally every single person was insanely nice, especially JoyRide staff, and Matt O’Brien who helped film all day!

The “chill” day riding around downtown Toronto was definitely my favorite. Just exploring a new place on bikes and seeing city-culture is one of the most fun things ever. I didn’t have my helmet on because I wasn’t really planning on riding (I hurt my foot at joyride), but when we bumped into some riders I couldn’t help but get some tricks in (you guys know how it is). Huge shoutout to the awesome Goonsquad for helping me film! I’m really bummed my GoPro started acting up with the audio, but hopefully you guys don’t mind.

On our way back home we stopped at A1 Cycle in Brantford, ON for a quick meetup/ride with some more fans. Definitely was surprised to see so many people come out in such a little town! The Canadian BMX scene is amazingly strong and on top of the amount of riders, their positive attitudes are really what will move our sport forward. We hung out and made our way over to their local park followed up by some free pizza at the shop! Huge shoutout to A1 Cycle, Zak Longhurst for filming, and his mom for the Starbucks!

Side note: A1 Cycle (Brantford, ON) and Harvester Bikes (Markham, ON) both stock LZBMX clothing if you don’t feel like placing an online order!

To sum up what might be one of the longest YouTube descriptions ever I’d like to say thank you. Thank you to every single one of you guys that came out to meet up with us, took pictures, had us sign stuff, or even gave us something. It’s insane to be treated this way when all we really do is go out and film ourselves having fun on bikes. Thank you to all of you who wanted to come, couldn’t come, or even those of you who are watching this video. I just can’t thank everyone enough, all the shops, parks, and people that helped film, but ESPECIALLY Nicole. It takes one very special girl to take an international BMX road trip and enjoy it yet. She loves you guys as much as I do, and it’s not surprising that she signed just as many (if not more) autographs than I did at parks.

As a closing note, just remember BMX isn’t all about being the best. Look at me, look at Bert, even look at Nicole. We aren’t by any means the best riders in BMX. We just have fun and try to present that in the format of entertaining videos. There is absolutely NO REASON every single one of you guys can’t be doing the same thing. Just remember to keep it fun and the views will come.”