Billy Perry coming through with part 2 from his trip to the United Kingdom where he spent a few days checking out spots with Josh James and the Boqer crew. The weather wasn’t the best, but that didn’t keep a proper indoor skatepark session, a little outdoor session and some dirt bike time. Check it!

“In typical English weather fashion, it rained for two days in the middle of our UK road trip so we headed down to The Base Skatepark for a session. The Box Jumps, smooth rhythm section and foam pit ended up making it one of my favorite indoor skateparks yet. The last day of the trip consisted of a chill outdoor skatepark session and some dirt bike riding at the quarry in Josh’s hometown of Cheltenham.” – Billy Perry

As some of you probably know, Billy Perry recently spent some time over in the United Kingdom for the Street Series. After that he met up with Josh James and the Boqer crew to do a little road trip for a few days. Here’s a look at what they got into during the first two days of the trip!

“This is Part 1 of the UK BMX road trip including day 1 when the Boqer crew picks me up from London and we head down south to a what we thought was going to be a great skatepark. Day 2 consisted of us heading to the city of Brighton to ride some famous street spots but we ran into some very bad luck and injuries. Stay tuned for Day 3 and Day 4 where we ride England’s biggest and best skatepark!” – Billy Perry

END_OF_DOCUMENT_TOKEN_TO_BE_REPLACED

We’ve seen plenty of games of Calling The Shots over the years, and most don’t really have any major consequences other than “losing” if the tricks aren’t pulled. Well, today, that changed when Boqer123 dropped their first “BMX Paintball” round of Calling The Shots. In short, you get a trick, if you don’t pull it in 3 goes, you get shot. So, you have a pretty solid incentive to actually pull the trick. Take a look!

“We came up with the paintball idea, and wanted to do a calling the shots involving getting shot. Stoked to finally put this idea into reality, this was one of the most fun days at the skatepark we’ve had in ages. Check it!”

END_OF_DOCUMENT_TOKEN_TO_BE_REPLACED 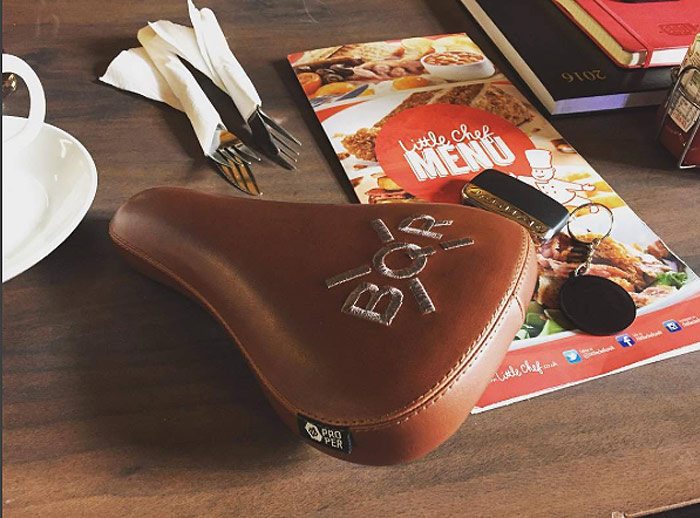 Due for a new BMX Seat? Here’s a little sneak peek at the new Tripod seat that Proper Bike Co. are working with their team rider Josh James AKA Boqer123 that will be hitting BMX shops and mail-orders that carry Proper in about two weeks. It sounds like the seat will be available in two colors (no word on the 2nd) and it appears to be a leather seat with a stitched “BQR” logo and stitched side tag. All in all, it looks like a real clean seat to us.

END_OF_DOCUMENT_TOKEN_TO_BE_REPLACED

The latest webisode from Boqer123 for you to check out! This time around Josh James and crew make their way to The Base Skatepark for a session with a bunch of people, along with Mark Webb who absolutely crushed the place. The first half is mostly a mix of riders, then the second half kind of toward the end is just a ton of Mark Webb footage that we know you will want to see! Enjoy!

“So it was Tom Copelands (@tomlandsflat) birthday, and he wanted us to all come down for a session. Headed down to his home-town of Bognor Regis which is near Portsmouth, fucked around a bit and got a session in at The Base Skatepark. We ended up meeting Mark Webb down there and he was sound as fuck to let us film. Massive shoutout to everyone in this video, the trip was one of the funniest we’ve had. Such a sick crew even though we’ve only met them a few times, hopefully it shows in the video!”

END_OF_DOCUMENT_TOKEN_TO_BE_REPLACED

Josh James and the Boqer123 crew made their annual trip out to the NASS festival over in the UK. They pulled out the camera and documented the whole trip from the drive to the live music, riding and more! Take it all in!

“We’ve been meaning to go to NASS festival and film for a few years now, and this year RideUK kindly hooked us up with some tickets and media passes, so we went along and filmed what we could. We had a bit of a nightmare weekend really due to a few reasons (motorway crash, mic we bought the day before didn’t record audio, and a few other things) but we still managed to have a sick time and film a bit showing what NASS is about every year. Enjoy”

END_OF_DOCUMENT_TOKEN_TO_BE_REPLACED

For the latest webisode from Boqer123, Josh James and the guys load up for a quick road trip over to Surrey for some BMX riding and good times! These guys cranked out some solid clips and a lot of laughs as usual! Take a look!

“This is the average BMX roadtrip in the UK. Me, Mick and Clem were chilling one night and realising we all had the next 2 days free, we spent about 5 hours trying to decide somewhere to trip to. Ended up deciding the Surrey (near London) area as it was around 3 hours away and it had a trampoline park (pretty much the deciding factor haha). We booked a hotel and headed down the next morning. Well, early afternoon… I woke up late.”