The NASS fun continues. Here’s a look at what went down during the Ghetto Wallride Jam that Greg Illingworth threw! It’s always the ghetto setups that look like a ton of fun to ride.

NASS is going down this weekend over in the UK with a ton of the UK’s finest BMX riders dropping in. Here’s a quick video from practice for the dirt contest. Plenty of flips, whips, barspins and spins already going down… The finals should be a wild one.

“Tom Isted and more take you through the BMX Dirt course at NASS 2017. Good set up!

With NASS coming up next month, we get a look at their plans for how things will look for the setup for BMX to ride. Above you can find a drawing of the street course, then below you can find Dirt, Flatland, Park and Vert. Flatland and vert are a little obvious since those two require a flat space and a half pipe, but otherwise the park and street courses are looking rad. Get more details below!

2016’s Dirt Contest was huge but 2017 promises to be even bigger. So NASS have returned to Gorilla and BMX legend Kye Forte to take Dirt to the next level. Expect huge gaps and gravity defying steps and a tough contest as reigning champion Nick Bruce looks to retain his title against some serious competition.

The Radlands is returning to NASS once again with a specially designed super smooth stage to allow the finest flatland operators to perform their art the way it should be done. The Radlands will also play host to the B-Boy Stage.

Designed by the country’s leading park designers, FourOneFour, the pro park is the biggest stage in the European action sports calendar and it’s where the world’s best talent will fight it out for glory, bragging rights and an enormous prize purse. Huge obstacles, monstrous transitions and highly intricate street sections will test each rider’s ability in the air, as well as their skills with smooth lines.

The Jewel in the NASS crown is the awe-inspiring 14ft vert ramp designed to the specifications of vert legend Tony Hawk. One of the biggest ramps in Europe, this will be the stage for the world’s best vert riders on two wheels and four and will make for an incredible, gravity defying contest as Vince Byron and Jesse Thomas both look to retain their status as World Champions.

“With the iBMXFF World Championships returning to NASS for the second year in a row organisers have now revealed the course that will push the boundaries of each rider, testing their mettle as they compete for the title of World Champion from 7 th – 9 th July.

The public park is the place for everyone to come along and get involved and shred, pure and simple. With plenty of ramps, rails, transitions and street spots there’s plenty in the pro park for you to practice on… and who knows practice enough and you may find yourself in the pro-park in 2018.

A new addition to NASS 2017 is the Pump Track. Over the course of the weekend festival goers and riders of all disciplines will get the chance to ride this plywood rollercoaster with the fastest set to win some awesome prizes. 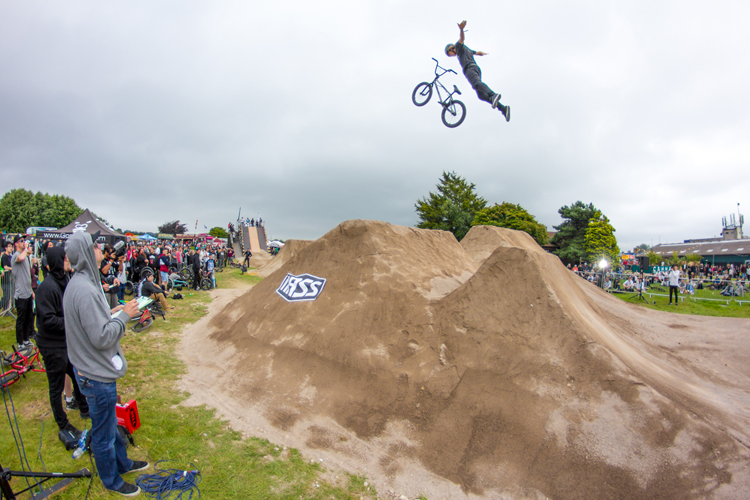 With some of the top riders at NASS last weekend all throwing down on the ramps, dirt and flatland stage, there were bound to be some crashes! Above is a compilation of crashes that went down for you to check out. Some are a little rougher than others, but it doesn’t look like anyone got too beat up, which is always a good thing.

Yesterday Nick Bruce dropped BMX Worlds In England Part 1, now today we get part two that picks up from Day 3 for park and dirt practice, followed by park and dirt qualifying at NASS. After that we get a look at day four as Nick locks down a medal in dirt and more. Check it all out!
END_OF_DOCUMENT_TOKEN_TO_BE_REPLACED

END_OF_DOCUMENT_TOKEN_TO_BE_REPLACED

We were wondering when NASS would be uploading the highlights from Flatland finals, and now they’re online. Hit that play button to check out some incredible riding from Raphael Chiquet, Dan Hennig, Pakphum Poosa-Art, Terry Adams, Jean William Prevost, Matt Wilhelm, Takahiro Ikeda, Vicki Gomez, Alex Jumelin, Dominik Nekolny and Matthias Dandois! Below you can find the final results…