BSD dropped their new “Recording” video, and it’s a 15 minute absolute MUST SEE BMX VIDEO! With riding from most of the squad in 7 different countries, you know they ended up finding plenty of amazing spots to stack clips on, and as always Dave Sowerby crushes it with the film work!

“Get ready to press play on the BSD Recording…

This is a recording….

Like they always say, time flies when you’re having fun. The “Transmission” DVD was released two years ago already. BSD decided to go through and pull out the best footage and pack it into this dialed edit for your viewing pleasure. If you want a reminder of how good the “Transmission” video is, this is a good reminder. After you watch this, go re-watch the full video right here — “Full “Transmission” video!

“Having missioned around the globe for two years stacking ridiculous riding clips with the BSD team on over 10 trips it’s nearly impossible to choose the best of them, but here we go. This edit marks the 2 year anniversary of Transmission’s world wide premiere in Glasgow with a selection of just some of the highlights from Dan Paley, David Grant, Sam Jones, Mike Jersey Taylor, Matt Allpress, Jason Teet, Luc Legrand, Liam Zingbergs, Kriss Kyle, Reed Stark and Alex Donnachie’s sections from the 2016 BSD Transmission DVD.

Filmed and edited by
Dave Sowerby

Check out what went down at the Jingle Buels Jam at Unit 23 Skatepark in Glasgow!

Whenever Unit 23 Skatepark throws a jam, you know it’s going to be a wild one! Here’s some highlights from the Jingle Buels Jam that went down the other weekend. As expected, it was a packed house and a ton of great riding went down from locals to the Pros like Kriss Kyle. Hit play and take it all in!

“It’s been a while since we’ve seen a jam at our local Unit 23 skatepark in Glasgow, Scotland but Chaz Mailey and the crew there thought it was about time to get everyone together again. The invites were sent, Bucky put on ice and the big bowl in Hall 1 was the venue. Sit back and enjoy a whole load of roasting from the likes of Kriss Kyle, Chaz and Connor Mailey, young Kieran Reilly and more.

“Having not put on a BMX event at Unit23 for a minute or two, we decided to have a bowl jam to end the year. What started as a little ‘friends only’ bowl session, soon turned into a bit of a jam, with speakers, flyers, prizes and Bucky. It’s cool to see the BMX world come together and make things like this happen, even north of the north. We’d like to thank our sponsors for helping us put this little jam together, BSD, Source, DIG, Endless & Seventies. A special thanks goes out to Jimmy’s Iced Coffee for being so down to help out, and a massive thanks to everyone that showed up and made it such a rad time! Here’s to next year! Here we go.” – Chaz Mailey / Unit 23

The BSD team decided it was time to spend some time exploring the streets of San Francisco and San Jose in Northern California. Here’s a super dialed video featuring the crew going to work on all of the amazing spots they came across from rails and ledges to huge curved wallrides and more. Everything about this video from the riding to the spots and film work is amazing, so hit that play button because this is a MUST SEE!

“Join the BSD team in the streets of San Francisco and San Jose.

Filmed and edited by Dave Sowerby.”

Earlier today, the X Games unleashed the Real BMX 2017 videos that we have all been waiting to see! We posted up each individual section, but figured it might be easier for people to check out all the videos in one place without having to click around so much. Below you can find all 6 sections from the Real BMX 2017 video contest, which all turned out absolutely amazing. Each rider and each filmer brought their own unique style of how they like to do things and it ended up creating very dialed BMX videos that you won’t want to pass up. After you check out each of the videos, make sure you head over to the X Games website to vote on your favorite video. Your votes will go toward the fan vote that will be announced in a few weeks. Also make sure you watch the full behind-the-scenes show on ABC on June 24 where the judges will announce who got their vote and who took the top spot and why! Until then, enjoy all of the Real BMX 2017 videos below…

Let’s start out with Chad Kerley‘s section that was filmed and edited by Christian Rigal!

Next up, we have Alex Donnachie‘s section that was filmed and edited by Dave Sowerby!

Keep on rolling. Here’s a look at Nathan Williams‘s Real BMX 2017 section that was filmed and edited by Peter Adam!

Back for another round after winning voters choice last year, Colt Fake brought the heat once again with filming and editing being taken care of by Darryl Tocco once again!

Last but not least, here’s a look at Demarcus Paul‘s section that was filmed and edited by Mike Mastroni!

That is all six of the BMX videos that were produced. Like we said up top, these all turned out absolutely amazing and everything from the riding to the film work really kicked ass. We are having a hard time picking a favorite video ourselves, but you can VOTE for your favorite video over on the X GAMES WEBSITE if you know which one is your favorite!

Which X Games Real BMX 2017 video was your favorite? What were the reasons why you liked the video? Let us know in the comments below!

The 2017 “Real BMX” videos from the X Games have arrived! Here’s a look at Alex Donnachie‘s section that was filmed and edited by Dave Sowerby! As many of you know, Alex and Dave are no strangers when it comes to filming after working on plenty of BSD video projects over the past few years. It’s safe to say they had no problem going to work on this project to film one hell of a video part!

“Check out Alex Donnachie’s entry into Real BMX 2017, the all-video, all-street BMX contest brought to you by ESPN and “The World of X Games.” Vote for your favorite at XGames.com/RealBMX, then watch the full behind-the-scenes show on ABC on June 24.” – X Games

What do you think of this video? We want to hear from you! Let us know what you think in the comments below!

The BSD crew head back undercover for another banger of a BMX video… Here is a look at “Undercover 2”!

You know you’re in for something good when BSD drop a video featuring Kriss Kyle, Alex Donnachie and Dan Paley getting down at Unit 23 Skatepark over in Scotland. For “Undercover 2“, these three follow up their original Undercover video that came out just about two years ago with even crazier riding. Add in some dialed film work and you have a must see BMX video you cannot pass up watching! Get on that play button and watch “Undercover 2”!

After you watch this video, make sure you give the original Undercover video a watch! 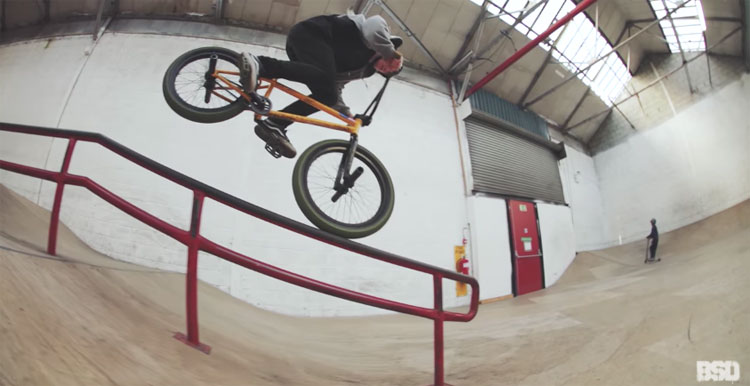 “As a follow up to the original ‘Undercover’ video, we are stoked to bring you ‘Undercover 2’. Watch Kriss Kyle, Alex Donnachie and Dan Paley’s indoor sessions over the winter at Unit 23. Guest clips from Chaz Mailey.

Filmed and edited by Dave Sowerby.”

Here it is in all of its glory! BSD have released their entire “Transmission” video online for your viewing pleasure! This is available on Youtube above, of Vimeo below if you’re having issues. The video is pure gold from start to finish, so go ahead and grab yourself a drink, kick back and enjoy!