Last night the BMX Dirt finals went down at the X Games in Minneapolis, and there was no shortage of wild riding going down on one of the better dirt setups that the X Games have had in past years. Here’s the full replay of the live broadcast giving you a look at everything that went down during the contest. Below you can find the top 3 runs that landed Logan Martin, Brandon Loupos and Dawid Godziek on the podium!

The X Games have started going off in Minneapolis. Here’s a look at how Dawid Godziek qualified first for BMX finals on Saturday during the BMX Dirt Qualifier. If you want to check out more from the contest, the complete live stream from the event can be found below! It’s safe to say we’ll see plenty more bangers on what looks like a real dialed dirt course. It’s been a few years since we’ve seen anything added beyond some straight jumps and a quarterpipe, so it looks like the guys who ride dirt on the regular are digging this setup more.

“Watch the FULL BROADCAST of the BMX Dirt Elimination event that just went down LIVE at X Games Minneapolis 2019.
”

Yesterday it was announced that Dawid Godziek is now doing it for Colony BMX in Poland! Now, we get a closer look at his brand new Sweet Tooth setup! You can check out a quick Bike Check with a full parts list and a handful of detailed photos over on the Colony website now!

Expect to see plenty more from Dawid and Colony in the near future.

Colony have added Dawid Godziek to their team in Poland! 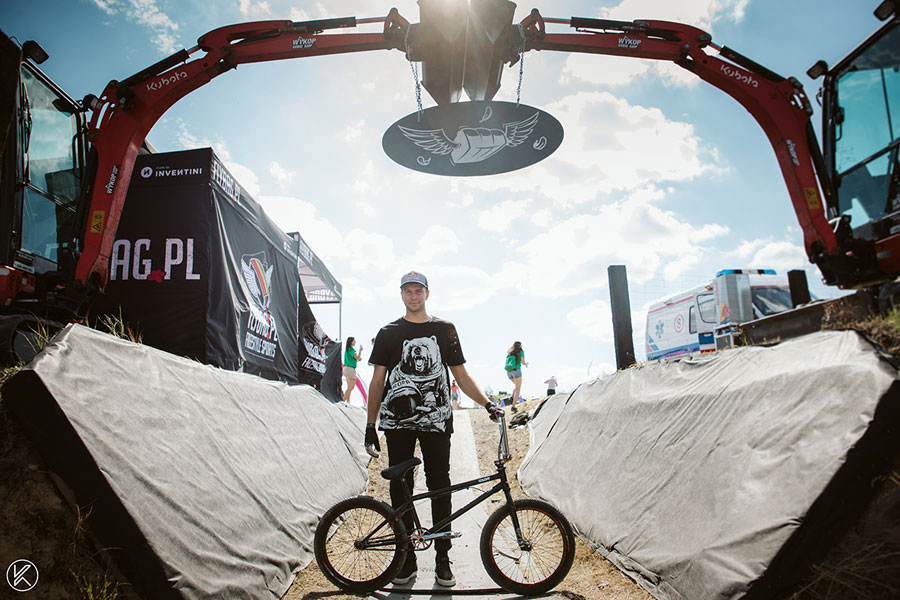 Here’s some sponsor news for you! Colony BMX have added Dawid Godziek to their line up over in Poland through Par BMX. As many of you probably know by now, Dawid is an absolute machine on a bike, so expect him to be throwing down wild tricks on a Colony setup now!

“We are stoked to welcome David Godziek to the team. David reps Colony out of Poland and holds his own solid as a rock on a bike, peep his Instagram account for more proof. Bike check coming tomorrow!

Thanks to AVE BMX for helping David out with everything. Photos courtesy of Kamil Krasówka.” – Colony BMX

“BMX Triple Challenge has proven to be the premiere event for pushing the level of dirt riding and BMX as a whole. In its second year, the two jump, winner takes all has continually brought out the gnarliest riding from the best riders in the world.

Check out the 3rd and final event from the 2018 Toyota BMX Triple Challenge!” – Monster Energy

Another wild #toyotabmxtriple in the books. Congrats to @davidgodziek on today’s win and the series overall. Here’s a couple bangers from the best trick: Jake Leiva (@jake_leiva), decade-to-360 tailwhip for the Best Trick win, and Brandon Loupos (@brandonlouposyo) with a tailwhip cashroll. ?? #bmxdirt #toyotabmxtriplechallenge #bmx

While a large portion of BMX was focused on the FloriDeah Swampfest this weekend, the latest stop of the Toyota Triple Challenge series went off down in Texas. During the contest, there was no shortage of bangers going down and two tricks that Keith Mulligan shared are absolute mind benders… Jake Leiva pulled off a Decade to 360 Tailwhip and Dawid Godziek pulled a Tailwhip Cashroll. It goes to show the level of progress that BMX is at when it comes to sending it over some massive dirt jumps. Both tricks make little sense and almost seem to defy logic of the way gravity, physics and every other force works. Jake’s Decade to 360 Tailwhip is more like a Decade to Tailwhip to 360… We’re not sure how he magically stopped and started spinning in the process. At least it appeared to be that way. Either way, both tricks are absolute bangers and we figured this was well worth a share for people to check out. Expect to see more footage of these tricks and the whole event soon since Monster has been putting out videos after each stop of these contests. We’ll get the videos posted up as soon as they surface, so make sure to check back!

Check out all the bangers that went down during the Toyota Triple Challenge in Anaheim yesterday!

The Toyota Triple Challenge series for 2018 kicked off in Anaheim, California this weekend and the roll-in was packed with a ton of familiar faces that were ready to throw down on the two big doubles and quarterpipe. Here’s a highlight video showing you what went down!

Once the dust settled, Dawid Godziek landed in 1st place with Kyle Baldock in Second and Colton Walker in 3rd!

“If this is a taste of what’s to come in 2018, it’s going to be an absolutely insane year. Watch countless bangers from Dawid Godziek, Logan Martin, Kyle Baldock, Colton Walker, Jake Leiva, Kevin Peraza, Jacob Bailey, Pat Casey, and more from the first Toyota Triple Challenge of the year!” – Vital BMX

The lineup for the 2017 Nitro World Games has been set after a round of qualifying for the BMX Trip Hit competition that brought in 25 of the best ramp riders to throw down. Below you can check out a highlight reel of some of the crazy riding that went down, along with the final results of just who will be heading to the actual contest this summer. Take a peek!

“Nitro World Games qualifying doubled down on Tuesday, with both FMX and BMX Triple Hit competitions happening simultaneously. The BMX Triple Hit contest pitted over 25 riders from around the world, all vying for just eight slots in the semifinal round and a chance to advance to the finals on Saturday, June 24 at Rice-Eccles Stadium.

Riding on his birthday, Nick Bruce certainly had something to celebrate on Tuesday. He came out of the gate strong, scoring an 8.94 and stomping a perfect landing on his first run. Bruce wowed the judges even more on his second, and would never relinquish his lead. Irek Rizaev also sent it on his first run, serving notice with a masterful display that shot him into second place. Rouding out the top three finishers, Kenneth Tencio also quickly got the judges attention with big combinations. The remaining qualifiers are Daniel Sandoval, Colton Satterfield, Dawid Godziek, Marcus Christopher and Andy Buckworth.

Prior to Tuesday’s qualifiers, 2016 BMX Triple Hit winner Colton Walker was invited directly to the finals this year. Logan Martin and Alex Coleborn, who joined Capron the podium last summer, are invited directly to the 2017 semifinals. In addition, Brandon Loupos, Kyle Baldock and Brian Fox have been invited by the competition committee to the 2017 semi’s. Two more wildcard spots will be chosen to round out the 15 athletes chosen for the semifinal field.


Nitro World Games tickets are available now at Smith’s Tix as well as at nitroworldgames.com.”