If you want to know what a good time looks like, check out what went down at the Texplex Dirt Street Contest the other weekend!

Despite a little wind, there was a huge turnout, plenty of great riding and good times during the Texplex Dirt Street Contest down in Texas last weekend! Basically the park is a skatepark built out of dirt and a few ramps. Here’s a video Empire just uploaded giving you a look at the highlights from the day! This place looks like a ton of fun to ride! Get on that play button and enjoy!

“The first Dirty South contest at the TexPlex park was held on November 18, and the shredding was excellent! despite some north Texas wind interference, participants from points near and far threw down their best moves. thanks to TexPlex and Chad Osburn for putting on a great event, and to all the sponsors who helped!

embedding this video without the express consent of Empire BMX, Inc. is strictly prohibited, and you will be mocked on social media if you do it, no-consent-asking appropriatin’ haters” – Empire BMX

The annual Halloween Jam at 9th Street Trails in Austin, Texas is always a good time!

Empire BMX coming through with a video giving you a look at this years 9th Street Halloween Jam! As expected, there was a huge turn out, a ton of great costumes and plenty of dialed riding going down from the pros and locals to the young guns. Take a look at what went down!

“Another spectacular 9th Street Halloween Jam is in the books! Thanks to everyone involved in keeping this amazing spot going, all the sponsors, and everyone who participated. 9th Street is a pearl tucked inside the crazy oyster that is Austin, and we are all very fortunate that it’s still kicking after all these years. Make sure to follow @9thstreetbmx on IG, and check out www.9thstreetbmx.com for details on how you can contribute. ENJOY YOSELF!

It’s always a good day when Steven Hamilton has a new video to check out! Empire just released this new video featuring Steven doing what he does best… Riding unique spots on his bike and skateboard with a creative and different approach to spots. This is a damn good watch from start to finish, so hit that play button and enjoy!

“Steven takes you on a journey through time and space, relentlessly driving his unmatched spot awareness and trickability through your gray matter like the trillion trillions of neutrinos passing unimpeded across the barren expanse of our solar system, detached from the choking constrictions of irrational emotional attachments and immune from the distractions and limitations forced upon us by a moral code rooted in the fear and uncertainty of ancient civilizations who gazed upon the sky thousands of years ago, moved to make sense of the void, unwilling or unable to look inward upon the true nature of truth: that we are beings of stardust, empowered by the very thing that simultaneously subjugates us and sets us free, a physical body ingeniously encoded with spiritual profundity” – Empire BMX

Empire BMX dropping some knowledge on you on this Friday! Here’s a fresh How To video where Matt Nordstrom gives you a bunch of tips and examples on just how to get Kickflips done right on a BMX bike. Hit that play button and take it all in, then grab your bike and flick a few!

“Matt Nordstrom kicks down some knowledge and shows you the spins and outs of the kickflip!

Want to learn how to toboggan, but you don’t really know where to start? You’re in luck because Empire dropped this new How To video where Brett Silva gives you plenty of advice and examples to show you how to toboggan like a pro. If you say Brett’s “Grow Up” Part, you know Brett has this trick just about as perfect as it can get on just about any setup, so who better to teach you… Right!? Check it!

“Brett Silva breaks down how to do the toboggan, a required trick for anyone looking to achieve a higher level of consciousness

Want to learn how to suicide no hander on a BMX bike? The crew at Empire caught up with Aaron Ross to learn everything about the trick from where to start to how to suicide no hander like a boss. This video is pretty short and sweet, but Aaron gives some great advice and plenty of examples at House Park where he does them flyout and in the middle of lines. Check out the video below!

“Aaron Ross breaks down how to do the suicide no-hander, an often overlooked trick in today’s politically correct climate!

Aaron breaks it down in 3 steps.

1. Level out and let go of the bars. Stretching your arms as far back as you can.

2. Start looking for the bars and keep your eyes on them so you can easily get your hands back on the,.

3. Put your hands out front and then find the bars. If you kept your eyes on them, it will be much easier to grab back on.

That’s about it when it comes to how to suicide no hander on a BMX bike! After you watch this video, grab your bike and start sending the trick! Start out slow and take your hands off a little, and slowly start stretching them further and further back until you can’t go any further. This is one that will take a lot of practice and time to convince yourself to let go, but once you get it dialed in, you can throw it into the middle of lines and tricks making for some interesting riding.

Check out more from Empire BMX!

Check out more from Aaron Ross!

What do you think? Have any questions? Do you have any tips Aaron missed you think people should know? Let us know in the comments below! 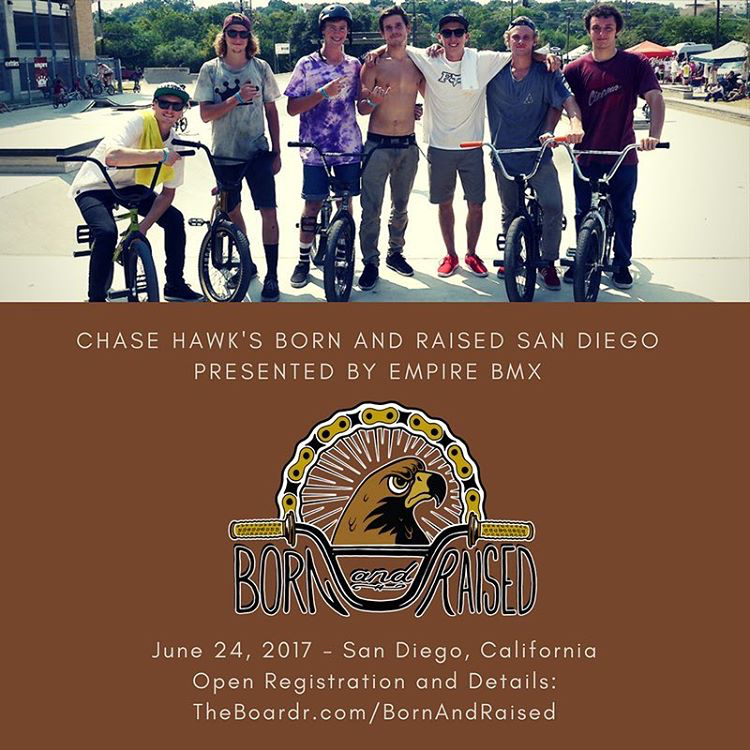 The annual Chase Hawk “Born and Raised” contest presented by Empire BMX is getting two stops this year and the first one is heading West to California! The contest will be going down in San Diego on June 24th and registration is now open at TheBoardr.com/BornAndRaised! They haven’t announced the location yet, but there’s a few spots like the Claremont Park or OB Skatepark that would work out real well for this event. We’ll keep you posted once we know more. Until then, get yourself registered!

big announcement! the Chase Hawk #ChaseBornAndRaised amateur contest will have two stops in 2017! we're pumped to help make these events happen! info below ・・・ Stop 1 (of 2) of #ChaseBornAndRaised will be in San Diego, CA. Home of @chadkerley and @dennisenarson, I'm excited to add a westcoast stop to the event. Winner gets an all expenses paid trip to the Austin stop in October. Thanks to @empirebmx for being the presenting sponsor for the 3rd year in a row! ❤️ More info coming soon. ?? (link in bio for info & sign up) – Chase Hawk

Empire BMX coming through with some goodness to enjoy on this Friday Afternoon. Here’s a look at what went down at the second PuckPuckPuck Fest in Austin, Texas. The concept was simple… Have Ryan Corigan and a bunch of others built up some ramps with pallets, bring in a few bands and have a good time! This video shows the build process followed up by the riding and good times that were had! Looks like it was a success to us.

“PuckPuckPuckFest 2.0 went off recently, and was multiple pallet-loads of awesome! huge thanks to Puck, Jack Hartje, and Mabry! big ups to Fine Southern Gentlemen for the venue, and thanks to anyone and everyone who lent a hand
@pucksnotdead
@hackjartje
@a.e.mabry
@fsgprints