If you’re looking for a new full-length flatland video to enjoy, you’re in luck because the new “Unscripted” video by Stewart Munro is out now. Here’s a 7 minute trailer giving you a sample of what the video has in store for you. The full video runs just over 60 minutes and can be bought for $14.95 through the Gumroad website. With a stacked line up and Steward behind the producing side of things, we’re sure it’s well worth the download!

With most of us under some sort of quarantine or just dealing with shutdowns caused by the Coronavirus, the sessions have slowed down a bit and there have been fewer new BMX videos popping up than usual. Matthias Dandois got bored and decided to get outside and practice a little social distancing with a solo flatland session. Here’s a look at what went down in this video that Flat Matters uploaded for everyone to enjoy!

“Breaking the weekly upload FM exclusive cycle, in order to keep you entertained during the Coronavirus pandemic. Many of us are already facing total lockdown, and if not, you are about to….
Matthais Dandois got in contact with a fresh new clip, switching back and forth front to back wheel like a mad man for episode 9 of the Flatmattersonline exclusives after being in quarantine himself for a few days.
I’m still taking in Kio Hayakawa’s amazing line, and Matthias throws down this belter for us all. Thanks Matthias, stay safe out there everyone. And let’s use flatland to help us through this difficult time, these clips are going off!!”

Simon O’Brien and Stewart Munro have been working on the new full-length Landscapes 3 “Judgement Day” video, and it looks like it’s getting close to wrapping up. Here’s just over 7 minutes of footage giving you a taste of what’s to come in the near future with some classic Arnold Schwarzenegger clips mixed throughout. We would imagine this is going to kick a lot of ass, especially if you’re a fan of flatland, so hit play and take a look!

Here’s a fresh one Effraim Catlow from Flat Matters sent through for you guys looking for an interesting interview! Effraim caught up with Pete Brant for a conversation that went over an hour to talk about riding, some of his interests outside of riding and much, much more! If you’re a fan of Podcasts, this is well worth checking out!

“It’s all about the Pete Brandt interview today.
In my opinion, You couldn’t really script this story.. Who would have thought my childhood hero would organise a go fund me fundraiser to get me out to San Francisco and the One Love Jam.

How many would do this or even think about doing this for another rider? It is and was an amazing gesture. So much so I pinched myself at various points of the long flight over to SF. Is this really happening??

As Pete broke the news, aside from my initial disbelief, and thoughts of finally riding the clocktower and going to the One Love Jam. This was finally my chance after ten years of running Flatmattersonline to interview Pete and ask him all the things I was curious about over the years.

I first travelled to SF when I was seven years old with parents, then again at 14 years old and to compete for the X Games in 99, and 2000. The city definitely strikes a chord with me, it is my favourite place to travel in the world. So much history here, the bridges, all the different cultures, the views each way you look, the people, you can ride around Embarcadero and see all the famous skate spots just a throws away from the legendary Clocktower spot that Pete rides everyday, making the 40 minute BART commute from across the bay in Fremont.

I have met Pete numerous times over the years at contests across the globe and even at the San Francisco X games twice which we discuss in the interview.
I haven’t however, hung out with Pete for any considerable amount of time, until this dream trip. I think it’s fair to say we got along so well I now consider Pete a close friend and we share a lot of the same music tastes, views on flatland, we both vibe off skateboarding, and best of all just a lot of laughs and good flatland sessions.
As I approach my 45th birthday in March, seeing Pete still going as hard as ever was a massive motivation to me “hey you can still do this and work a full time job and juggle family life with kids” and be an absolute monster.

There are multiple layers to Pete’s life, which we cover in this interview. The term “legend” gets over used a lot, but Pete really is a flatland legend. And in fact as I now call it he is an “architect”. Pete has helped shape the spot/artform we all love, have you ever shove-it’ed mid trick, done a crackpacker, held a hitchhiker on the peg instead of tyre, used plastic pedals, use a freecoaster, these are all things Pete invented and made them popular and the list goes on.
The man deserves a BIG interview so much I can’t even stress this enough. Our sport/artform needs to respect the architects that shaped what we love today, and Pete is still going hard and in fact I can almost guaranteed he’s the last to read this and will be out shredding at the clocktower without a care in the world other than riding his bike and doing what he loves on the daily.

Over the years, I have met just about everyone in the flatland scene and Pete is the realist rider I have met. This guy eats, sleeps, and breathes flatland, and he totally gets it.

Grab a cuppa, and make some time to learn about one of the best riders to ever do it. Ladies and gentlemen, let’s do this, the Flatmattersonline Pete Brandt Interview! This is for all the hardcore riders out there.” – Effraim Catlow

Here’s one to kick your Friday off with! Effraim over at Flat Matters dropped a new interview with Chad Johnston! The interview covers everything from how he got started with BMX to different sponsors, running the Intrikat team and product things at S&M, filming videos, switching to riding pegless and more! It’s a great read, especially if you’re a flatland fan or one of the “older” guys in the crowd. You can check out the interview over on the Flat Matters website now!

If you’re looking for some dialed flatland riding, then you have found the right place! Flat Matters have just released the full “Landscapes 2” video online! This video was produced by Stewart Munro and features riding for some of the best from around the world. This video is just over 50 minutes long and is jam packed with amazing riding, lifestyle shots and more. This is a damn good watch, so make sure you hit play and enjoy!

Effraim at Flat Matters caught up with Jean William Prevost for an interview!

Here’s a rad one Effraim over at Flat Matters sent over for you guys to check out. Here’s a podcast interview where he sat down with Jean William Prevost to talk about a ton of ground from riding in Canada, hitting up contests all around the world, sponsors, his thoughts on contests and the future of flatland and much, much more. If you have an hour to spare and you’re interested in flatland, this is well worth a watch. Check it!

“Here in the UK, we have this saying “Every Dog has his day”, well…Jean William Prevost had a whole year and deservedly won a lot of contests, awards (Nora Cup, FM) but his achievements go beyond that with his work for inside the flatland industry with Far East and IGI. This year at Bike Days I caught up with the man to talk about how his year unfolded, we discuss everything from winter training, winning contests, motivation, helping bring on other riders, video parts, Flatland in the Olympics and while lot. Years of hard work to get to this level. You definitely want to grab a cuppa or whatever you do. Get the headphones and enjoy this podcast!

1:54: What does the Toronto contest in March mean to Dub?

4:11: Friendly rivalry with Dominik Nekolny, being motivated after getting second?

8:10: Having responsibility as a pro rider and bringing on otter riders such as Joris Bretagnolles?

10:19: After winning Fise Montpelier, then going to Ninja spin and winning. Prepartion right before the contest, contest rituals before runs.

12:28: No one riding like Dub, where did your inspiration come from?

13:54 From one of the best runs of the year at Ninja spin, to dropping another contender for run of the year at BMX Cologne. How do you focus for finals after pulling such an amazing run in qualifying?

15:05: Do you have a set amount of turbines you do in a contest in your lines cause it seems like you could do however many you want?

15:56: Variety in a contest is not only a front and back wheel thing?

16:22: If you could talk directly to a judge, and you had three most important factors to consider in making a result what would they be?

18:17: Practising on perfect looking marble floors then going to wooden floors, how does that translate for you?

20:17: Which point in the year did you think I can win the overall FiseWorld championship title?

22:33: How much of contest riding is preparation and how much is mindset?

26:34: The energy you out into runs seems higher than everyone else out there, how long did it take for you to get to the point where your throwing down flawless runs?

28:48: Winning Flatark, pulling out a new forklift variation to take the win?

36:56: Granite marble at contests as a standard?

41:10: How much training goes into contest riding on a regular day?

47:28: Representing Canada, so many flatland greats coming from your country?

It’s always interesting seeing how people take ideas and create it. Jimmy Biondi wanted to see if he could get hydraulic brakes on his bike… 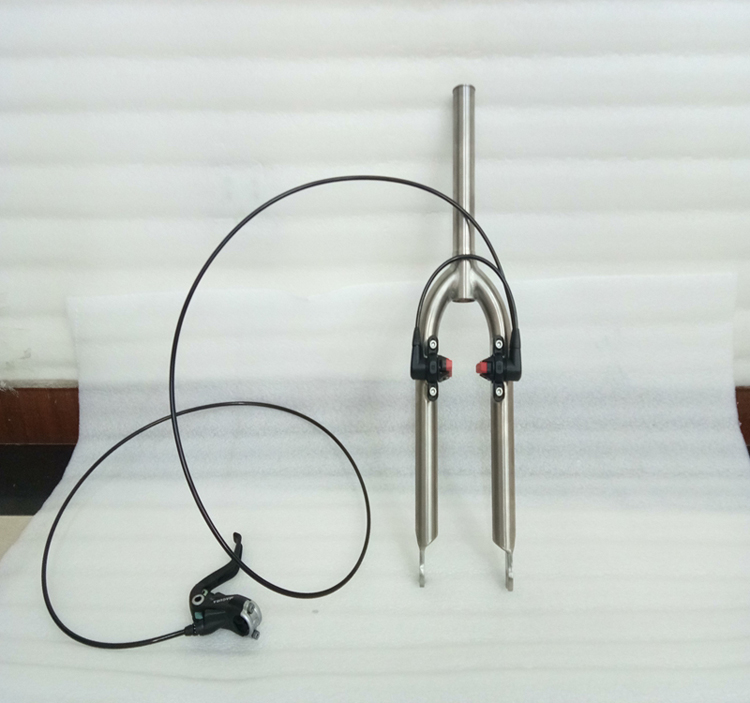 We know… We know… Everyone rides brakeless these days. Actually, not everyone! There’s still a good number of riders out there that run brakes and love them. Over the years, BMX brakes haven’t changed a whole lot, though. We’ve seen the same style of U-Brakes, V-Brakes and even a brief run in with disc brakes that lasted about two minutes over the years, but we haven’t seen much when it comes to hydraulic brake systems. Jimmy Biondi decided he wanted to try it out to, so he spent a year and about $600 to figure out how to get a set of Magura Rim Brakes to work on a custom Titanium fork with mounts. The process was a little more complicated than expected, but in the end he ended up with a crazy brake setup that he likes a lot and could be easier to maintain than traditional BMX brakes with springs. You can learn all about how he did it over on Flat Matters where he talks about the motive, the process, hurdles that he had to jump and more. It sounds like he’s already starting to play around with figuring out how to get hydraulic rear brakes using a hydraulic rotor that would all the bars and bike to spin without cutting off the flow of oil. If you’re a design, product, BMX nerd… This is definitely worth a peek!

Anyone else ever played with hydraulic brakes on a BMX bike or have seen anyone else do it? What are your thoughts on this? Let us know in the comments below!