Dravin Groove coming through with a new one for Hoffman Bikes filled with a bunch of footage from the sessions he’s been getting in out in the streets. Big grinds, drops, wallrides and more! Check it!

“Hoffman’s Dravin Groove (son of Davin ‘Psycho’ Hallford) was working on this new video and then unfortunately broke his leg cutting filming short, but he’ll be back at it in no time. Sit back, enjoy his new video for Hoffman and then go send him some birthday wishes! Happy birthday Dravin!” – DIG

When Mat Hoffman hooks you up with a frame, you know you’re doing something right. Here’s a short but sweet video where Tazz Hernandez builds up his new Condor frame that Mat hooked him up with. Hit play for a look at the bike being built up, then a few clips from his local park where he gave the bike a proper break in.

Filmed and edited by Jonathan Zizzo

Hoffman Bikes are celebrating their 30th anniversary this year, and they’re starting to show off some special edition releases that they have in the works! Here’s a look at the Taj Mihelich signature TAJ Frame Re-Issue that will be available in October! Check out the details below!

END_OF_DOCUMENT_TOKEN_TO_BE_REPLACED

A few weeks back we got a look at the new Hoffman Bikes Big Daddy 2019 Reissue frame, and a bunch of older riders were pumped to see it. Now, we get a look at the frame in action since Art Thomason was able to get his hands on a prototype to try out! Here’s a video he put together giving you a look at the frame built up, along with a bunch of dialed clips from his backyard flatland sessions!

“Mat let me try out the Big Daddy prototype and I am really impressed with how the bike rides. They did a great job capturing the old school look, but making sure it rides like a 2019 frame. Check out this edit to see how it rides!” – Art Thomason 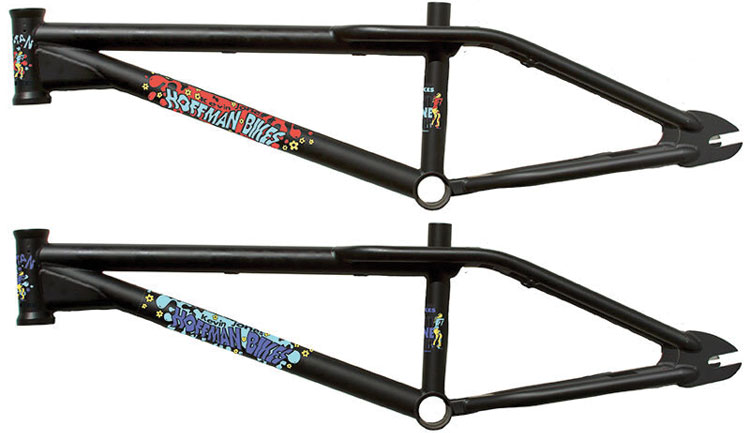 The Hoffman Bikes Big Daddy frame is coming back! Last year during the X Games, a group of us were hanging out and Mat Hoffman talked about his plans with Hoffman Bikes now that he has full control of the brand once again. One of the things he mentioned was that he planned to do some reissues of some of the classic Hoffman Bikes products! Today we spotted the Big Daddy Frame over on the Hell On Wheels Instagram to announce that they’re taking pre-orders for the frame, and we would imagine plenty of other shops will be doing the same here soon.

The Big Daddy frame is made from full 4130 chromoly tubing with a 75-degree head tube angle, 70-degree seat tube angle, 11.8″ bottom bracket height, 8″ standover height and a 13.4″ – 14.2″ chainstay length. The frame features an integrated headtube, a big gusset on the down tube, the classic seat stays that wrap around to the top tube, a Mid bottom bracket, CNC machined and heat-treated 14mm dropouts and removable brake mounts. The Big Daddy frame will be available in 19.5″ and 20.5″ top tube lengths with colors of Black, Raw and Chrome with two sticker kits.

This frame was originally designed by Kevin Jones back in 1993 and it revolutionized flatland frames. Now, in 2019 Kevin has has say in this frame as well as doing all the testing. That’s beyond awesome to see! Here’s a few words about that from the Hell On Wheels website…

“For a little history lesson the original Big Daddy frame was legendary flatlander Kevin Jones’s signature frame and Kevin has been heavily involved with the reissue, see below for a pic of Kevin testing one of the prototypes. Kevin Jones is credited as the innovator of modern day flatland riding. His exploits have been well documented in the ‘Dorkin’ In York’ video series, and his influence on flatland is worldwide. He was the first flatland rider to be added onto the Hoffman Bikes team at its inception. In 1993, Jones designed the signature Big Daddy frame for Hoffman Bikes. The frame revolutionised modern flatland, and is still a sought after bike many years later.” – Hell On Wheels