A little while back, Flybikes‘ Devon Smillie and Larry Edgar spent some time over in the U.K bouncing around to shops. While they were there they spent a bunch of time exploring spots! As you can imagine, these two had no problem stacking some amazing clips! Check out what went down!

“We had the pleasure of joining Fly Bikes’ Devon Smillie and Larry Edgar a few months back on a week long trip through the UK, hitting up some shops along the way. In between those stops we got some time to ride in the Big Smoke as well as a day in Bristol and those two unleashed their full arsenal. As you’d expect with Devon he did some crazy shit and put his spot usage bar to full while we got to see Larry show us he ain’t just a transition god. Don’t worry though, we took him to Dean Lane park for a NASA launch. Supreme camera work from Tonash and Spooky Black handles the noises. If you’re anything like us you’ll be watching this over and over. Look out for an episode of ‘In The Cut’ next week to find out what’s it’s like to be around the caffeine fuelled mind of Larry Edgar for a week!” – DIG

“Another trip, a new country, foreign surfaces beneath your wheels, that feeling of discovery, it’s the never ending pursuit we crave as BMXer’s. So, when Larry and Devon headed across the pond for a Flybikes retail tour, it was another amazing opportunity to get away and hit new spots, capture what England had to offer and bring it to you. Filmed in multiple cities, it was the final “Destination London”, England’s spot-gem capital that captured the guy’s imagination and was always the final goal. 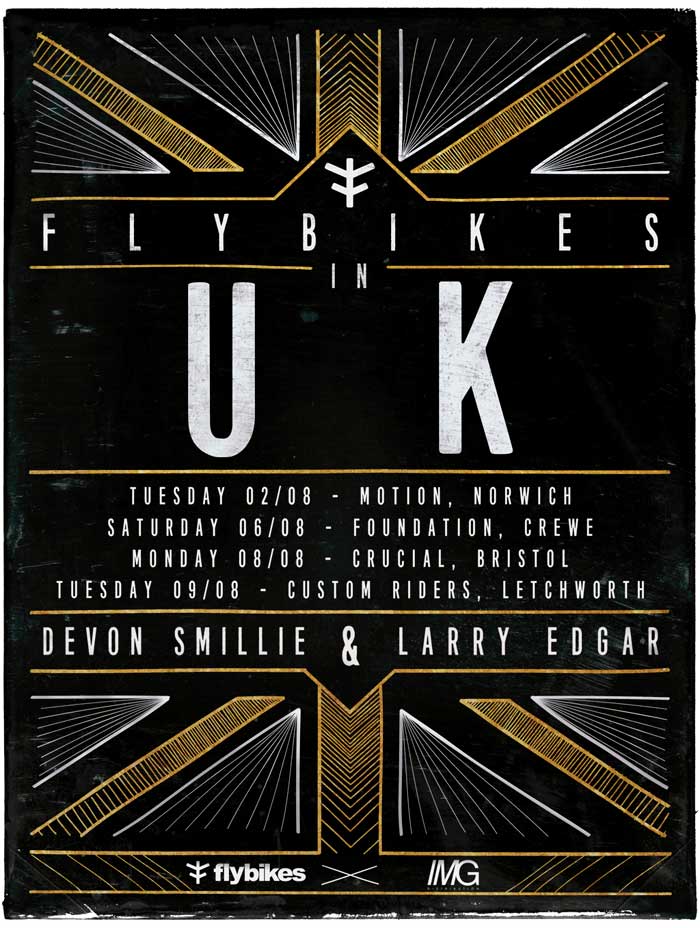 It looks like Flybikes will be sending Devon Smillie and Larry Edgar to a couple shops over in the U.K starting August 2nd! If you’re in the Norwich, Crewe, Bristol and Letchworth areas… Check out the details below!

“If you’re in the UK, get ready! Larry Edgar and Devon Smillie will be visiting a few shops over the course of a few days starting on August 2nd through August 9th! Here’s where they will be!

Big thank you to our distributor in the UK, IMG Distribution, for helping to make this possible!
We hope to see you there!”
END_OF_DOCUMENT_TOKEN_TO_BE_REPLACED

The actual title of this one if “Bicycle Motocross With An Old Camera And A Scratched Fisheye”. It’s a pretty long title, but it’s accurate. Hit play to check out a bunch of real solid clips Chase De Mataro stacked at skateparks and street spots around London! This has a less than serious vibe, but it’s one of those videos that will keep you interested from start to finish.

“Chase De Mataro moved to London last year and he’s been since riding everything our capital has to offer since. Chase is in BMX for the good times. Here’s a few clips he’s picked up along the way to remind him of them. Go Gitano!
Filmed and edit by Dani Madrid for Bloodline BMX.” – IMG Distribution
END_OF_DOCUMENT_TOKEN_TO_BE_REPLACED

Here’s a fresh new one from IMG Distribution featuring Olly Rendle putting in some heavy work for Odyssey and Foundation BMX over in the U.K! This has plenty of gold to take in, so hit play and enjoy!

“Odyssey and IMG Distribution are teaming up with the UK’s best BMX stores to help bring through the next wave of riders. Foundation BMX’s Olly Rendle is next in line with concrete evidence of what can be achieved in one weekend! Filmed and Edited by Mike Higgo at KG in Glasgow.
We look forward to seeing to seeing who’s next to put their mark on the Shop Collaboration Project and to seeing more from Olly.”

END_OF_DOCUMENT_TOKEN_TO_BE_REPLACED

Our friends over at IMG Distribution just hit us with a Mike Curley video Bike Check giving us a closer look at his current Wethepeople setup that is decked out with Odyssey parts! This bike is damn clean and the riding clips in this are damn good, especially those last two clips… Talk about some serious grind balance! Hit that play button and get a closer look at this BMX bike!

Filmed and edited by Tom Pickup

END_OF_DOCUMENT_TOKEN_TO_BE_REPLACED

Jonny Wilson spent a little time filming with Odyssey and Proper Bike Co. connects through IMG Distribution, Raymond Inskipp and Sean Kelly, cruising their local skatepark for a warm up session. Check out this video showing you all the good stuff that went down!

“Spent 30 minutes filming Rax and Sean before we rode street. Quick fire. No fancy equipment. Just a fisheye and a whole lot of stunts.” – Jonny Wilson

Odyssey and IMG Distribution dropped this new video bike check featuring Gary Young. Check out what he’s riding these days! Couple fresh parts and prototypes that are looking real good for sure. That’s a dialed unit without a doubt!

It has been a while since I’ve seen any footage from Tom Davis, so I’m psyched IMG Distribution dropped this fresh new edit. This is damn good.

Filmed And Edited By Clark Thurman