Here’s a fresh one from Jack Acosta who is holding it down for the SBL Crew! Hit play to watch Jack put his pegs to good use out on the west coast. Solid spots and riding in this one. Check it!
END_OF_DOCUMENT_TOKEN_TO_BE_REPLACED

The Grim Crew dropped this new Jack Acosta video online for your viewing pleasure. As we’ve come to know from Jack’s videos, he’s always putting in some heavy work on the streets and this is a good reminder of that. Awesome riding and dialed spots. Can’t ask for much more than that.

Kink have uploaded the second mix section from their “Intervention” BMX video for your viewing pleasure! This section features Albert Mercado, Calvin Kosovich, Jack Acosta and Aaron Smith putting in work in San Diego, Costa Rica, Australia, New Hampshire and Boston, Massachusetts and you better believe these guys crushed it. Hit play and take it all in! After you watch this section, you can watch the full video by hitting this link → Kink “Intervention” – Full Video

END_OF_DOCUMENT_TOKEN_TO_BE_REPLACED

The Kink Bike Co. team recently spent some time out in California bouncing around to different BMX shops and hitting street spots and skateparks along the way! Ride BMX released this video from the trip giving us a look in what Sean Sexton, Connor Lodes, Albert Mercado, Chris Doyle, Travis Hughes, Jacob Cable, Calvin Kosovich, Jack Acosta, Darryl Tocco, and more threw down along the way! This is 10 minutes of BMX goodness, so hit play, kick back and enjoy!

END_OF_DOCUMENT_TOKEN_TO_BE_REPLACED

Vital BMX caught up with Kink Bike Co.‘s very own Jake Petruchik to film with him on his local street spots, and Kink’s base of operations, in Rochester, New York! Watch as Jake, and even a little Jack Acosta crush spot after spot with more grinds than you even know what to do with!

“Kink introduced us to Jake a couple of years ago and he’s been progressing like a madman ever since. Video guru Doeby Huynh recently trekked out to Rochester, New York to film the animal on home turf and this end result is a thing of beauty. Watch and rejoice.
Credit: Doeby”

END_OF_DOCUMENT_TOKEN_TO_BE_REPLACED

Here’s a fresh one from Blunted Athletics featuring Jack Acosta having a productive day out on the streets of Long Beach, California! Plenty of dialed lines and spots in this one!

Filmed and edited by Alex Romero

END_OF_DOCUMENT_TOKEN_TO_BE_REPLACED 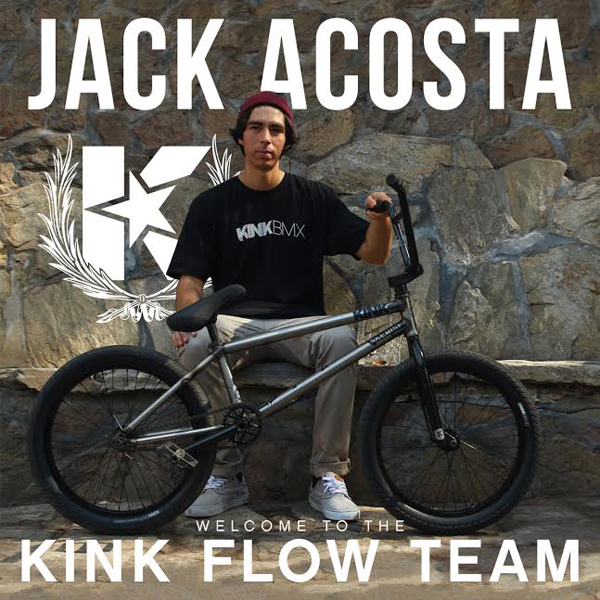 Kink have not one, but THREE new additions to their Flow team! They have added Jake Acosta, Josh Pascasio and Tanner Jensen all to their line up, which should mean good things to come since we’ve seen all three of these guys throw down in the past! I’d imagine we’ll be seeing some fresh footage surfacing soon enough as well!