The final video from “The Ramp” series has arrived and Alex Donnachie and Kevin Kalkoff put it to work!

It’s been a while since Monster Energy has released a “The Ramp” video, so we were pretty surprised to see this video being released. We’re not quite sure why the video has been sitting for over a year, but that’s okay since Alex Donnachie and Kevin Kalkoff absolute CRUSHED IT! Get on that play button and enjoy this!

““The Ramp” finale…finally. Shot in the middle of 2016, various obstacles and periods of nothingness have let this video sleep dormant for far too long. But, I think it shows how timeless The Ramp can be, as the riding from Kevin and Alex still stand up to the level of riding today. I know it’s only been a year and a half, but progression happens fast these days.

Sit back, relax, and watch as Monster’s Alex Donnachie and Kevin Kalkoff put the final touches to this project.” – Monster Energy

Now this is what we’re talking about! Monster Energy just released Kevin Kalkoff‘s new ESTHÉTIQUE where he teamed up with filmer Rich Forne to bring his speed and style to some unique spots! This video requires no music and is nothing short of a Must See! Enjoy!

“Sometimes, BMX is more about the set up/spot and how you ride it rather than the amount of tricks that get done. Monster Energy BMX rider Kevin Kalkoff lives by that rule and brings you ‘ESTHÉTIQUE’ as a perfect example that’s its not what you do but how you do it.

Sit back and enjoy raw and real BMX riding from one of the most stylish in the game.”

Filmed and edited by Rich Forne

As you probably have heard by now, the second round of the Vans BMX Pro Cup is going down in Malaga, Spain this weekend at Ruben Alcantara‘s skatepark. There are a whole bunch of Pro’s who have been making their way to Malaga a few days early to get some practice in. Greg Illingworth is one of those guys! Here’s a short but sweet, raw, GoPro POV video he put together from a hot lap he got in with Kevin Kalkoff. If you haven’t had the chance to ride this skatepark yet, this video will give you a good idea of what it’s like to ride the bowl and will probably leave you wishing you were there to ride it! Take a peek!

“I followed Kevin Kalkoff around the Ruben Alcantara skatepark in Malaga.”

The Shadow Conspiracy and Subrosa World Tour continues. This time around we get a look at what the guys got into during their trip to France this past summer. Hit play to check out a ton of excellent footage from skatepark and street sessions, shop visits and more! Looks like it was another real good time. We’re pumped on the amount of Ryan Sher footage in this!

“The Shadow and Subrosa World Tour keeps on trucking as the team moves to the beautiful French countryside visiting Basel, Nancy, and Strasbourg.

A huge thank you goes out to Trendsport Basel, Stride Indoor Park, all the Nancy locals, and especially Sparkys France for inviting us in to your incredible country and shredding with the team. We hope to see you all again very soon! 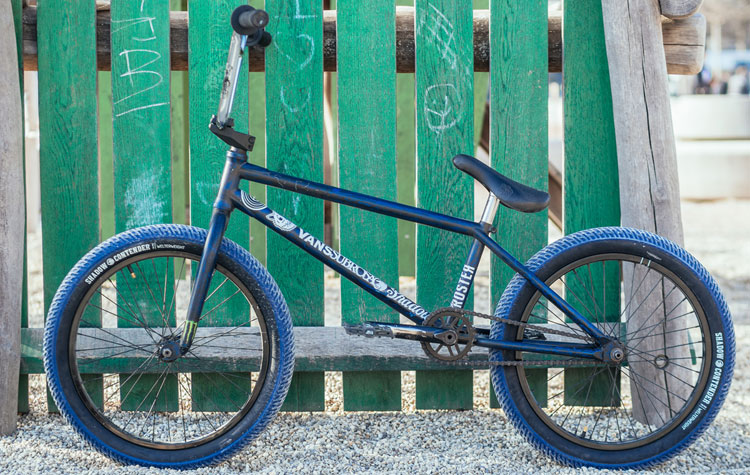 This is a pretty cool concept. DIG and Soul teamed up for a unique trip they sent Kevin Kalkoff and Thomas Benedetti on. Neither ride knew where they were going, but found out they were on the way to Croatia once they got to the airport. Here’s a video giving you a look at what both of these guys stacked for clips during their visit! Although they had no time to plan and possibly scope out some spots early, they didn’t appear to have any trouble coming across spots!

“We’re always proud to support likeminded BMX media people out there so we’re more than happy to announce long time Gallic print bothers Soul as our official DIG media partner for France. Check out our first collaborative release with them below and be sure to go and check out their all new online direction at http://soulbmxmag.com

There’ll be lots of DIG X SOUL projects to come but meantime check out what their editor Ben Bello had to say about the first ever Soul Blind Trip in conjunction with Monster Energy.

“It’s one of those idea that makes you smile when you come up with it, but also one of those idea that complicates your life because you will never give up on making it a reality. The idea was simple and challenging: take a rider on a trip to a city never knowingly visited by Pro riders, and announce the destination when we bring the rider to the airport; just for the pleasure of seeing his face when he learns the news. We chose France’s Kevin Kalkoff (Vans) for this first episode, told him he was going on trip, and gave him nothing more than the date. To add some brotherhood we also invited his brother Thomas Benedetti (Haro/eclat)​to surprise him by joining the tour. Both discovered their destination to be SPLIT, in Croatia, a beautiful city on the Adriatic coast with many spots in the surroundings.” – Ben Bello / http://soulbmxmag.com/

Filmed and edited by Antoine Sabourin”

Now THIS is what we call a GOOD TIME. The official video from this years Money For Trick contest at the Skatepark of Malaga in Spain gives you a look at all the action and good times that went down throughout the day and the madness at the after party! Amazing vibes, excellent riding, dialed film work. You have to give this one a watch! Shout out to Fernando Marmolejo for making this happen!

Also, check out the Money For Trick 2016 Photogallery!

“With 200 registered from all corners of the country and other parts of Europe like UK, grece, Germany or France, “Rubén Alcántara” Skatepark climbed their slat once more… With one of the best bowls of the world, the level in this discipline was unbeatable, people as “Juanillo” from Chile destroyed them minds doing a whip in a 7 mts transfer ,winning 200€ as Best Trick. The “follow me” of Sergio Layos, Kevin Kalkoff and Greg Illingworth left certainly speechless to the public with its incredible airs. After a very cold Monster began the new of this year, the M.O.R.(Money Obstacles race) the truth is that had great acceptance from the riders and that achieved its goal… Disconnecting a little tricks and having fun!! Cristian Toledo made the best time with 11, 37seconds taking 100€!
Then at dirt continued stressing the flow with Miguel Cuesta to the head, as a result took their € 200 for Best Style, some spectacular tricks as 360 Seatgrab Indian’s “juanillo” also did we skip surprised. The Street was savage, many riders wanting to give it all, so we had to make 4 groups to ride well… Courage Adams or Jason Eustathiou certainly is carried several 5€ thanks to its softness and flow. The Canary Javi Castilla won other €200 with the best creativity with a oppo tooth to crank 360… The public was happier than ever with the amount of awards which are pulled from the Truck… over €1000 in stuff like Vans Shoes a United frames/ bars, Oakley Sunglasses or polaroid cameras just by upload a photo on Instagram… And the after party… to say that there are still people’s Party, says it is all!
One more year whith the REAL bmx atmosphere… The event never would have been possible without the unconditional support of Monster Energy and the collaboration of UnitedBMX, Vans, Oakley, BMXUnion and Wallride Mag.