Yesterday were the Vans BMX Pro Cup Huntington Beach Qualifiers to figure out the top 20 riders that’ll be throwing down on Sunday. With a ton of amazing riders from all over the world dropping in, there was no shortage of amazing riding to take in. Below you can find three videos giving you a look at what went down. The first two from Vans and Vital BMX are shorter highlight reels, and the third is a longer raw cut with more footage from Ride BMX. Check out what went down and the full list of riders that qualified for the final!

“Forty of the top BMX riders in the world put it all on the line in hopes to make it through to the finals of the Vans BMX Pro Cup World Championship. Dennis Enarson came out on top with huge lines throughout the skatepark setting the tone for the finals – big lines score big points. Top five riders: 1). Dennis Enarson, 2). Kevin Peraza, 3). Kris Fox, 4). Gary Young, 5). Larry Edgar. 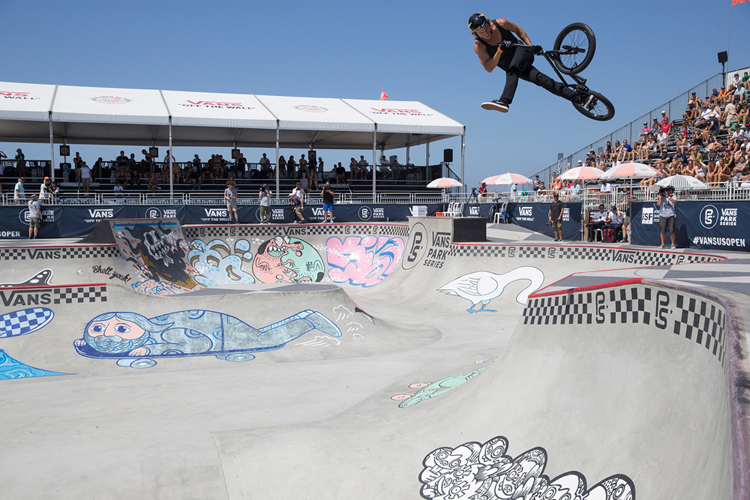 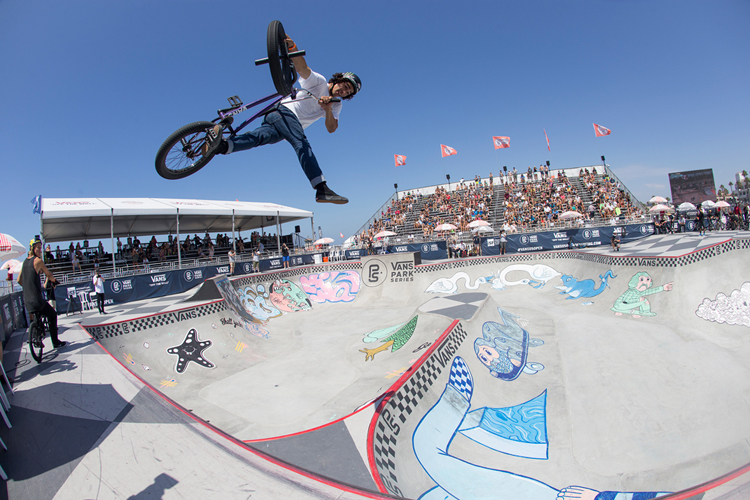 In partnership with the largest action sports event in the world, the Vans BMX Pro Cup World Championships is held during the prestigious Vans US Open of Surfing, bringing an exciting show of BMX park terrain competition. For detailed information on competition format, athletes, sanctioning, tour highlights, photos, videos and to watch the first-ever Vans BMX Pro Cup World Championships on the live webcast, visit www.vansbmxprocup.com.“

The other week Kris Fox popped up in a Brisk commercial, but it looks like that wasn’t all he was working on with them! Here’s a rad Bio video where Kris talks a little bit about how BMX became apart of his life, injuries and how it has has turned into so much more. This also has some behind the scenes footage from the commercial that is pretty interesting to see as well. Take a look!

“Pushing yourself and your craft to make your mark on the world, that’s hustle, That’s Brisk.

Find out what pushes Pro BMXer, Kris Fox, to such epic heights in Episode 1 of our Respect The Hustle series.”

Dan Foley coming through with a new video giving you a look at what he got into during his trip to Malaga, Spain for the Vans BMX Pro Cup last week. This doesn’t have much from the contest, but it does give us a look at what Dan, Corey Walsh, Dakota Roche, Larry Edgar, Kris Fox and Matt Cordova got into while exploring the city! Take a peek!

“A couple days of cruising around Málaga, Spain before the second stop of the Vans BMX Pro Cup. This city is amazing.”

The pros are rolling into Malaga, Spain for the 2nd round of the 2017 Vans BMX Pro Cup! With some of the best riders in the world planning to drop in on Ruben Alcantara‘s bowl, things are bound to get crazy. Here’s a look at ton of the action that went down during the first day of practice between 4 different videos! It’s safe to say the guys aren’t having any trouble BLASTING and there will be no shortage of footage from this one! Take a look!

“Making Life Out of Music” by Eye Q, Album: Power to the People”

“The first official day of practice has wrapped up at the Vans BMX Pro Cup in Malaga, Spain and the riders are dialing in the epic concrete park. Check out a few highlights for a taste of what’s to come. Riders include Larry Edgar, Sergio Layos, Tom Dugan, Dennis Enarson, Kris Fox, and more.
Credit: Vital BMX”

We have seen BMX pop up in countless commercials over the years, and it looks like you might just see another one on your TV here soon once again. Here’s a look at a new commercial for Brisk that has a quick look at Kris Fo getting it done. The post production makes it look pretty wild, but yeah. Take a peek!

“Check out b-boying from RJ Puno, BMX tricks from Kris Fox, streetball moves from Mosquito, light paintings from Darren Pearson, streetwear styling by Rob Garcia, and OpTic gamer Hector Rodriguez as they push what’s possible and define what it means to make something “That’s Brisk.””

During the Vans BMX Pro Cup the other week in Sydney, Australia, some of the guys decided to head to Five Dock skatepark for a session in their massive bowl. Dan Foley pulled out the camera to film some of the riding that went down. With a line up of Larry Edgar, Ryan Nyquist, Dylan Lewis, Kris Fox, Jason Watts, Cody Pollard, Chris James, and Corey Walsh, you know things got wild. Check it out!

“Raw footage from one of the craziest sessions I’ve ever witnessed. After one of the practice days at the Vans BMX Pro Cup in Sydney, a heavy crew met up at Five Dock skatepark and absolutely annihilated the bowl. I had to grab the camera for a bit and document it. I guess 10 ft. airs are normal now”

Red Bull coming in HOT with a new Three Day Metro Pass video! This time around Sergio Layos, Dan Foley, Kris Fox and Corey Walsh go to work on a bunch of different skateparks and spots around Vancouver! If this line up doesn’t SCREAM speed and style, than you are clearly out of the loop or off your meds! Hit play and watch these guys absolutely tear the place apart! After you watch the video, you can check out a bunch of rad photos and more from the trip over on the Red Bull website!