Whenever Lee Musselwhite has a new flatland video to check out, you know you’re going to see something wild. Here’s a short but sweet “training montage” filled with combos like his signature Spider Glide! Take a peek!

When you see Lee Musselwhite‘s name pop up with an edit, you know you’re in for some serious flatland magic. Here’s a fresh edit he just released packed with amazing riding from his sessions in 2019. There are so many crazy combos in this one and you’ll definitely want to scroll back a few times to really catch everything he’s doing. Lee makes those body varials up on the front end of the bike look so easy! This is too good to miss!

We’re big fans of Lee Musselwhite, so whenever we see he has a new video we get excited. Here’s a video he put together featuring his best clips he filmed for Instagram and actual edits over the course of the year. As always, Lee cooks up some amazing riding with a few of his original tricks like the Spiderglide in there! Take a peek!

We’re always stoked to see a few fresh clips from Lee Musselwhite. Here’s a video he just uploaded giving us a look at his runs that he laid down during the Wheels & Fins Festival for the UK Flatland Championship. As always, Lee cooks up some incredible riding where he mixes in a few of his own signature tricks like the Spider Glide and more that we still can’t fully comprehend. Take a peek!

We’re always stoked to see what Lee Musselwhite has been working on! Here’s a video he put together of five different combos that he pulled in one try! Talk about being absolutely DIALED. This is a rad video to check out regardless if you’re into flatland or not. The amount of balance, control and precision that goes into this is unreal!

We’re always stoked on some Lee Musselwhite footage. Here’s his latest video we spotted on Flat Matters. This is a one minute long combo mixing in a few of his hardest tricks like the Spider Glide like it’s nothing! Hit play and check it out! 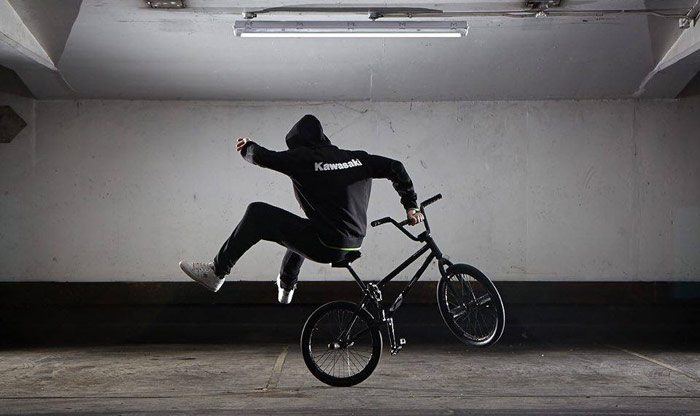 Here’s some interesting news we spotted over on Flat Matters. It would appear that the Spider Glide wizard, Lee Musselwhite, has picked up an interesting new sponsor… Kawasaki Motorcycles. Now, we’re sure this will get some mixed reactions since generally non-BMX sponsors do that, but we’re pretty stoked to see the news. The motorcycle industry, especially the motocross side of things, have a huge fan base and if brands like Kawasaki are looking to put some of those eyes on BMX, we have no problem with that. Stoked to see the news and interested to see what comes from this deal.

What do you think? Let us know!

END_OF_DOCUMENT_TOKEN_TO_BE_REPLACED

We’re always pumped when we find some new Lee Musselwhite footage over on Flat Matters! Here’s a quick clip of Lee pulling off a new move he has cooked up out of his signature Spider Glide that’s called the Black Widow Switch. Lee explains below… So insane!

“Getting back on to the bike out of rolling my signature limbless move the “Spider Glide” is hard enough but getting back on without using my hands straight into another no handed trick has been in my head for a long time.

This might look like a small move but its stupid hard,
I dubbed it the “Black Widow switch”

Filmed and edited by Nick Wotton”