Now this is awesome. Source BMX just announced the LEGENDS team for Battle of Hastings that is being lead by Van Homan for the contest. As you can imagine, Van decided to go with a few classics that you can always count on! Van, Garrett Byrnes, Mike Escamilla and Chris Doyle will be showing the young guns what’s up! Get ready.

The other week Brian Kachinsky had a little bachelor party down in Puerto Rico with Dave Friemuth, Chad DeGroot, Brian Hunt, Mike Escamilla, Andrew Brady, Kevin Porter and Aaron Bostrom, where the crew spent a week riding spots and exploring the island. This video that Dave put together shows what these guys got into on and off their bikes. As you can imagine with a crew like this, there was plenty of dialed riding and good times to be had. We’re pretty sure there has to be plenty of footage that didn’t make it into the edit that was probably hilarious, but… yeah… It’s safe to say these guys had a super good time during their visit. Anyone else reaaaaaally want to go to Puerto Rico right about now?

It’s always a good day when some new Mike Escamilla footage drops online! Here’s his new one for United promoting his signature Caveman Frame with the built-in Bash Guard! Hit play to watch Mike put the frame to good use on street spots, pools, trails and more. Gotta love that mix of front brake magic in there, too! Amazing riding, dialed spots and some clean film work. Massive Bonus points for mixing in the legends Brian Castillo, Keith Treanor, Ian Morris, Ron Kimler, Jason Enns, Andrew Lazaruk and Brian Terada into this one, too! This one made us want to go out and ride so bad. Highly, highly advise you give this a watch!

“After putting out his first section for the infamous Dirty Deeds way back in 1994, Mike ‘Rooftop’ Escamilla has released yet another belter of a part for his new United Caveman bashguard frame, some 20 years later and with multiple video sections in between. That’s a truly incredible feat in itself – how many other Pro riders can say the same? Filmed in 17 days, Mike really put himself through the ringer for this, but damn it was worth it – oh and just look at the list of names in the bonus clips, that’s a hell of a crew of legends and friends to be building your run-ins for you! Here’s what Mike had to say about the filming process:
“We filmed this in 17 actual days over the past 3 months, in all of my years filming and riding I’ve never fought so hard against, weather, spots, schedules and injuries trying to film. I also never thought I would film a section again, so with that this is what we ended up with. It was fun to actually try and film again, so many great spots that most or nobody has ever seen. which finding them with the crew was truly the best part of making this edit. I wanna give a real thanks to Andrew Lazaruk and Brian Terada both who honestly helped so much making spots ridable do to weather or whatever. they did more work than I did. Without them it would not of happened in the small window we had to do it…this is for you boys! Cheers.” – Mike Escamilla
Filmed by Mike Mastroni, Calvin Kosovich, Paul Luna, Dallas Dunn
Music: Dr. Dre, Ice Cube, Guns n Roses” – DIG

2016 has been a year that has been good for breaking the mold when it comes to BMX frames. People were complaining that all BMX frames looked the same / were too similar, and now a few brands have stepped up. The other week we got a look at the Mike Dinello frame from Nowear, now we’re taking a look at the Mike Escamilla signature Caveman frame from United Bike Co.. This frame is what happens when you mix 2016 design with 1980’s innovation. The Caveman frame is made from full 4130 chromoly tubing with at 75-degree head tube angle, 69-degree seat tube angle, 11.8″ bottom bracket height, 8.8″ standover height and a 13.65″ chainstay length (slammed). This frame features an integrated head tube, top and down tube gussets, a down tube that wraps around the bottom bracket with a wishbone, Mid bottom bracket, a wider rear triangle with tapered seat and chain stays to fit 2.40″ tires, removable brake mounts, 5mm thick dropouts and, of course, the removable steel bash guar that attaches to the bottom of the wrap around down tube.

The Caveman frame comes in gloss metallic platinum blue only with your choice of pink or white bash guard, 20.8″ top tube length only, a weight of 6 lbs 1.7 oz. You can pre-order this frame through United Bike Co. dealers worldwide now, but expect the frame to become available around January 3rd next month. 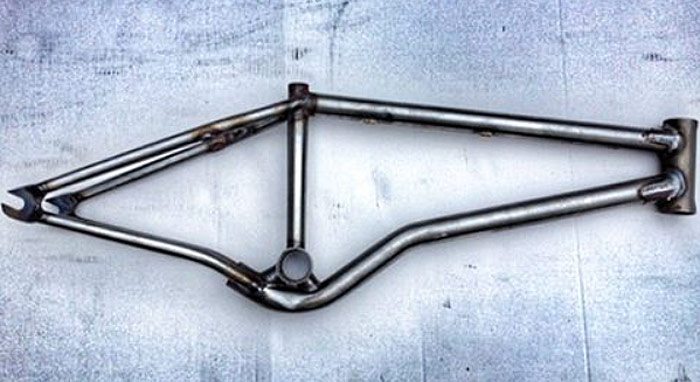 The other day we caught a quick glimpse of this frame and for one reason or another thought it was just a random one off frame somebody had S&M or somebody else make. Then today we noticed a blog Brian Tunney wrote about the frame and we realized this is actually a prototype signature frame that United Bike Co. is working on with Mike Escamilla that will be available sooner than later. We’ve seen the bash guard make appearances multiple times over BMX’s short history, between frames that came with them and some after market ones like the guard Fly Bikes and Ruben Alcantara worked on, to that BMX Grind Bottom Bracket Guard we haven’t heard anything about or seen anyone riding. A lot of older guys talk about how BMX trends tend to go in circles… Things that were popular fade out, then years later come back stronger than before. Maybe this will be the revival of the integrated bash guard? We’ll just have to wait and see how things go when this frame comes out. Expect more details once it’s closer to release! It sounds like there is a nylon bash plate that is attached to the tubing that goes around the bottom bracket, so you’ll be sliding smooth.

“SNEAK PEAK! United and I have been working on a signature frame for the past 8 months. Here’s the prototype frame without the nylon bashplate. Although lately you have been seeing a few one off bashguard bikes this will be full production and available soon. With all the riders running no pegs I can’t wait to see who drops in and delivers original new grinds and ideas! Stayed tuned for more info and pics!” – @MikeEscamilla

END_OF_DOCUMENT_TOKEN_TO_BE_REPLACED

Here’s one we have been excited to see since Pools Gold Part 1 came out last week! Check out some more action from Van Homan, Jason Enns, Garrett Byrnes, Mike Escamilla and Rob Dolecki as they cruise a few more pools and do a little cleaning on one. Such a good BMX video. Watch this, then make sure you watch Pools Gold Part 1!

Van Homan (FIT/Dans Comp), Jason Enns (Volume/Demolition) and Garrett Byrnes (T1), together on a Southern California adventure consisting of hopping fences and surfing some concrete waves? What is this, 2002?

Nope, this actually happened a few months ago early in 2015, though this was the first time all three have been on a trip together since the Criminal Mischief filming-era over a decade ago. And it was on the opposite end of the spectrum as what would normally be defined as a “filming trip.” It was more so essentially a week-long riding vacation (literally for Garrett), and these legends reminisced about old memories, and made some new memories to last a lifetime. Stew Johnson captured this experience for your viewing pleasure; hope you enjoy. Garrett’s MVP award is on the way… ”

END_OF_DOCUMENT_TOKEN_TO_BE_REPLACED

Mike Escamilla is always on the hunt for a good full pipe! Check out this video GoPro dropped from one he came across in a construction zone recently!

“Join Mike Escamilla as he searches for fullpipes to shred and captures the perfect shot to post online with the help of the GoPro App while on the go.

END_OF_DOCUMENT_TOKEN_TO_BE_REPLACED

Part 3 of Jaden Leeming’s “Makin’ It” series takes him to some spots off the map that Mike Escamilla has cooked up for him and then some fishing with Hucker! Take a look!

“Heading to the back hills of California, Jaden Leeming is in the company of Mike “Rooftop” Escamilla, a BMX legend who helped to shape street riding into what it is today. Rooftop, who started riding before Jaden was even born, is keen to show the young New Zealander some of the more unusual riding spots that California has to offer.

This adventure sees Rooftop take Jaden to the infamous Baldy Full Pipe up in Mt. Baldy. A spot that has historical importance to BMXers and skaters alike and a must-visit for any pro.

Later, Jaden meets up with Mike ‘Hucker’ Clark for some relaxation and recuperation with a spot of fishing and snorkelling on Catalina Island.” – Red Bull