We’re still not sure what Brakeless TV is, but we’re digging it. Here’ the full live replay from the King of the 4 Block where Nathan Williams, Brett Silva, Demarcus Paul and Poor Homie Rich throw down for $1,000 cash! The stream is a little choppy at times, but you already know these guys throw down plenty of heavy moves. Check out just over an hour of footage from start to finish with commentary from Dennis Enarson and Mike “Rooftop” Escamilla!

There’s so many crazy hidden DIY spots, it seems like there’s always a new one we haven’t seen that pops up! Our BMX dropped this raw cut from the Desert Skate Ranch where Mike “Rooftop” Escamilla, Gary Young and Jessy Twin got to session the pool and crazy transitions all throughout. This looks like it was a ton of fun to ride. Hit play and take it all in!

“When Rooftop texts you about going to ride a park in the middle of the desert, you jump in yer car and you make that three hour drive. I must confess that I was really hurt during filming this, so the video could have been a lot better…but it is what it is. I was struggling. Shout out to Desert Skate Ranch for letting us come out. Really want to come back out now that I’m healthy.” – Our BMX

United coming through with 4 minutes of footage featuring Mike “Rooftop” Escamilla, Andrew Lazaruk and Seamus McKeon going to work on pools and street spots out in California! You already know these guys delivered with the goods, so hit play and enjoy!

“Curfew In California; the chance to get tires on some unfamiliar terrain in the Californian sunshine. Kick back and enjoy 4 minutes of United’s Seamus Mckeon, Andrew Lazaruk and Mike “Rooftop” Escamilla as they get to action in some Cali pools.

Here’s one we’re really stoked on! Mike “Rooftop” Escamilla coming in hot with a brand new video filled with dialed riding from pools, parks, ditches, street spots and more, along with guest clips from a bunch of friends (and legends!) to celebrate the release of the latest version of his signature Caveman frame from United. You already know this one delivers with a good mix of tricks and plenty of front and back brake magic! Take a look!

“It’s not everyday that you get a Rooftop edit. The prolific video part rider rides spots of all shapes, sizes, and depths, in what he specifically calls an edit (not a video part) to promo his signature Caveman V2 from United. All hail Rooftop!” – Our BMX

Check out the Caveman V2 frame from United! 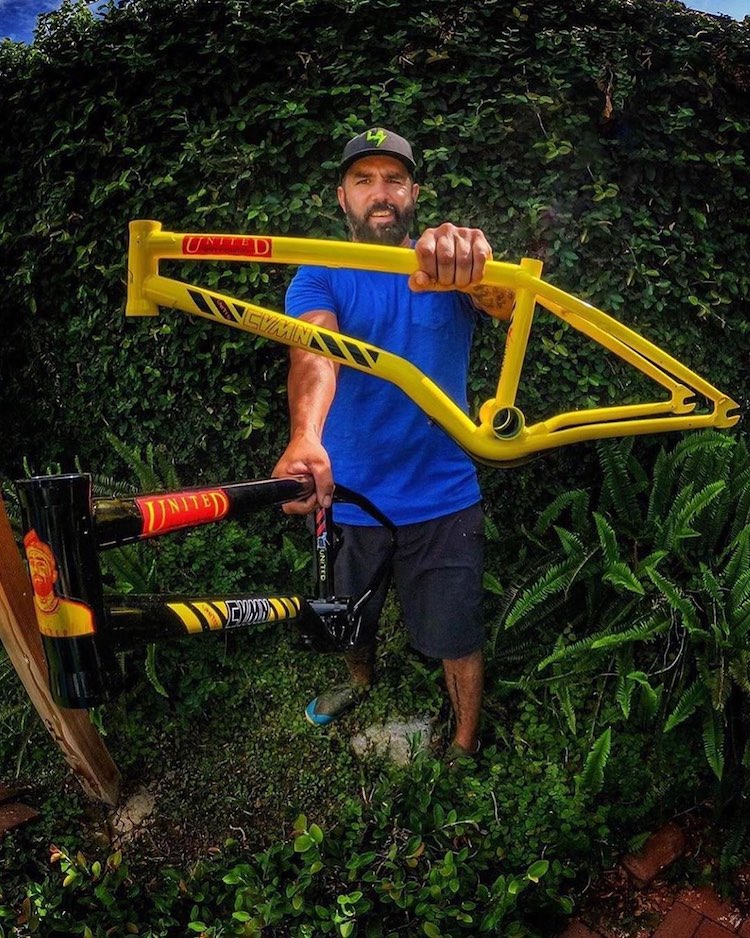 It has been a bit of a dryspell as far as new and interesting products go lately. We haven’t seen anything too exciting as of late (at least that we have been tipped off to) and it’s good to see something pop up for a change! United have announced that Mike Escamilla‘s signature Caveman frame has been brought back by popular demand for a limited Caveman V2 run! Much like the first version, this frame definitely stands out from the norms of 2020 and has a throwback look to a classic Wilkerson Airlines frame from way back, and it looks awesome. Check out the specs, details and more photos below! We will point out that this frame will be available for PRE-ORDER TOMORROW, SEPTEMBER 23rd with delivery coming in November, and a price tag of $581.32. Steep, but the collectors out there will love it. You can pre-order the frame here — United Website.

END_OF_DOCUMENT_TOKEN_TO_BE_REPLACED

Craziest BMX tricks ever done? That’s a wild thing to think about Over the history of BMX, the level of progression has been absolutely mind blowing when you look at how far things have gone and how gnarly the riding has gotten. Over the years, there have been a ton of tricks that have been notable as the craziest tricks. During Mike Escamilla‘s Feeble Talk interview, he talked about on some of the craziest BMX tricks ever done over the years. Obviously this is a pretty condensed list and more of his and Ryan Fudger‘s personal picks that stand out to them. This list could be pretty endless, but this one does span a lot of history from the past to current, and a good reminder of some real gnarly tricks that have gone down!

What are some o the craziest BMX tricks ever done that stand out to you that weren’t mentioned in this video? Let us know in the comments below!

“Been sick most of this week, so I haven’t had time to edit anything fresh, but I wanted to do this anyway…. Rooftop runs through what he thinks are the craziest things ever done on a bike.” – Our BMX

END_OF_DOCUMENT_TOKEN_TO_BE_REPLACED

If you haven’t caught on by now that Mike Escamilla leads a pretty interesting life on the daily, you’re clearly blowing it. Here is an interesting video where you get a chance to see what a random day in Mike’s life is like as he meets up with a few familiar faces to spend a day finding and riding a pool spot out in California. Hit play and check out what he got into along the way!

“Sometime in the Spring of 2016 our intrepid DIG documentary maker Fraser Byrne spent a day out in California with the legendary Mike Escamilla, on a pool hunting mission with Brian Castillo, Jason Enns and Andrew Lazaruk. Filmed shortly before the release of his United ‘Caveman’ bashguard frame we discover what daily life looks like nowadays for Rooftop and hear his thoughts on combining friendships and family with riding – past, present and future.

The crew at Source BMX have uploaded the 8th place video for the Battle of Hastings Plaza Edits. This time around we get a look at what Van Homan and Mike Escamilla threw down during their time on the plaza. Needless to say when you have two legends like Van and Mike riding, you’re going to see something amazing. Check out what went down!

“Van Homan assembled a team of legends for this years BATTLE OF HASTINGS consisting of himself, Mike ‘Rooftop’ Escamilla, Garrett Bynes and Chris doyle.

Check it out now.” – Source BMX