With some of BMX’s best ramp riders in the world in attendance, it was no surprise that the finals of BMX Park for NASS were absolutely nuts this past weekend! Above is a highlight reel from the contest that shows you all of the crazy riding. This is definitely banger after banger after banger.

Curious what went down during the finals of BMX Dirt at NASS this weekend over in the U.K? Here’s a look at a ton of dialed riding that went down, along with a full list of results. Despite a pretty cloudy sky, it looks like the rain held out and these guys were able to throw down all day long. Take it all in already!

This past weekend was NASS>/a> over in the UK and some of BMX’s finest were in attendance to throw down. Above is a look at what went down during the BMX vert finals contest, which features quite a few names we haven’t seen pop up on the vert ramp, so that’s pretty rad to see. Hit play and take it all in!

With some of the best ramp riders in the world lining the decks of the NASS 2016 park course, you know there’s going to be some insane riding to see. Here’s a look at some of the madness that went down during the pro park qualifiers! There’s no denying finals are going to be even crazier.

Curious what went down during pro dirt qualifiers at NASS today over in the U.K? Hit play and check out a short but sweet video with a few clips from the first round. Based off this video, it looks like plenty of dialed riding went down! We’re excited to see what comes out in the finals.

END_OF_DOCUMENT_TOKEN_TO_BE_REPLACED

NASS Festival 2016 is in full force this weekend and there’s plenty of BMX action to take in. Here’s a look at what went down during flatland qualifiers! This video is pretty short, but it’s packed full of some incredible riding. Take a look and see what went down!

It’s always rad seeing the ladies throwing it down on their bikes. Here’s some highlights from the Girls BMX Park contest that went down at NASS the other day. This video is short, but sweet. Plenty to take in and it looks like the girls had a damn good time. Check it!

“NASS FESTIVAL has for a long time been a fixed star on the global BMX contest circuit. But being a prestigious global event was not enough for us. We wanted more and we have got it. This year NASS has been chosen to host the BMX World Championships, as sanctioned by the iBMXff.”
END_OF_DOCUMENT_TOKEN_TO_BE_REPLACED 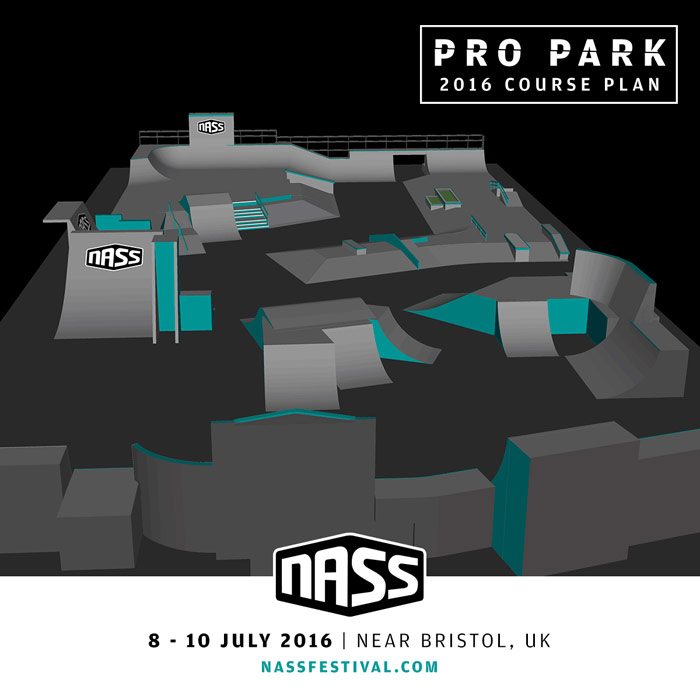 It’s that time of the year again to start getting ready for the annual NASS contest over in the U.K! Today, we get a look at who will be there along with a preview of the park, dirt, flatland, vert and public park that will be getting put to good use all weekend long! Check it out!

NASS has revealed a list of the world’s top BMX riders from around the globe to compete at the IBMXFF World Championships when they return to the UK for the first time in 28 years next month (July). The competitions will feature more than 400 athletes competing for prize money in the BMX disciplines of Park, Dirt, Vert and new for 2016, Flatland. 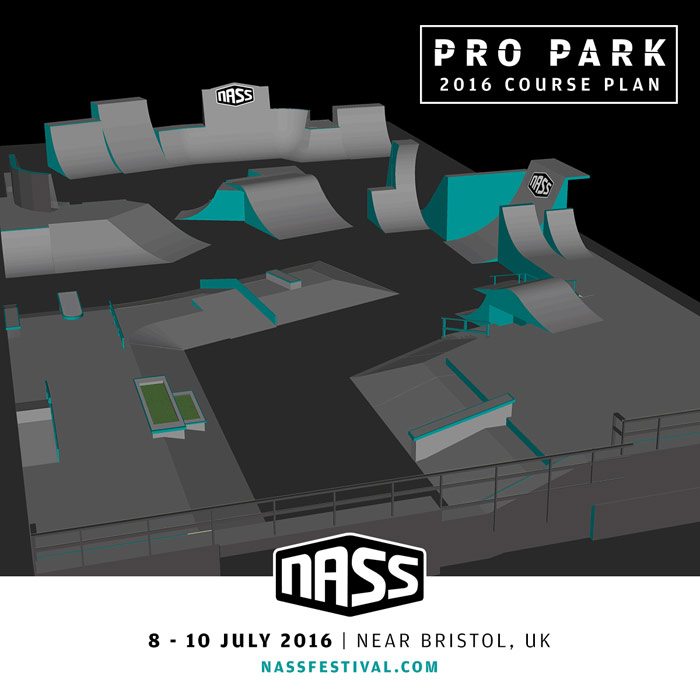 “Pro Park
Designed by the UK’s leading park designers, FourOneFour, the Pro Park is by far the biggest sports stage at NASS with street obstacles, huge transitions and of course, The Elvis – the 12ft high ramp that fires athletes up to the roof. Additionally this year’s park course will include more intricate street sections with smooth lines and some massive new gaps as well as half loop for anyone mad enough to give it a run.

The Pro Park has been designed by the UK’s leading park designers, FourOneFour.” 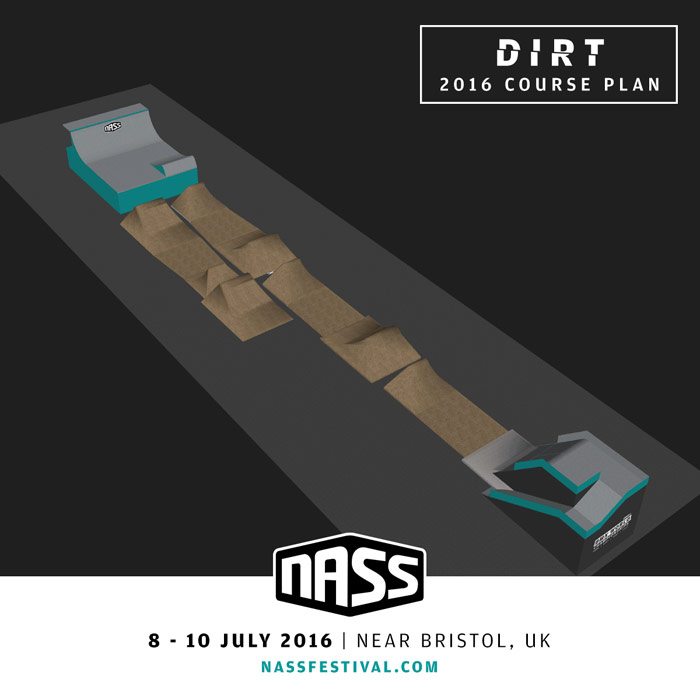 “Dirt
For 2016 and The Worlds, the NASS dirt course has doubled in size. Now with the addition of a gapped step up, riders will have a platform to turn and hit an additional two jumps on a new section of the course. This pro-level course in its entirety will feature no less than five huge jumps designed by Gorilla and built by BMX legend and world champ, Kye Forte.

Due to the sheer size and scale, the course will only be available for pro athletes hosting the IBMXFF World Championships for Dirt and the Dirt Wars Freestyle Mountain Bike competition.” 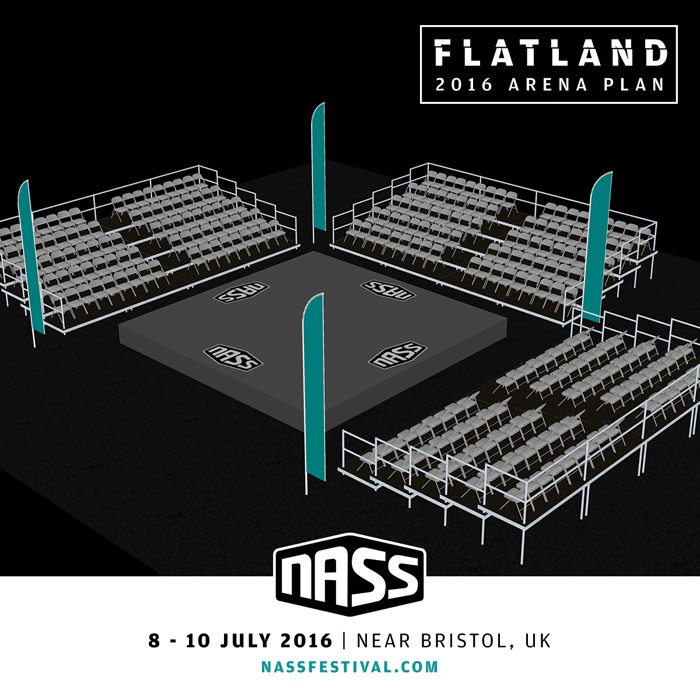 “Flatland
With the introduction of flatland to NASS, a whole new specially commissioned stage has been designed to offer the smooth, flat terrain required for the spins, balance and flow to perform the tricks and stunts that from the heart of freestyle BMX. The Radlands Arena will host the IBMXFF Flatland World Championships Pro and AM and will double up as the B-Boy stage to create a hub of creativity, passion and imagination at the festival.
” 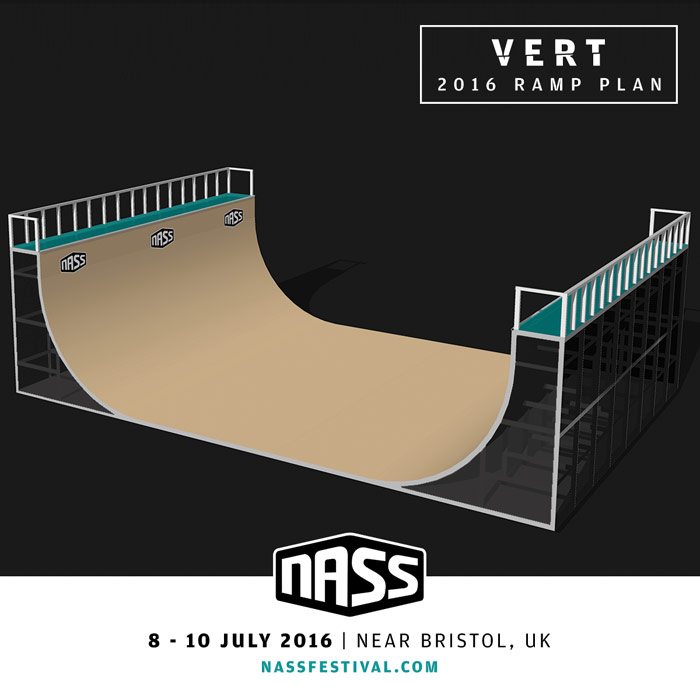 “Vert
2015 saw the return of Vert to NASS and Tony Hawk set the bar so high it was a no brainer to bring this prized asset back for the Worlds. At 14ft high, it is one of the biggest ramps in Europe and will make an epic stage for the world’s leading BMXers and skaters to show off their awe-inspiring skills. Built to Tony Hawk’s specification by Kings Ramps, headed by UK vert legend Pete King it’s renowned as the best demo ramp in Europe.

The Vert ramp will host the IBMXFF Vert World Championships in Pro and AM, the NASS skateboard Vert Pro and AM competitions and the NASS Inline Vert Pro competition.” 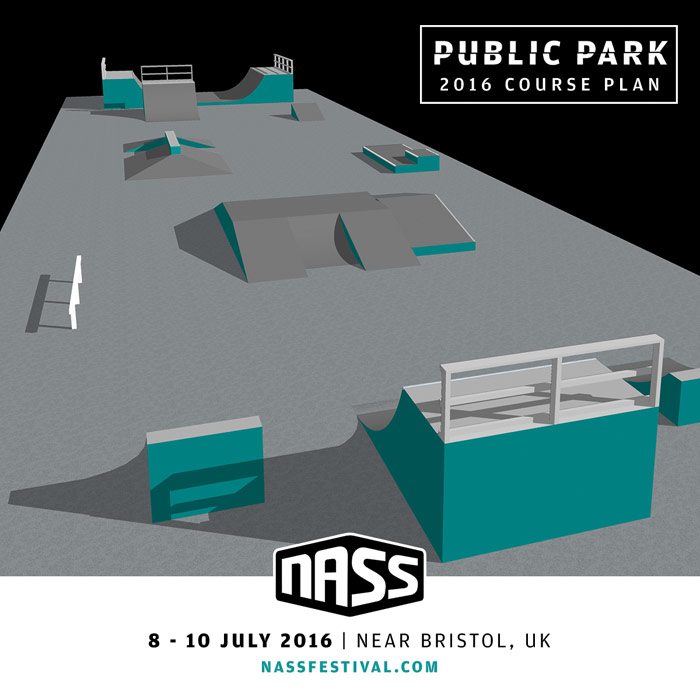 “Public Park
The public park offers a chance for everyone and anyone to get involved and ride at NASS. With street and transition obstacles, this is a favourite hangout spot all weekend for those that want to shred.

To get involved in the competition, athletes must register their interest early as there are limited spaces in both the professional and amateur divisions, which will be filled on a first come, first serve basis. http://www.nassfestival.com/event-info/athletes”