For 2016, NASS and BMX Worlds have teamed up for a massive contest that’s going to be a wild one. The crew at Ride UK sat Mat Hoffman down on his backyard vert ramp to talk a little bit about the contest and a number of other topics. Hit play and take it all in! 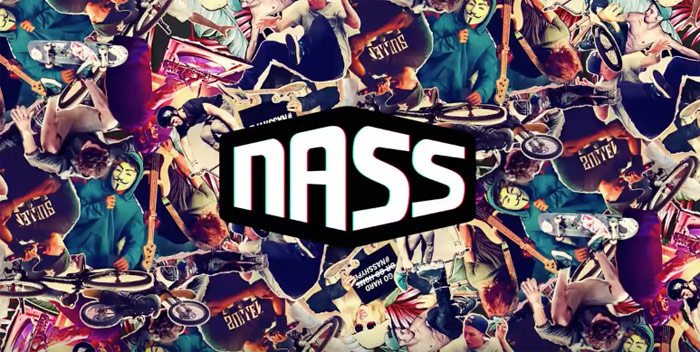 It looks like NASS Festival will be stepping things up for 2016. They will be hosting the first BMX World Championships in nearly 30 years. Get the full scoop in the press release before. This should lead to things getting nuts!

NASS Festival & the International BMX Freestyle Federation (IBMXFF) have announced today (Monday 7th March) the BMX World Championships will be held in the UK for the first time in 28 years.

The world’s leading freestyle BMX athletes will descend on the West Country in time for NASS, the action sport and music festival which takes place on the 8th – 10th July, near Bristol.

The event promises to be one of the largest global BMX freestyle events of the year with more than 450 professional and amateur athletes from over 40 countries heading to NASS to compete across three specialities of BMX freestyle; park, vert and dirt.”

END_OF_DOCUMENT_TOKEN_TO_BE_REPLACED

The 2nd round of the 2015 UK BMX Vert Series hit NASS the other week! The guys at Custom Riders put together this excellent video giving us a look at some of the crazy riding (and rough slams) that went down throughout the day! Although it looked like there were plenty of clouds and rain just waiting to pour down, it didn’t keep these guys from blasting the ramp! We need more vert!

“Round 2 of the vert series went of with a massive bang at NASS festival. One amazing ramp and so many amazing riders led to a day full of vert hammers.

END_OF_DOCUMENT_TOKEN_TO_BE_REPLACED

It has been quite some time since we’ve seen a video from Ross Penny, but it looks like he was at NASS 2015 hanging out with The Lab crew and stacked some footage from BMX Park Finals for us to check out! This one gets NSFW at the 1:35 mark for about 5 or so seconds, so we would advise scrolling past that if you’re at work. Otherwise, everything else is good to go and there’s some wild riding to take it! Man, we hope Ross starts putting out more BMX videos again… So good.

“theLAB Presents NASS 2015.
NASS 2015 brought some of the craziest BMX riding I’ve ever seen. From some ridiculous tech tricks, to airing 16ft out the top of a huge ramp and touching the ceiling. I did my best to capture and put in this video a lot of the highlights, but there are some I regrettable missed, such as the first double flair pulled in a competition by Ryan Taylor which was insane and the Best Trick contest, as I was attempting to jump my car so I could have a chance of getting home.
Needless to say, the weekend was pretty amazing as always, so sit back, watch, and hopefully enjoy NASS 2015 as if though the eyes of theLAB.
DISCLAIMER: Parental Advisory – Contains Mild Nudity.
Song: Doomtree – The Grand Experiment
Filmed and Edited by Ross Penny
rosspenny.co.uk
backtothelab.co.uk”

END_OF_DOCUMENT_TOKEN_TO_BE_REPLACED

Last weekend was the NASS Festival over in the U.K and, as expected, they threw one hell of a BMX contest! Check out highlights from BMX Park finals up above. It sounds like dirt and vert finals got rained out, but you check out out Dirt Qualifiers, BMX Park Qualifiers, BMX Park Best Trick Highlights and the BMX Shop Battle 2015 Highlights as well! All in all, plenty of amazing riding to see!

END_OF_DOCUMENT_TOKEN_TO_BE_REPLACED

Yesterday was the finals for BMX Pro Park at NASS 2015 and needless to say, there was nothing short of insane riding going on with some of the top BMX riders from around the world going to work on the course! Hit the play button above to take a look at all the bangers that went down from start to finish. This BMX contest got nuts.

“BMX Pro Park Finals, NASS 2015 – Yesterday’s competition produced some of the best riding we’ve ever seen here at NASS including the world’s first double flair in a park course competition from Ryan Taylor.

Logan Martin with a quad whip, Jason phelan with the gap to over ice, Ben Hennon with a huge opposite tail whip transfer and Mike Curley with hang 5 to nose manual to whiplash – RIDICULOUS.

Things were definitely getting nuts over at NASS this past weekend in the U.K! Check out all of the crazy riding that went down during the BMX Pro Park Best Trick! They had Ben Hennon, Jason Phelan, Jay Hobson, Alex Coleborn, Tom Isted, Logan Martin, Brandon Loupos, Mike Curley and more all getting loose.

Logan Martin with a quad whip, Jason phelan with the gap to over ice, Ben Hennon with a huge opposite tail whip transfer and Mike Curley with hang 5 to nose manual to whiplash – RIDICULOUS.”

Along with BMX Dirt Qualifiers, they had the BMX Park Qualifiers at NASS yesterday as well! The course was packed with some of the top pros from around the world along with plenty of the U.K’s finest riders who absolutely CRUSHED the ramps that they had setup. Check out this highlight reel that is just banger after bangers!

The BMX Park contest at NASS draws easily the one of the biggest crowds of the entire event and the riders showed their appreciation by putting on a show. Pure and unadulterated park destruction. Head to the NASS website to watch the riding from Mark Webb, Logan Martin, Daniel Sandoval, Daniel Dhers and more!