“We’ve got another batch of Battle Of Hastings Plaza Session videos today, this time featuring the teams who placed 7th to 4th – Team Young (Chad Kerley and Travis Hughes), Team Edgar (Justin Spriet and Broc Raiford), Team Kyle (Dan Paley and Alex Donnachie), and Team Lewis (Ben Lewis and Devon Smillie). That’s a heavy list of names so i’m sure we don’t need to prepare you – sit back and enjoy the next six minutes of crazy from the Source Plaza. If you missed the last drop of video then catch that link at the end of this one.

“The Plaza session concept was simple. Each team selected 2 riders to film a raw edit in the Plaza for one hour. More edits coming every Friday” – SOURCE BMX

Filmed by Cal Earnshaw and Rich Forne and edited by Peter Adam.

Yesterday we dropped our video from BMX Day 2016 – The Street Series: Liverpool, now we have another edit packed full of riding footage from all four of the spots that Ben Lewis, Devon Smillie and Chase DeHart lead the pack to throughout the day.

After you check this out, make sure you check out our video here — BMX Day 2016 – The Street Series: Liverpool

“A heavy crew led around Liverpool by Benny L for The Street Series on #BMXDAY. Full writeup and photo feature at RideUKBMX.com
Filmed and edited by Scott Connor.” – Ride UK
END_OF_DOCUMENT_TOKEN_TO_BE_REPLACED

Saturday, July 23rd was BMX Day and The Street Series invaded cities all over the world for massive street jams. Ben Lewis, Devon Smillie and Chase DeHart headed up the Liverpool jam which had hundreds of riders that turned out to throw down! This is a look at just some of the action that went down throughout the day from each of the spots the crew hit up! Plenty of heat in this, along with some laughs and more! It’s always crazy seeing that many BMX riders rolling through the streets like that!

Big shout out to Monster Energy for making this possible!

Filmed and edited by Will Stroud
END_OF_DOCUMENT_TOKEN_TO_BE_REPLACED

Today is the day! The Street Series annual BMX Day street rides are going down all over the world as we speak. If you follow us on Facebook, there’s a good chance your notifications were blowing up from us going Live throughout the Liverpool jam with Ben Lewis, Devon Smillie and Chase DeHart leading a massive pack through the city to different spots. We uploaded all the clips to Youtube for you to get a look at what we saw if you missed it! Big shout out to Will Stroud for filming! Big shout out to Monster Energy for making this one happen, too!

Above is a video giving you a look at what was going on at Spot 1 as everyone started warming up for the day.

Rolling to the second spot. This gives you and idea of just how big of a turn out this jam had!

A look at some of the action from Spot 2!

Had some technical difficulties at Spot 3, so here’s a look at what went down at Spot 4!

And finally, the awards for the guys that put in the most work out on the streets over the course of the day!

Expect to see more footage from The Street Series stop in Liverpool, along with Athens, Adelaide, Philadelphia and Los Angeles!

Here’s a rad video that gives you a bit of a behind the scenes look at Ben Lewis working with professional photographer, Rutger Pauw. This video is more or less a promo for the Broncolor Siros 800L flashes that Rutger is using, but beyond that it’s just some rad riding and lifestyle footage with a look at a few of the photos Rutger cooked up from the photo session. This is a real good watch regardless if you’re just into riding or if you’re also into photography. 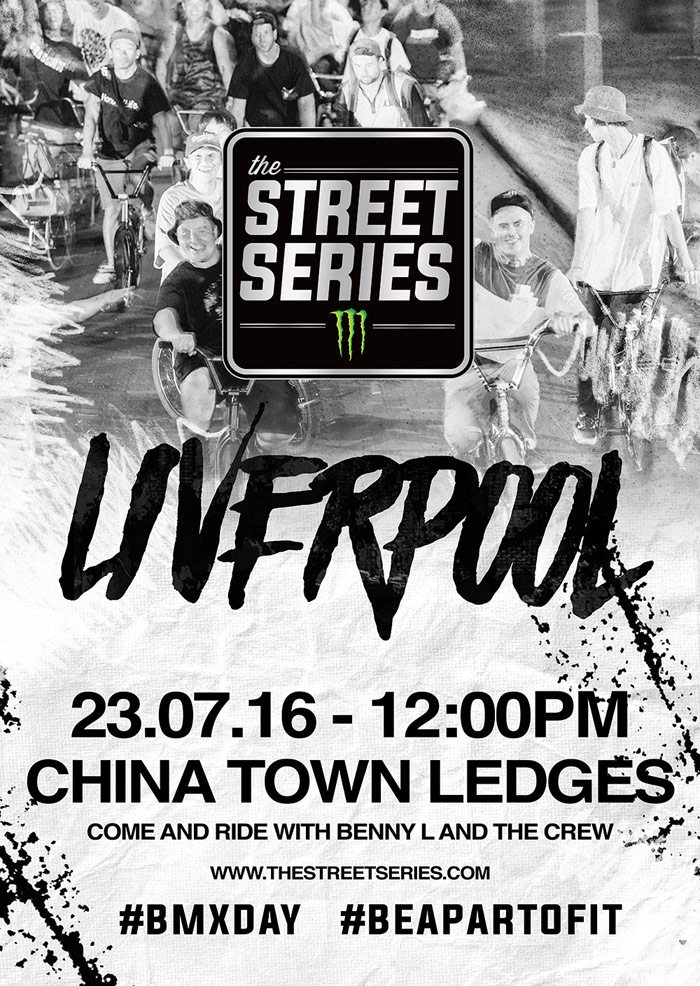 Monster Energy have just announced the 3rd location for The Street Series‘ 2016 BMX Day! If you’re in Liverpool, you’re going to want to meet up with Ben Lewis and some of the Etnies crew who will be out cruising spots throughout the day! If you’re in the Liverpool area, you’re going to want to be at the China Town Ledges at noon! Be prepared for the good times!
END_OF_DOCUMENT_TOKEN_TO_BE_REPLACED

A little while back, the Ciao Crew over in Germany made a trip to the U.K to spend some time rolling around street spots with the DUB crew before their DUB Liverpool Jam. Above is a look at some of the clips the crew stacked during the visit! As expected, plenty of gold to take in!

“When DUB held it’s annual Jam earlier this year our heads Bruno Hoffmann, Tom Schorb-Mergenthaler, Eddie Baum & Carlo Hoffmann packed their bags to chill for a week at the DUB HQ and filmed some clips.
Shoutout to Benny L & James Alcock for showing the guys around & JackDub for the hookup!