We have already seen a few videos from BMX Day in Los Angeles (BMX Day Los Angeles 2016 Highlights and then The Street Series – Los Angeles – BMX Day 2016). Now, we have another video for you to check out. Here’s a raw cut DIG dropped from the day which is filled with riding and a look at what it was like cruising around in this mob of BMX riders.

“Wes McGrath went behind the scenes for DIG at this year’s #BMXDAY jam in LA, hosted by Dakota Roche. Starting out at Hollenbeck Plaza over 400 riders showed up for yet another memorable day. Featuring Tony Neyer, Dak, Ethan Corriere, Justin Spriet, Alex Siemon and more… Stay tuned all the way to end to catch some crazy clips from the last spot! Once you’re finished make sure you catch our ‘In The Cut’ video from the Adelaide Street Series jam hosted by Alex Donnachie.

Endless Mag coming through with a fire video from The Street Series‘ BMX Day jam in Philadelphia. This one was headed up by the Animal Bikes crew and based off the video it was a day packed full of damn good riding even though it was hotter than hell followed up with a monsoon of rain. Ryan Navazio put together this dialed video from the jam, so you know you can’t pass this up!

Yesterday we dropped our video from BMX Day 2016 – The Street Series: Liverpool, now we have another edit packed full of riding footage from all four of the spots that Ben Lewis, Devon Smillie and Chase DeHart lead the pack to throughout the day.

After you check this out, make sure you check out our video here — BMX Day 2016 – The Street Series: Liverpool

“A heavy crew led around Liverpool by Benny L for The Street Series on #BMXDAY. Full writeup and photo feature at RideUKBMX.com
Filmed and edited by Scott Connor.” – Ride UK
END_OF_DOCUMENT_TOKEN_TO_BE_REPLACED

If you follow The Street Series on Snapchat, there’s no doubt that your feed was blowing up on BMX Day with all the different jams going on all over the world. Here’s a compilation of 15 minutes of Snapchat footage that was collected over the course of the day. A little bit of riding, a lot of random clips and plenty of laughs. That narrow screen going hard.

“Wanna see some randomness from our jams on BMX DAY 2016? Well we had a bunch of the crew take over our Snapchat on Saturday July 23rd around the world for nuff LOLs

Here’s yet another video from the Los Angeles BMX Day jam for The Street Series! This video is packed full of heat throughout the day with little filler, which isn’t a bad thing! Check out trick after trick after trick of goodness that went down by hitting play!

Saturday, July 23rd was BMX Day and The Street Series invaded cities all over the world for massive street jams. Ben Lewis, Devon Smillie and Chase DeHart headed up the Liverpool jam which had hundreds of riders that turned out to throw down! This is a look at just some of the action that went down throughout the day from each of the spots the crew hit up! Plenty of heat in this, along with some laughs and more! It’s always crazy seeing that many BMX riders rolling through the streets like that!

Big shout out to Monster Energy for making this possible!

Filmed and edited by Will Stroud
END_OF_DOCUMENT_TOKEN_TO_BE_REPLACED

Saturday was a busy day for BMX with huge jams going down all around the world for BMX Day! Although Johannesburg wasn’t on the list of stops for The Street Series, there was still a big jam that swarmed spots all over the city! Above is a BMX video giving you a look at some of the action that went down throughout the day! After you give that a watch, we have a fresh new PHOTOGALLERY by Grant Maclachlan from the jam for you to check out, too! Hit that link below!

Filmed and edited by Kevin Schnider

As we rolled up to Museum Africa it was pretty clear we were going to have a huge crew. Already at 10am there was a posse 50 deep playing game of bike
and entertaining themselves on the various jibs the meet up spot had to offer. It’s always cool coming up to Joburg and meeting so many new faces and all the different styles that come with it.

While we waited for some of the notorious late risers to arrive, Rico from the Evals BMX Shop broke out the flat rail and his gnarly wooden kicker that looked like something out of Hot Rod.
I’ve never seen so many tricks go down on a flat rail in such a short space of time! Standouts in my mind were Darren Oatley’s switch pegs whip, Hann Jansens backwards crook wizardry and Nathi’s backwards manual combos.
Paul Soderlund managed to stick a super long manual line while dodging 100 riders and pedestrians just in time for a quick group shot before we hit the streets with the mob.

From that point on, the whole day pretty much turned into a blur of cranking around town, blocking traffic, incidents with the cops, handing out a large amount of tubes after riding a sketchy glass ridden bank under the highway followed by witnessing Murray Loubser and Jason Hood lay down two bangers on a crazy setup which can only be illustrated in the gallery and video.

Just when everyone thought the day was over, someone suggested a damn long jump contest! While I’d never openly condone such a thing because of them being notoriously sketchy and dangerous.
There were more than a few willing candidates ready to send themselves off the kicker to their doom. I swear if some of these kids moms saw what was going on their bikes would be up for sale the next day.
Luckily no one got seriously injured, Sean Fritz definitely has a damn guardian angel or something. After taking a massive slam (Watch video) he took home a tough as nails package from Fox Head South Africa earning himself a new helmet, which was quite fitting.

Huge shout out to everyone that made it out this year, the Botswana crew and the brands that got involved. Monster Energy, Vans ZA, Evals BMX, Hunter BMX, 1933 Classic Tattoos and Fox Head South Africa.
Special mention goes out to Hann Jansen for all the help leading the pack to spots. Kevin Schnider and Grant Maclachlan for handling the visuals. We hope jams like this inspire you to continue pushing and remind you that we’re all part of one big family! #BMXDAY has become a global success! #Bepartofit”” – Colin Loudon

You can check out the Photogallery from the day here — Photogallery: BMX Day 2016 Johannesburg

END_OF_DOCUMENT_TOKEN_TO_BE_REPLACED 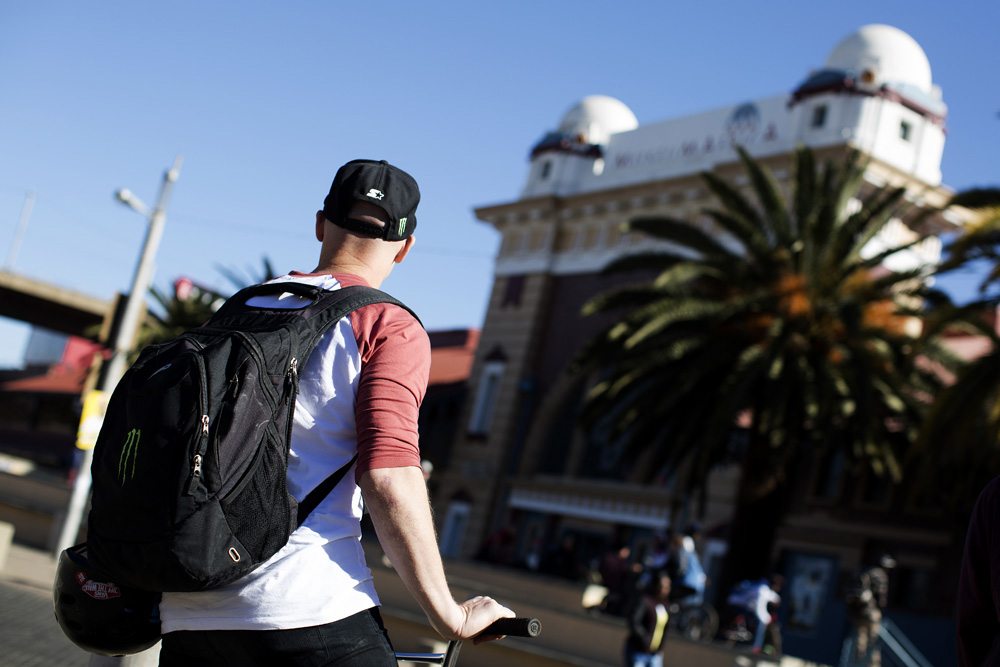 ALL PHOTOS BY GRANT MACLACHLAN

Malcom Peters rolling up to the Africa Museum. 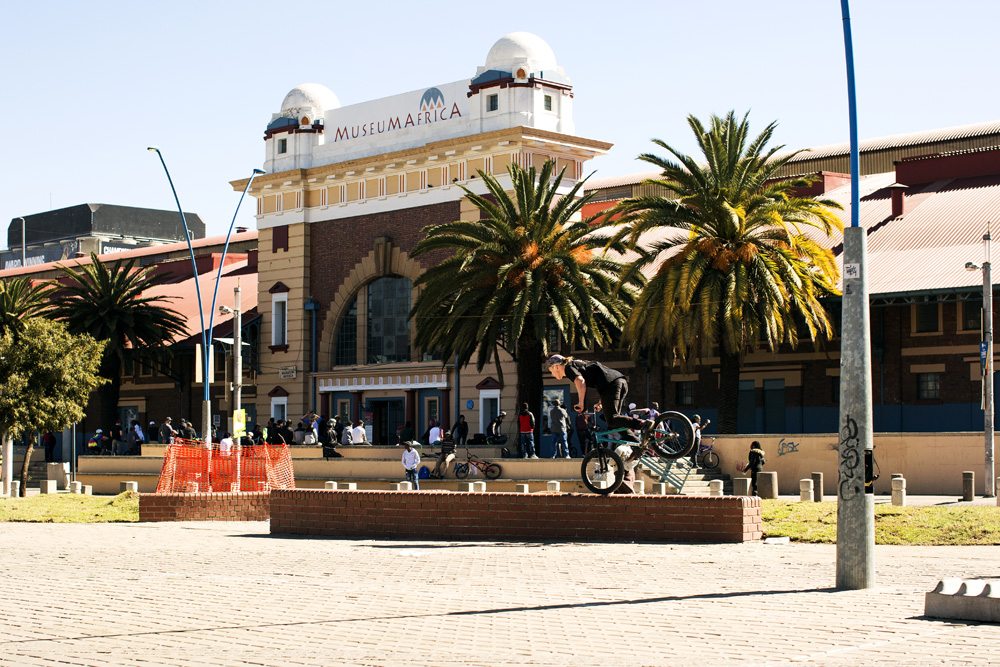 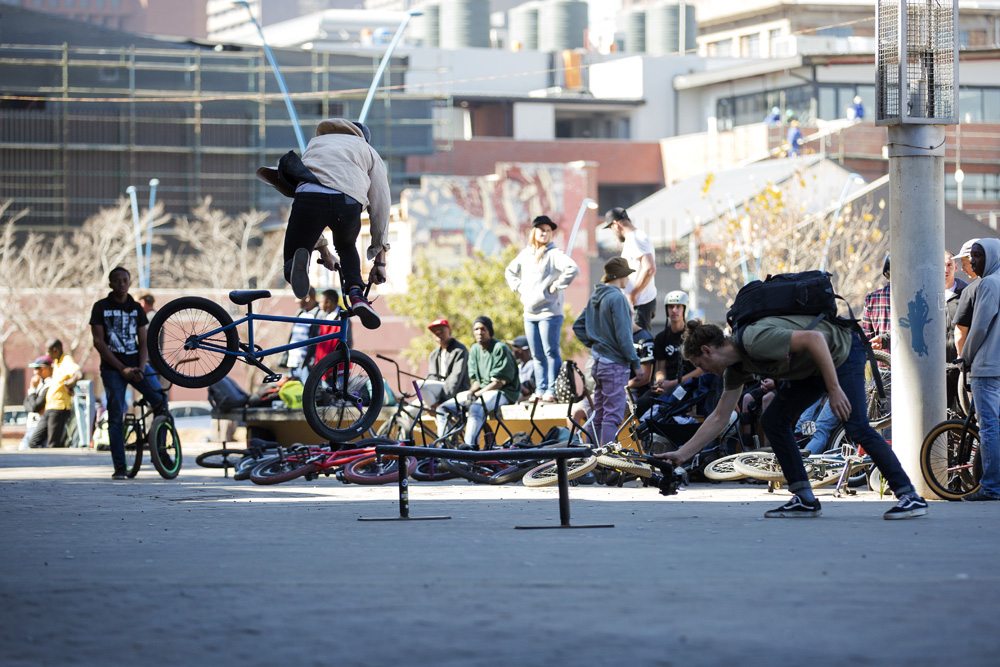 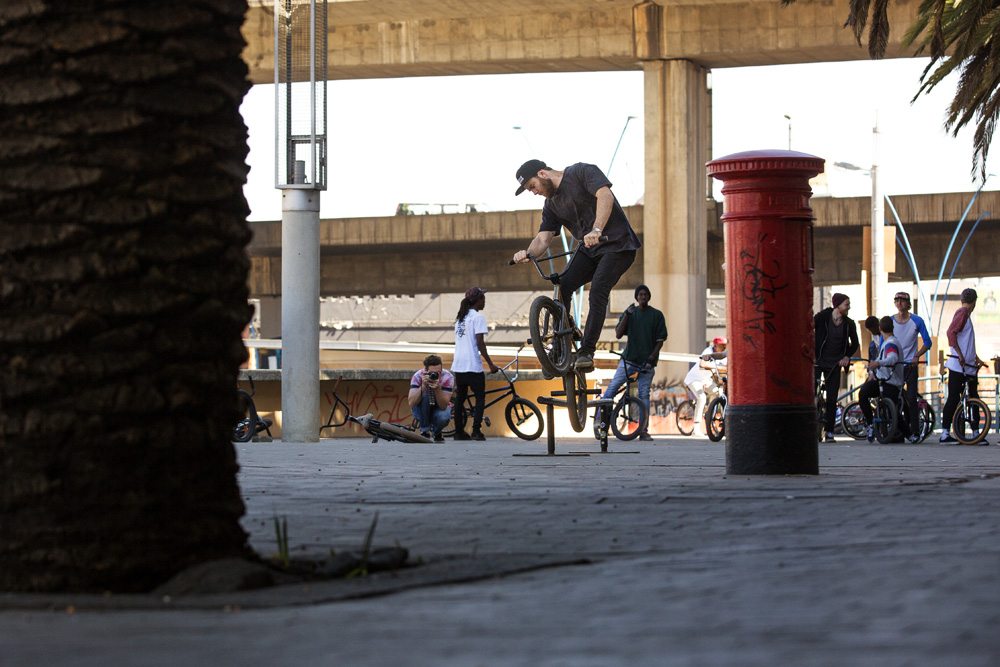 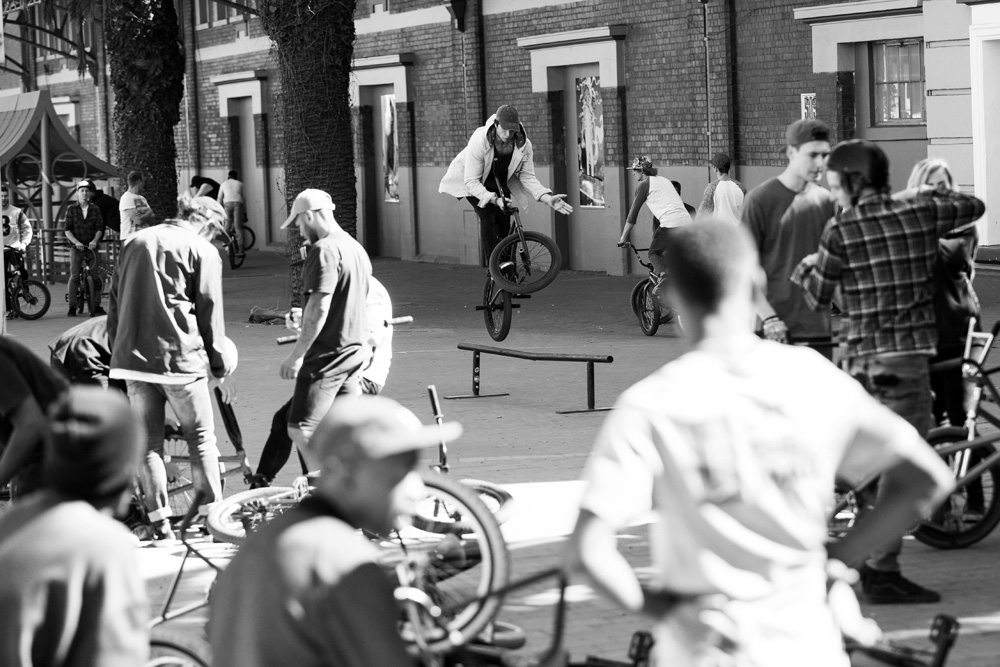