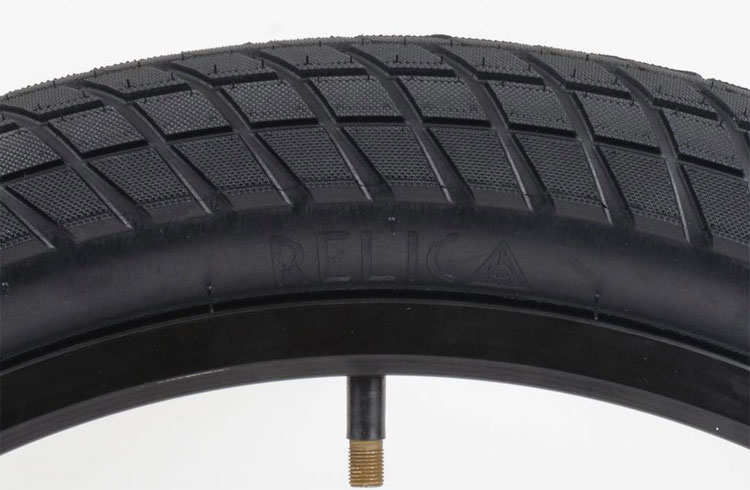 It looks like Ashley Charles has some new tires in the works for Relic that will be available in August! Not much for details as far as sizes and everything goes, but it looks to be geared more toward trails and transitions like all of their products. The tires have a fairly aggressive pattern that wraps around the edges with knurling for extra grip. Based on the pattern, it should still roll real smooth on concrete! We’ll get full details closer to when they are available! Until then, check out another photo below! 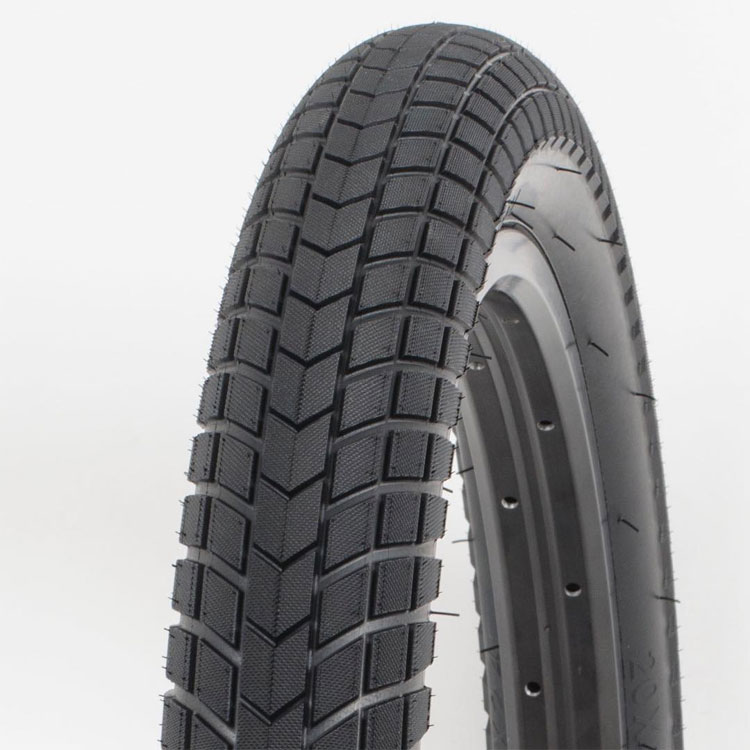 What do you think of the Flatout tire from Relic? Are you thinking about picking up a set when they drop? Let us know what’s on your mind in the comments below! 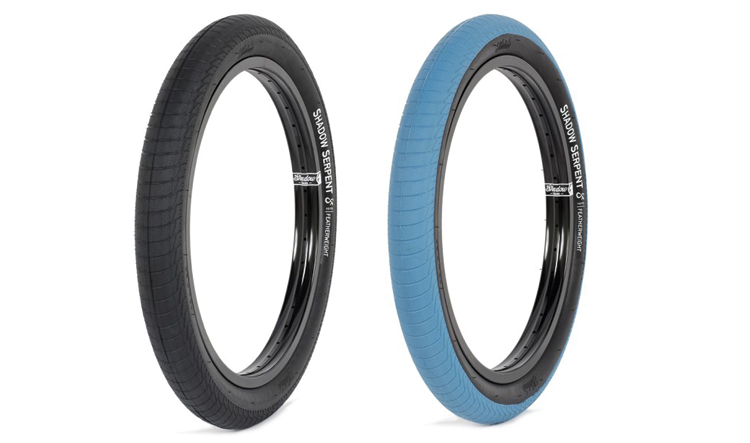 Thinking about picking up some new BMX Tires? Here’s a look at the new Serpent Tire that The Shadow Conspiracy just released for the riders looking for a lighter weight tire for ramp riding. The tire features a high thread count casing that allows for less rubber material, which helps reduce the weight. It has a custom engineered low profile, directional tread pattern with micro-knurling that’ll give you plenty of grip with low rolling resistance. The tire even squeeks for those of you who look for that feature in a tire. 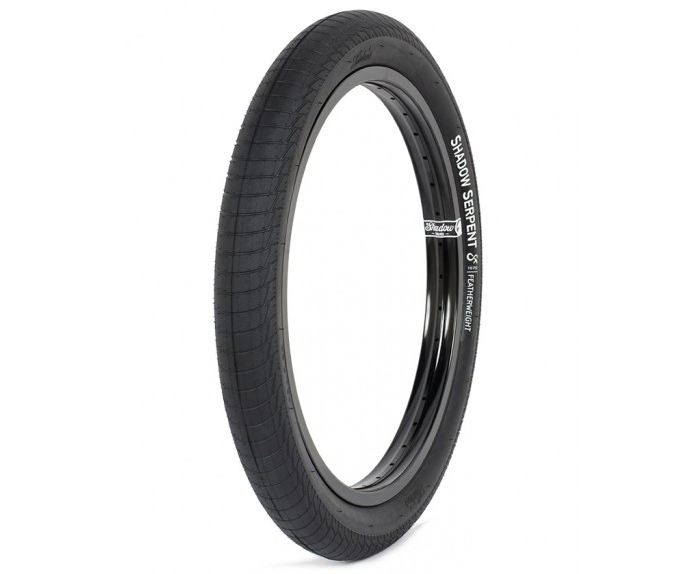 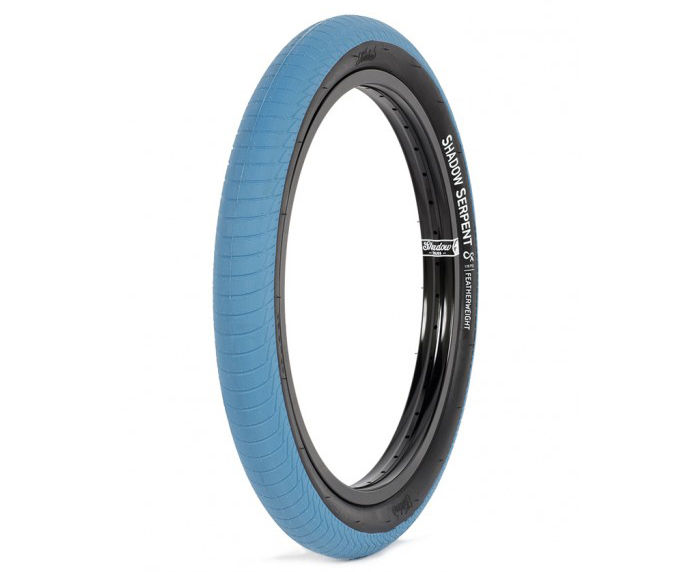 What do you think of the new Serpent Tires from The Shadow Conspiracy? Did you have any questions? Let us know what you’re thinking in the comments below!

Not quite what you had in mind? Check out more BMX Tires! 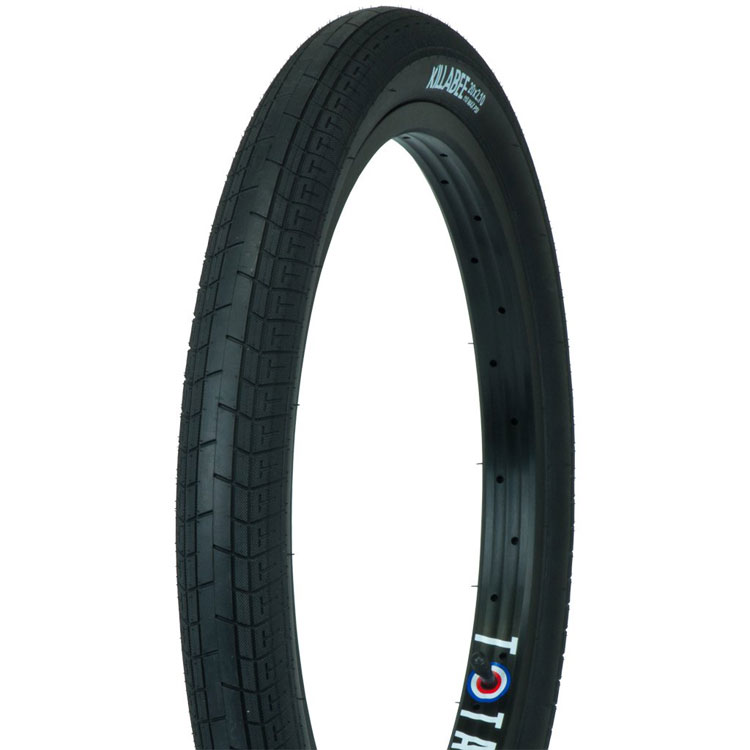 Are you looking for some new BMX tires? Here’s a look at the new Kyle Baldock signature Killabee Folding Tire. This tire is designed for the ramp riders out there that like a narrower tire that is light weight. This tire has a 120 TPI construction with a low rolling resistance center tread with a micro-knurling on the sidewalls for extra grip while turning, a lightweight folding kevlar bead. The tire has a 110 PSI max pressure rating, a weight of 15.52 oz. (440 grams) and a width of 2.10″ only. There aren’t too many tires coming in that smaller 2.10″ size, but we would imagine a few people will be stoked on that. These are available now through BMX shops and mail-orders that carry Total BMX now or direct from their webstore as well. 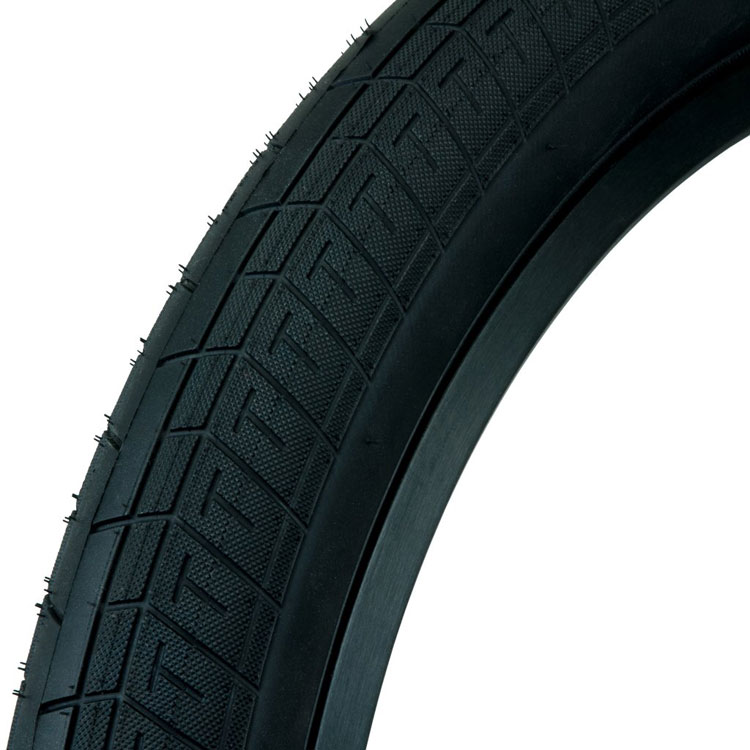 “Kyle himself, Alex Coleborn and Chance Brejnakowski are some of the top riders to run the tyre for many months in testing. The feedback has been great, the tyre is fast, light and grippy and has been very durable. We are delighted to offer this high end high performance signature tyre.” – Total BMX 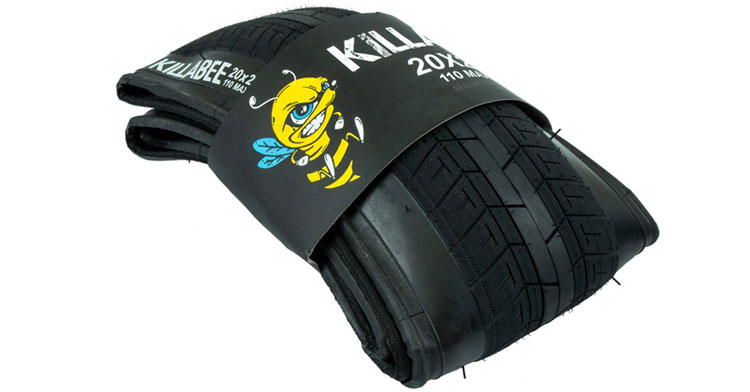 That’s a look at the new Killabee Folding Tire from Total BMX. Do you have any questions? Let us know what you’re thinking in the comments below!

Not quite what you’re looking for? Check out more BMX tires here. 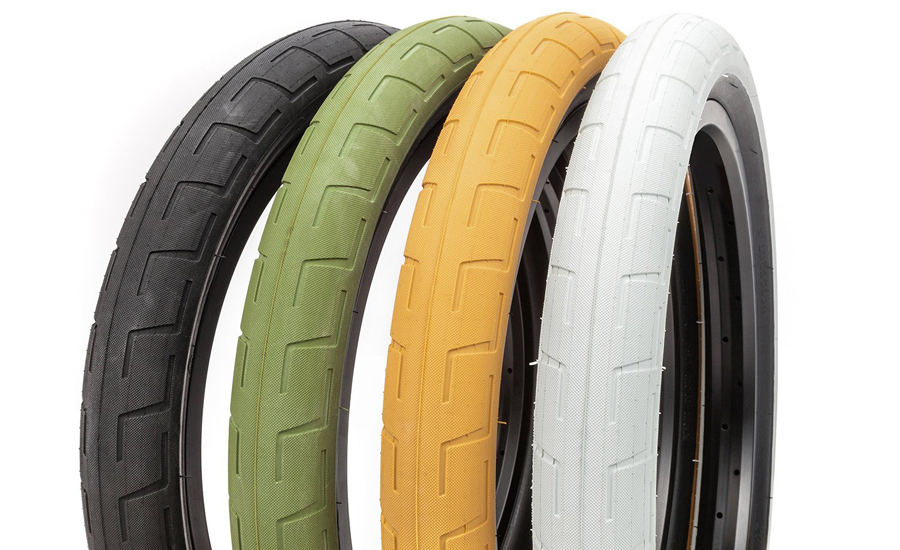 Looking for some new BMX Tires? The crew over at BSD have released the Alex Donnachie signature Donnastreet Tire in this new Gum colorway. The Donnastreet tire is based off the original Donnasqueak tire with the same grippy rubber compound the has a nice squeak on smooth surfaces, but has a smoother tread pattern for better grip on street and sidewalls that give you a little more clearance for grinds. These tires have a tear resistance 60TPI silkworm casing and come in wirebead only with 2.30″ and 2.40″ sizes that weigh in at 24.33 oz. (2.30″) and 25.39 oz. (2.40″). If you aren’t feeling the Gum, you can also find the tires in Black, White and Surplus green!

The Donnastreet tires are available through BMX shops and mail-orders that carry BSD worldwide now! 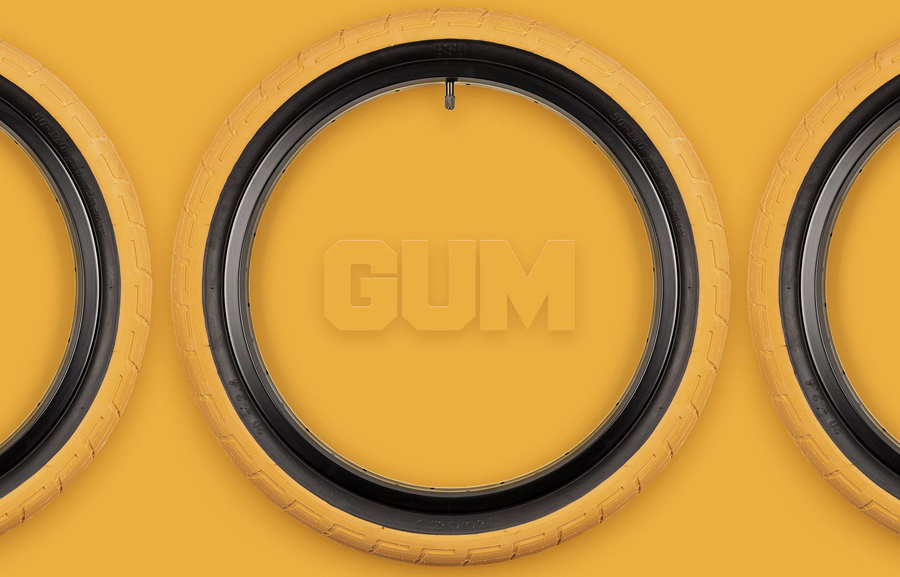 What do you think of the Gum Donnastreet tires? Are you feeling it or nah? Let us know what you think in the comments below!

Not quite what you’re looking for? Check out more BMX tires here. 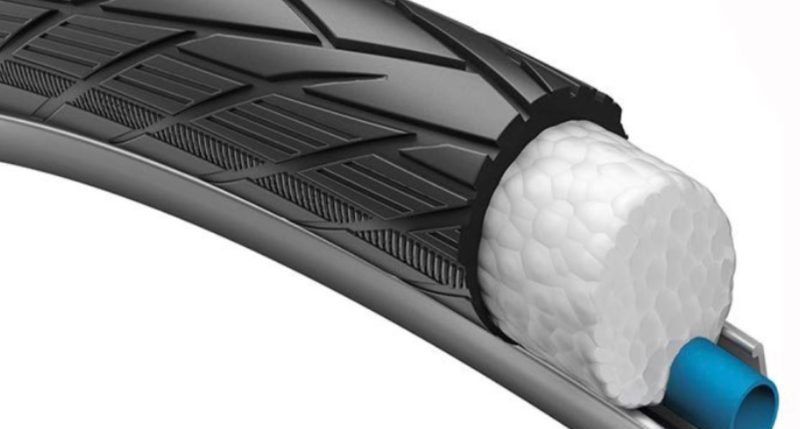 This isn’t geared toward BMX, but it’s an interesting idea! We were just checking out the Cycling Industry News website and noticed a piece they put up about the new Schwalbe Airless Tire System that caught our attention. When it comes to riding BMX, it’s inevitable that flat tires will happen; sometimes it seems almost like a curse. Over the years we’ve seen a number of ideas that have tried to eliminate the need for tubes, making it so you have one less thing to worry about when riding a bike. Most of the ideas have been outside of BMX, but we’ve seen a handful of ideas like Alienation’s tubeless tires around 2012 or so, other creative attempts at making a tubeless tire with tire sealer, the Bridgestone air-free tire idea and a few other concepts that aren’t exactly practical for BMX, but *could, hypothetically, maybe* work on a BMX bike. Unfortunately, most of these great ideas could or do work for other forms of bikes, but not for BMX due the amount of abuse a tire takes from all directions. It’s hard to get some of these ideas to actually work as well as a traditional tube.

As you can see from the photo above, Schwalbe’s Airless Tire System replaces the traditional bicycle tube with a thermoplastic polyurethane paired with an inner Airless ring. Ironically, it’s the same material that is used on Adidas BOOST running shoes, so it has a good amount of damping and flexibility that works for regular and electric bikes, which is why this idea *could* be an interesting idea that might work on BMX bikes. The reason is because it’s a softer material and it seems like a lot of riders these days are running lower PSI to absorb impacts anyway. We would also imagine that there is a way to get this material to be softer or harder depending on the riders preference, kind of like rubber durometers. So, with it working on regular bikes, it seems like it could be modified in some way to actually work with BMX tires somehow.

Being realistic… The downsides

The downside? Weight. Obviously this material weighs more than a traditional tube and, well, the weightless air it holds, which means you would see more rotational weight. That alone would be a deal breaker for a lot of riders since it not only would make your bike weigh more, but could make doing some tricks a little harder. Reducing rotational weight is why the Lunar rim, previously knowns as the Classic rim, from Flybikes has those extra holes drilled into it.

Could the perks of not having to worry about catching a flat make the additional weight worthwhile? Maybe for some of you, but there’s no doubt a majority of riders wouldn’t swing for it.

Another downside? Price. They’re giving it an €89 price tag for regular and electric bikes that they designed this for over on the Cycling Industry News website, which would be the price of about 15 tubes (depending on the price / quality of tube) for a BMX bike. We don’t believe that price includes the cost of installation, either, which requires special tools and training that shops will have to use to install this on a wheel.

Obviously this product is geared toward road and electric bikes, which isn’t a huge expense in the grand scheme of things when you get into those style of bikes, but that would be a hefty investment that probably wouldn’t pay off for a BMX bike.

One last downside that will make anyone who has blown out wheels cringe and have a possible melt down. Replacing nipples or having to build up a new wheel would be a huge hassle with this system. It’s already a pain just popping the tire and tube off. This would be even more work.

Could it work for BMX? Ehhhh…

Do we see the Schwalbe Airless Tire System being something that could be applied to BMX? Sure, it could… with some modifications. It’s just clear that the downsides of price, weight and difficulty of installation outweigh the perk of not having to switch out tubes. So, don’t expect to see anyone rolling around on a BMX bike with this technology any time soon. Either way, it’s an interesting idea to think about.

Check out the full details and more over on Cycling Industry News.

Anyone else tempted to try using a pool noodle or something, just to see if that would work instead? 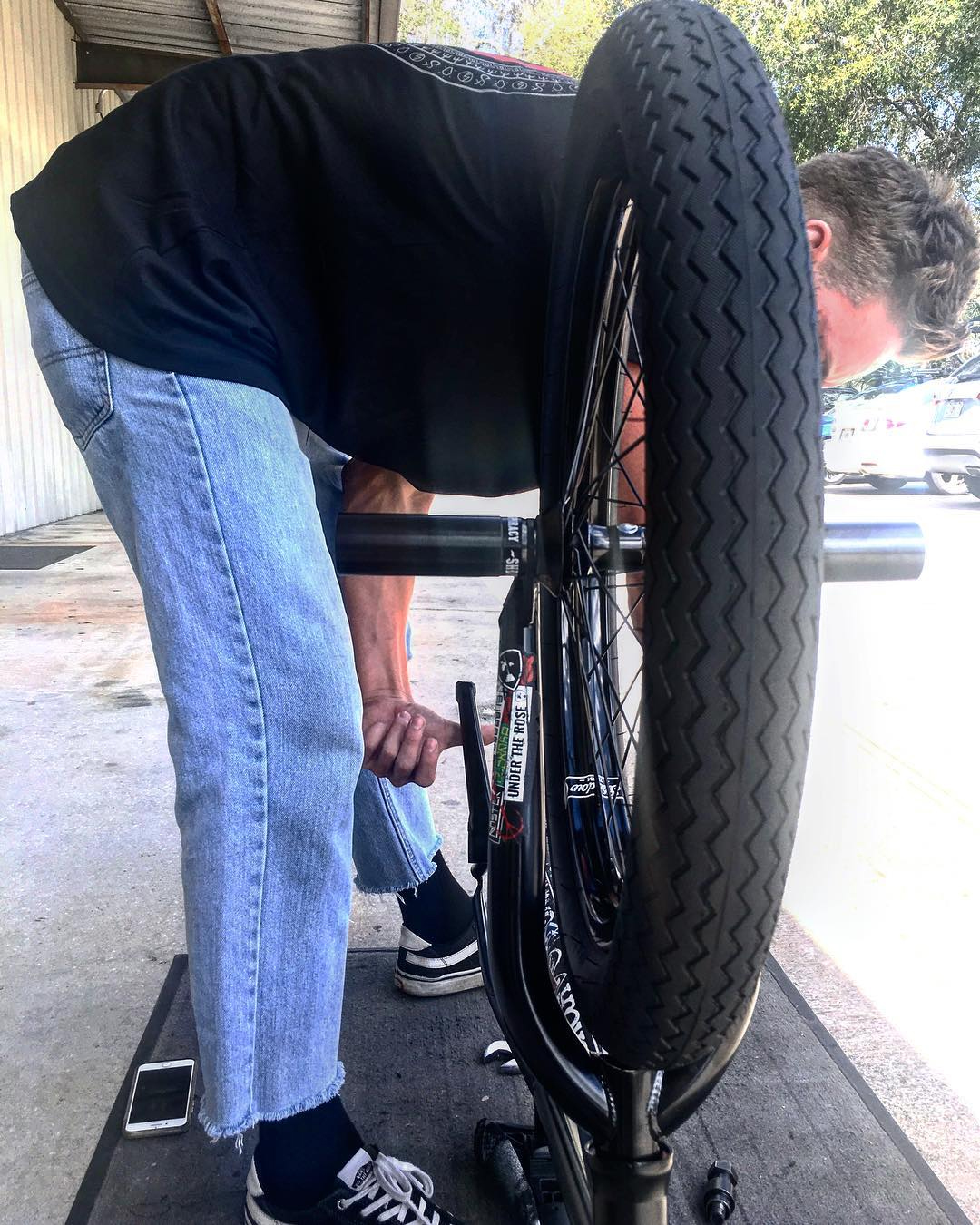 Here’s a little something we spotted while scrolling through the Instagram today. Subrosa posted this photo of Jabe Jones dialed in a new bike after his old bike felt the wrath of the FloriDeah Swampfest. In the photo, we get a sneak peek look at the a prototype Sawtooth tire that Subrosa are working on that uses a zig zag pattern that resembles, well, a saw blade. This type of pattern has been done on motorcycle tires and even tractor tires, so it has to work, right? No details as of right now beyond this photo, but we would imagine if they’re willing to show a photo of it, that it will likely be released in the near future. We’ll keep you posted when we find out more!

What do you think of the Sawtooth tire? Would you run it? Let us know what you’re thinking in the comments below!

The Cult X Vans Grips and Tires are now available in a new Pink color! 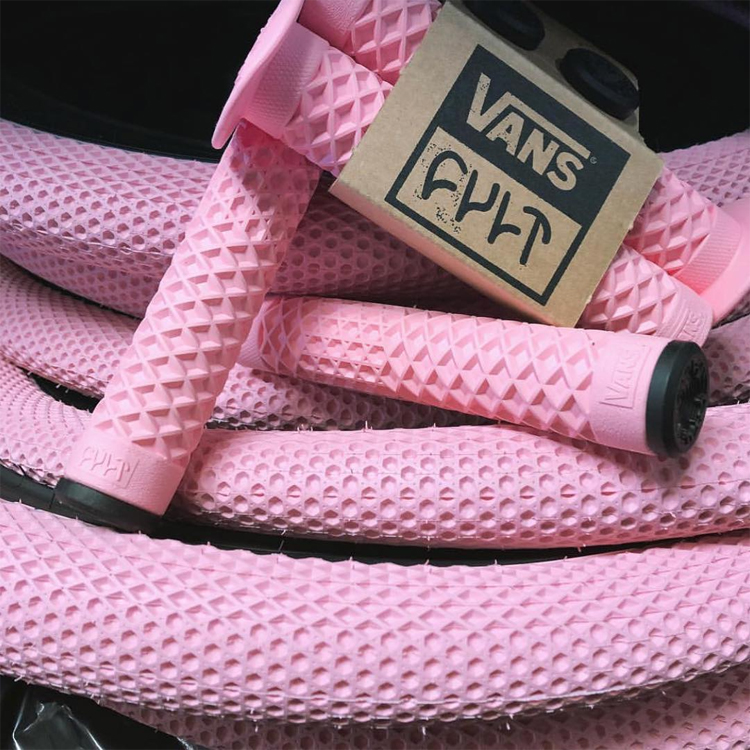 Just in time for Valentines day! The ever popular Cult X Vans Grips and Tires that are based off the Vans Waffle sole pattern are now available in this new Pink color through BMX shops and mail-orders that carry Cult worldwide now. The Cult X Vans Tire is available for $27.99 and the Cult X Vans Grips are available for $10.99! If you’re looking to freshen up your bike with a little pink, this is for you. Not sure if it will look good? Check out a video of Anthony Panza put together showing you his bike built up with the tires below! 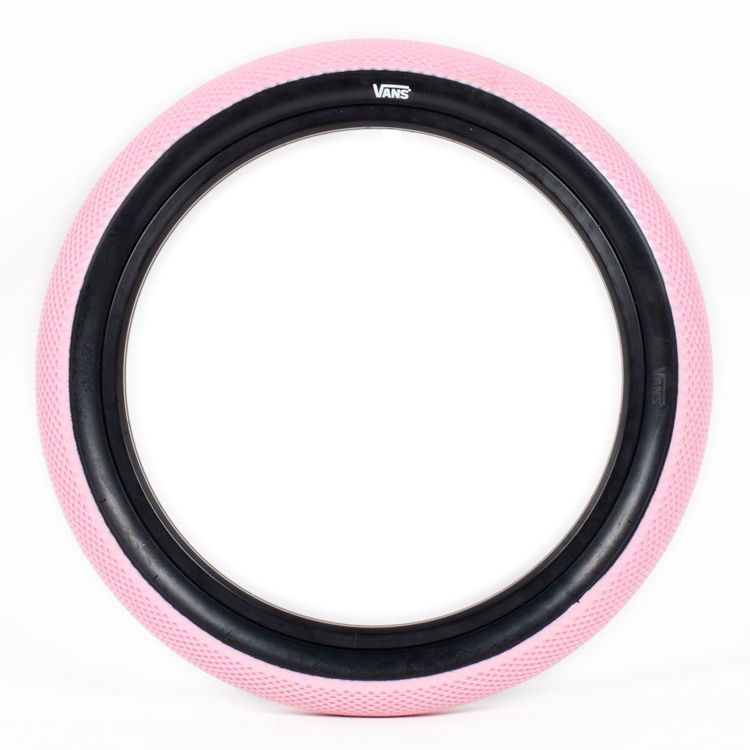 “After wearing Vans for most of our lives, we wanted to see if the Vans waffle pattern would work as well with our hands as it has with our feet. The grip was designed by Cult and sent to ODI for production. Using their proprietary rubber compound, we have created a grip that we hope will become as much of a classic as a pair of Vans.

Proudly made in the USA by ODI…”

Looking to freshen your bike up with some white tires? BSD have you covered with their Donnasqueak and Donnastreet tires. 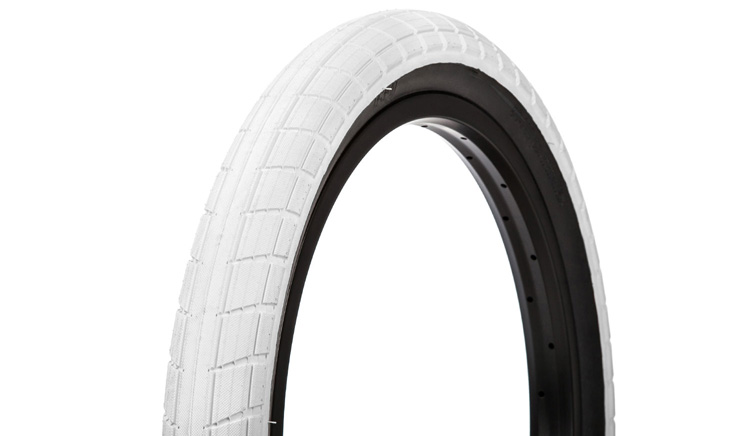 The crew at BSD decided with the winter ready to hit, they might as well make some white tires for you to get your hands on. We’re sure that’s not the actual reason, but let’s just pretend it is. They have released the Alex Donnachie signature Donnasqueak and Donnastreet tires in this new white with black wall color option to freshen your bike up with. 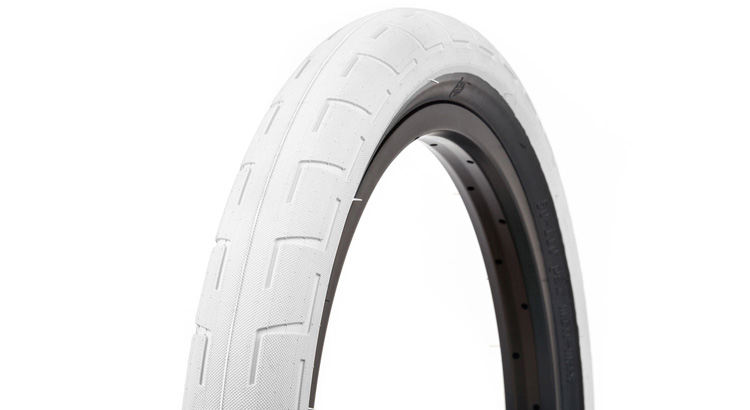 Above is the Donnastreet tire. Both tires are made from the same great rubber compound that gives you plenty of grip and the right amount of squeak. The difference between the two tires are the tread patterns. The original Donnasqueak tire has a more aggressive tread pattern that is ideal for street, ramps, even a little dirt. The newer Donnastreet has a smoother pattern with a similar look, but is more ideal for street riding. 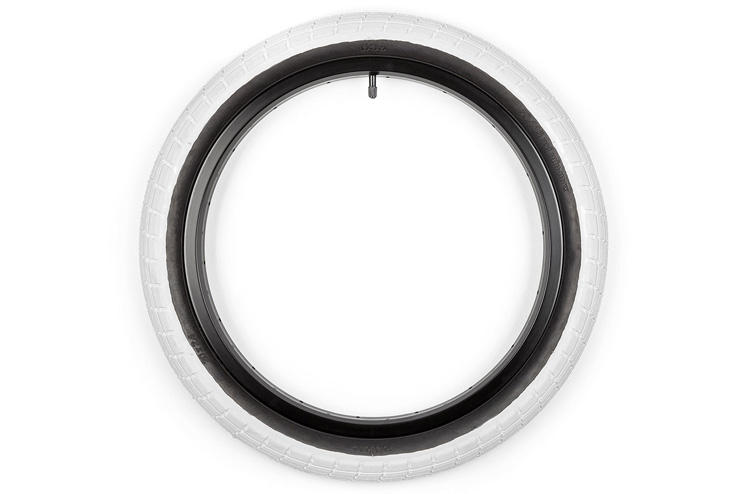 Not quite what you are looking for? Check out more BMX Tires here!