The other day Source BMX announced their new “Straight To DVD” video that will be shipping free with all orders. Here’s a raw cut from the trip the team took from Florida to Kentucky, hitting up parks and spots along the way and giving you a look at what they got into off their bikes as well. If you have just shy of 20 minutes to spare, this is worth a peek.

“Earlier this year The Source BMX guys assembled a crew to head out on the road straight from Swampfest to the SOURCE warehouse in Louisville, Kentucky: the site of their band new US venture which back then was in the early stages of coming together. With Nathan Williams, Dan Lacey, Bruno Hoffmann and Corey Martinez already onboard along with Source TM Tom Creasy, and filmer James Cox, we sent DIG’s Kevin Conners along for the ride to help capture everything and anything that went down. Featuring van life, angry cops, spots aplenty, frozen fruit meltdowns, UK S&M legend the Fids, and some welcome magic from UK Source employee Josh Heritage, the trip was definitely one to remember.

STRAIGHT TO DVD not only features the official edit of the trip from but the DVD is also jam-packed full of their favourite edits from the past year (plus a few classics) including the Lock in Series at Source Park and highlight reels from the Battle of Hastings. STRAIGHT TO DVD is FREE with all orders from SOURCEBMX.COM whilst stocks last or follow @sourceBMX to find out how to watch the road trip segment now!

The Federal Bikes “FTS” video is finally done and premiering at the House of Vans in just about two weeks! Over the past year or so we’ve been getting a glimpse into the progress of the video with the eight FTS “Lost It” series videos! Now we get a look at the official trailer that leads us to believe there might be a little more of a plot to this one beyond just insane riding for a heavy line up of riders. Hit play and check it out and get ready! The “FTS” video is bound to be a banger.

Come and join us at the House of Vans in London for the worldwide premiere of FTS, Directed by Rich Forne.

The final installment from the Federal Bikes FTS “Lost It” series has arrived, and that means that their full-length FTS video is almost here. The world premiere will be July 5th at the House of Vans In London and it’s bound to be a rager of a party. Until then, check out 7 minutes of footage featuring Anthony Perrin, Bruno Hoffmann, Dan Lacey, Joe Jarvis, Ryan Eles and James Cunningham going to work on spots in Europe, the U.S and probably a few other places while dodging missing teeth and more. This is just footage that didn’t make the cut for the final full-length video, and there’s a bunch of wild clips in this that leads us to believe the final video is going to be insane. Hit play and get stoked!

Filmed and edited by Rich Forne

We’ve embedded the previous 7 FTS “LOST IT” videos below for you to catch up on if you have missed them or wanted to check them out again!

END_OF_DOCUMENT_TOKEN_TO_BE_REPLACED

The Federal Bikes team have been putting in some heavy miles or their new “FTS” DVD, and they’ve been taking us along for the ride the whole way through. This time around we get a batch of clips from some of the riding the team got into while going to work on spots in Canada and Australia, along with some of the laughs and interesting people they encountered along the way. Hit play and take it all in!

“This is ”Lost it” Volume 7 the penultimate episode in the ongoing series chronicling the progress of Federals full length “FTS” project and features riding in Australia and Canada from Dan Lacey, Bruno Hoffmann, Anthony Perrin, Eisa Bakos and James Cunningham.” – Federal Bikes

The crew at Source BMX coming through with more highlights from last years Battle of Hastings contest. This time around we get a look at what Chase Hawk‘s team threw down. Chase, Nathan Williams, Dan Lacey and Dave Osato make one hell of a team, and these highlights are a clear reminder of that!

“Chase Hawk definitely thought through his team picks for the 2018 Battle Of Hastings!

Federal Bikes coming through with another look at what the crew has been getting into while working on their full-length “FTS” video! Here’s just over 9 minutes of riding, randoms, crashes and more from some time they spent filming in London! Needless to say, this is a awesome watch and we can’t wait to see the final video! Check it! 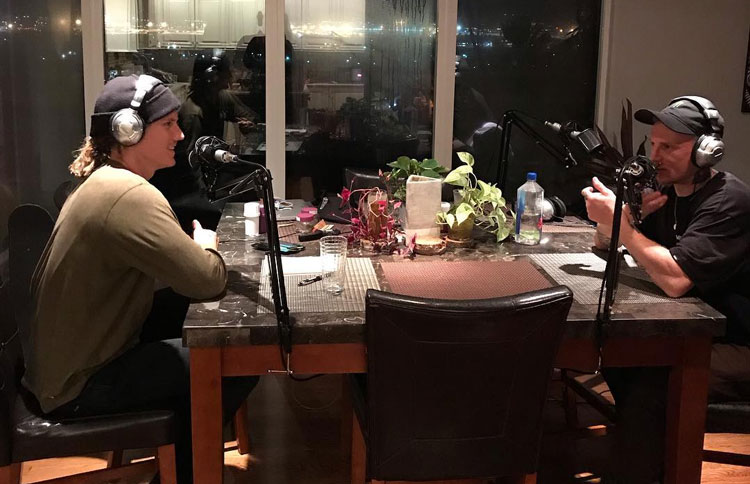 The latest round of Dennis Enarson‘s Unclicked Podcast has arrived, and this time around he sat down with Dan Lacey! As many of you know by now, Dan isn’t one to hold back and he is always going to tell it like it is. This lead to two hours of great conversations, stories and more. Dan has been crushing it for years, and you better believe this is a super good listen. You can check it out over on the UNCLICKED BUZZSPROUT PAGE since we can’t embedd it.

“This week pro bmx rider Dan Lacey is on the podcast. Lacey is known for sending it and is one of my favorite riders to watch. We’ve been friends for a while but leading up to this podcast he stayed with me for two weeks so I really got to know him and hear a bunch of his stories and opinions. He is unfiltered and not afraid to speak his mind, that is one of the reasons this podcast was so good.” – Dennis Enarson

Give the Podcast a listen RIGHT HERE!

Over the past two years, Vans have released five different “Unfiltered” videos by Rich Forne that has featured Anthony Perrin and Kilian Roth in Copenhagen, Bruno Hoffmann and Alex Donnachie in Morocco, Matthias Dandois and Alex Valentino in the United Arab Emirates, Dakota Roche and Dan Lacey in California and Courage Adams and Simone Barraco in Sicily. Now that the series has wrapped up, Rich has gone through and picked the best clips from each video and packed them into this banger of a video! Hit play to check out four minutes of amazing riding!

“After an amazing journey with 5 UNFILTERED episodes, Rich Forne closes the series chapter with FILTERED.
All strictly bangers for an “in your face” mash up of all 10 riders and 5 destinations.