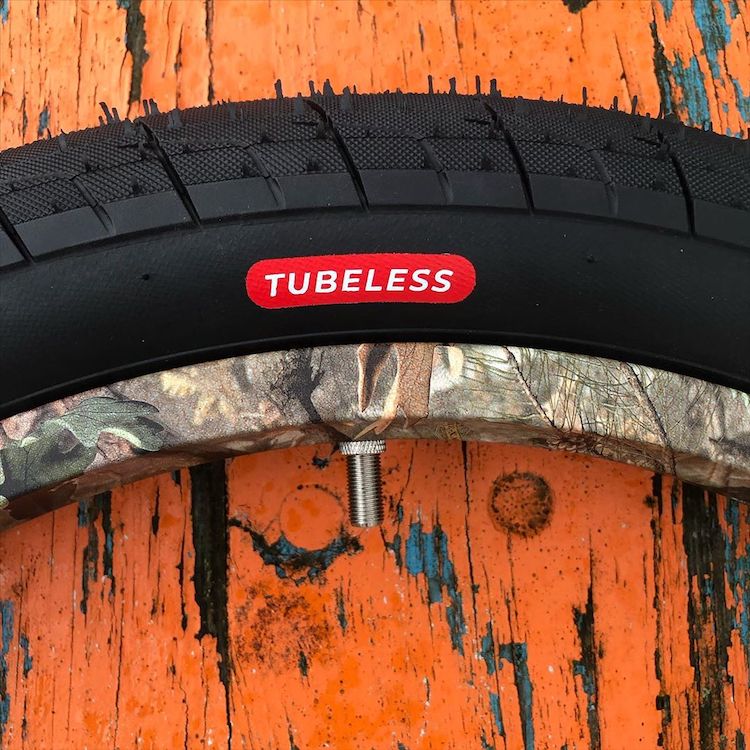 Here’s a little sneak peek we caught while scrolling through Instagram. Dave Patterson over at Eclat dropped a look at what Eclat is working on that has a few interesting things packed into it. First is the obvious, the tire says Tubeless which is interesting to see since we’ve seen tubeless tires / rims done on MTB and everything, but it has never really worked for BMX. There have been attempts in the past, but it never caught on. However, they may have found a way to make it work. The valve stem with the lock ring would hold the valve stem in place and keep everything sealed up, but we’re not sure what is going on in the inside.

Next is the rim, which we’re not sure if it’s modified to make tubeless tires work or if it’s all in the tire, but that could be interesting. Then there’s also the camouflage color that looks real interesting as well. Obviously that one would be for the brakeless guys out there, but we could see that one selling pretty well, actually.

We don’t know much for what’s going on exactly, but if Dave is leaking this one online, it’s safe to say that it has to be close to being released.

Or, this could be some early April Fools prank that came a month early… Talk about a curveball thought!

What do you think about this? Would you be interested in trying out tubeless tires or are you okay with sticking with the classic tube style? Do you have any ideas on what’s going on? Any questions? Let us know what’s on your mind in the comments down below! 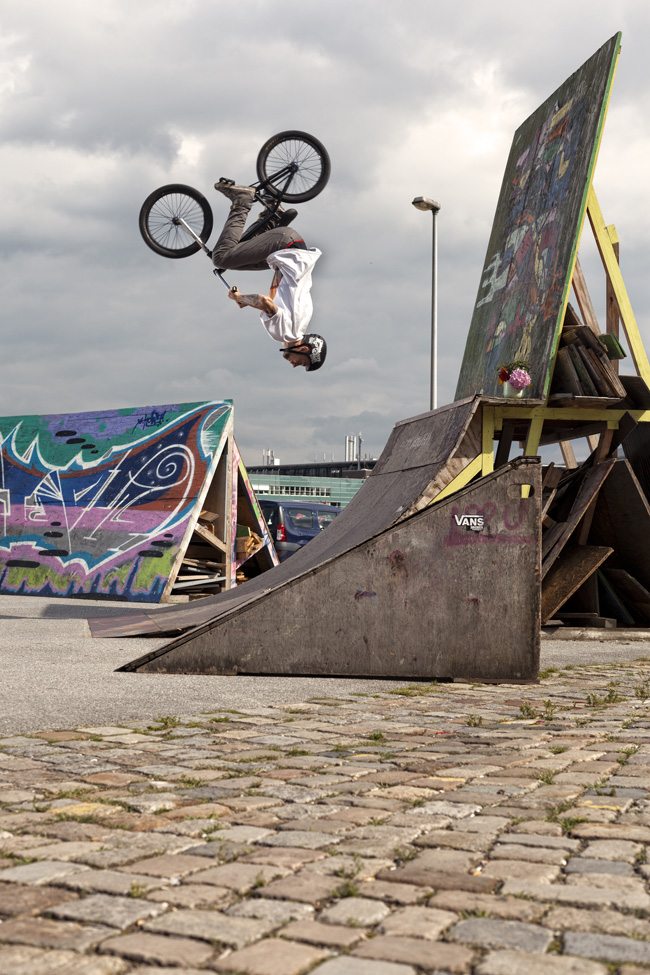 It’s pretty crazy to think about how many photos and videos never see the light of day from team trips that brands take. Last year, the Radio Bikes team took a trip to the Great North to check out spots around Belgium, Denmark and Germany. Our friend and photographer, Aaron Zwaal, was along for the trip and ended up with a bunch of photos that never ended up making it off the hard drive! Check out the photos, featuring Christian Lutz, Basti Scweizer, Leon Hoppe, Christoph Werner, Kenneth Tancre and Radio Bikes team manager, Dave Paterson below, along with the edit that came from the trip that you might have missed!

“Christoph Werner, flip fakie in Bremen: This was the first photo I’ve shot on the Radio Bikes Greatnorth trip and 5 minutes prior I met Christoph but was willingly to easily fire out this flip to fakie for me and I was stoked on the outcome.” 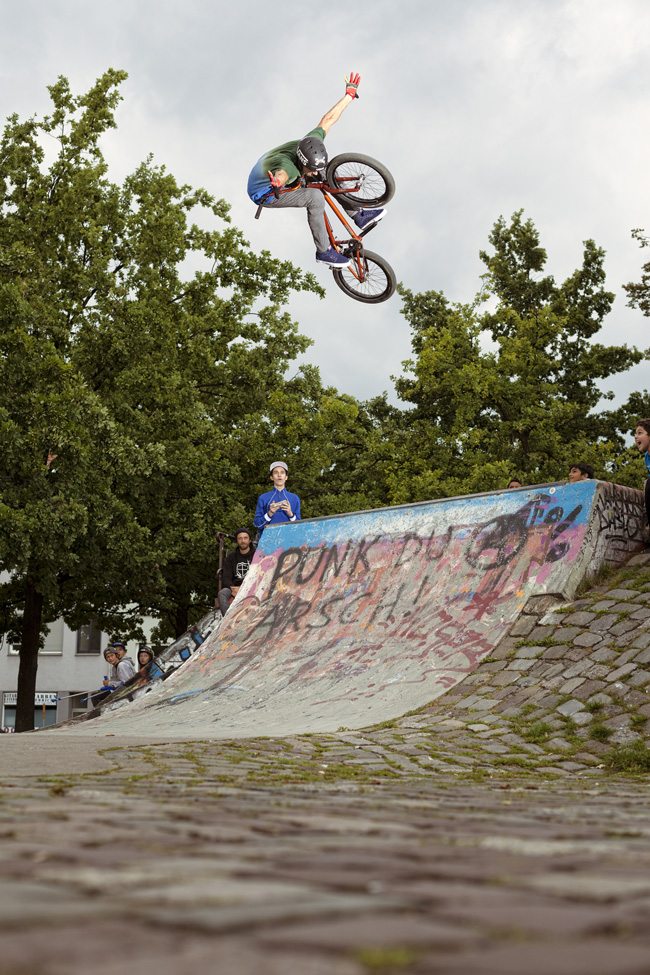 “Kenneth Tancre AKA Kenny Smash Tuck No Hander on a ghetto quarter pipe in Bremen. I was hyped to go on this trip knowing Belgium’s best park shredder would be on the trip as well. Needless to say, Kenneth’s riding made for some great photos like this one.” 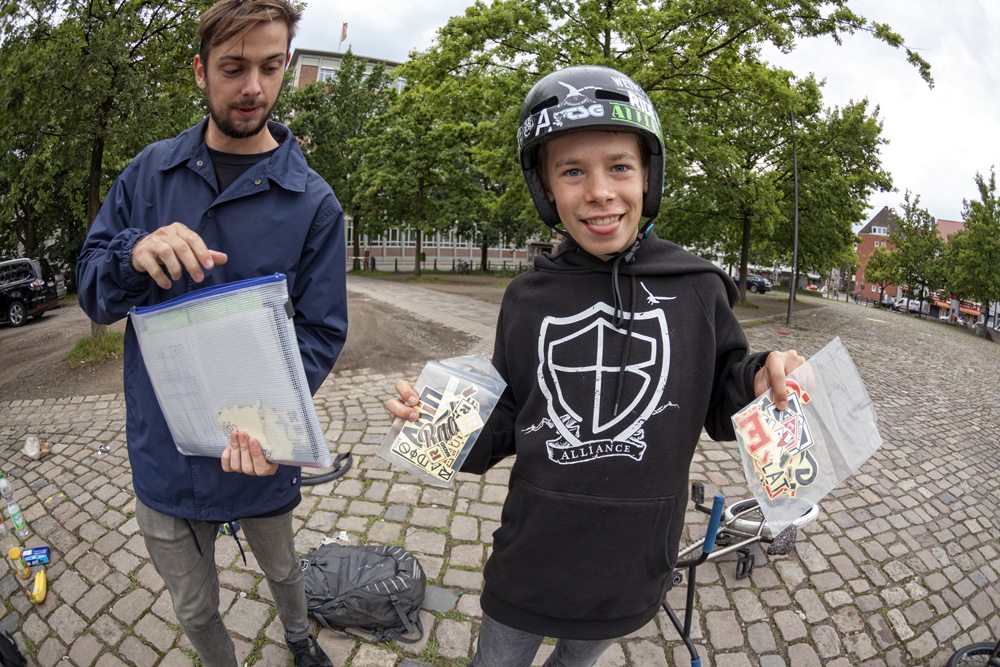 “A Bremen local hyped on getting some free stickers from team manager, Dave Paterson. No matter where you go, kids are always happy to get a few free stickers.” 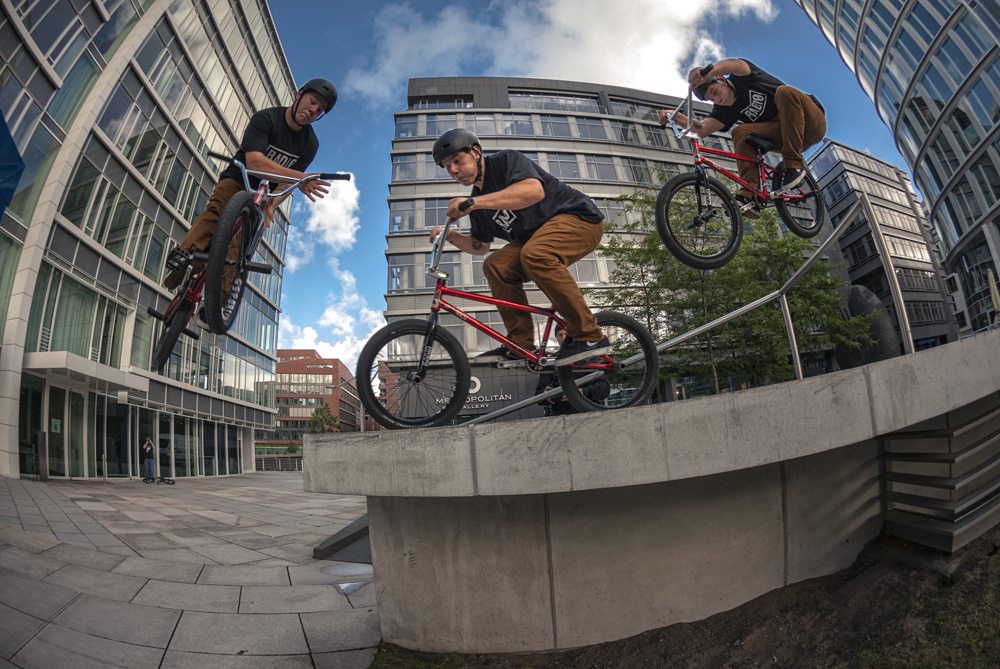 “Prior to this trip, I did not know Leon Hoppe, but by the end it’s great to be able to call him a friend. Here’s a big rail hop to truck driver he did in the streets of Hamburg, Germany!” 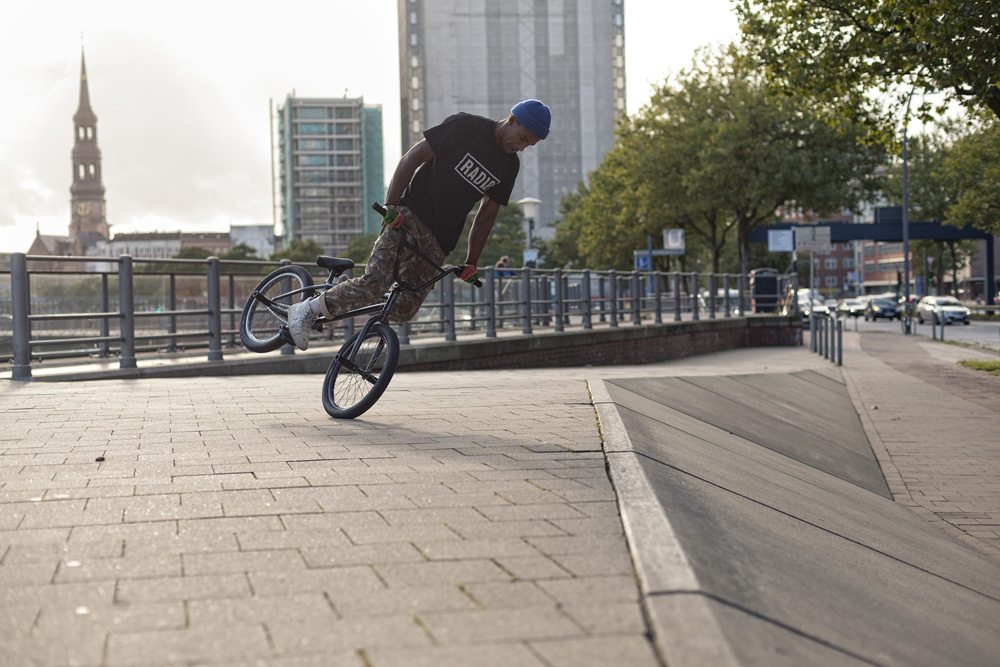 “Basti Schweizer with a G-Turn in Hamburg, Germany. Basti put in work for clips throughout the whole trip and his style combined with some nice light and a scenic background makes for some great photos like this one.” 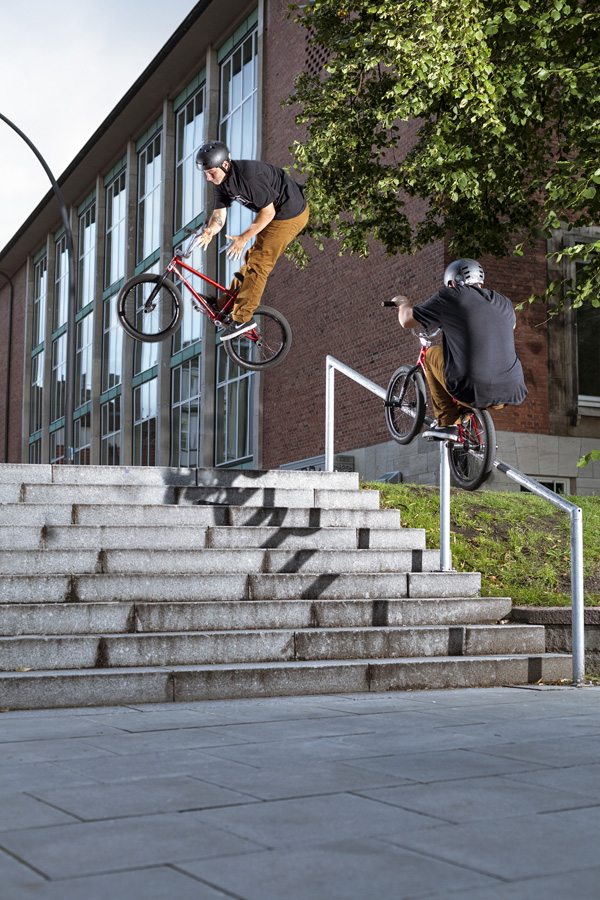 “This double peg to hard 180 barspin in Hamburg didn’t come easy for Leon Hoppe. One of the attempts, Leon ended up hitting his inner thigh on the top of the rail, leaving a crazy bruise that looked like a tattoo of the galaxy. That didn’t keep him from getting it done though! #fuckbarspins” 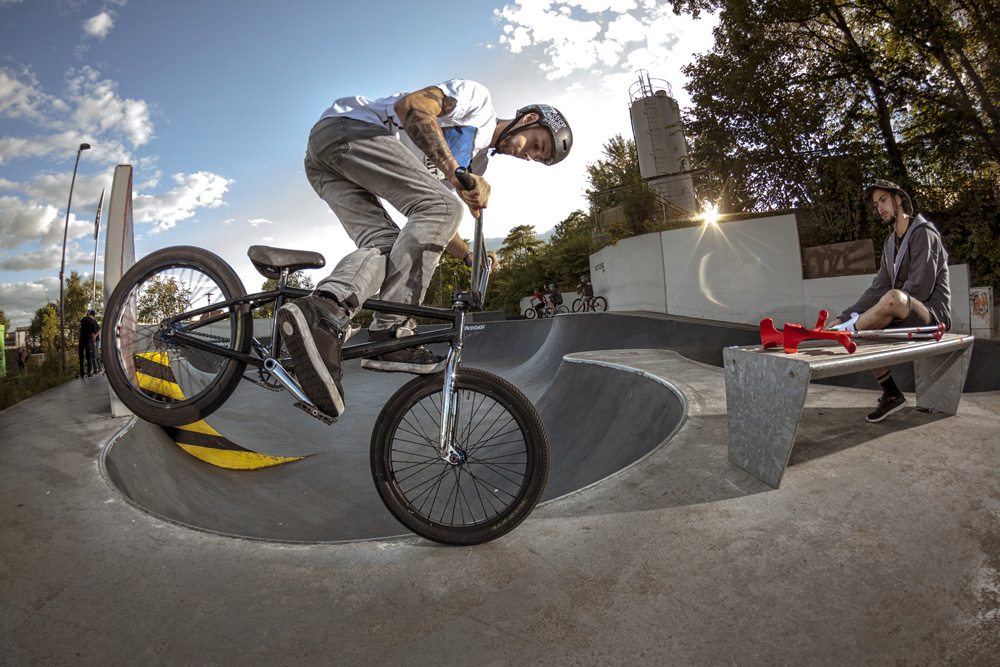 “Christoph Werner crossfooted footjam in Flensburg: I’ve never witnessed this trick prior to this, so I was psyched to photograph it. Combine the trick with the sun peeking through, a sick bowl and TM Dave Paterson hanging out in the back with an injured ankle makes it that much better.” 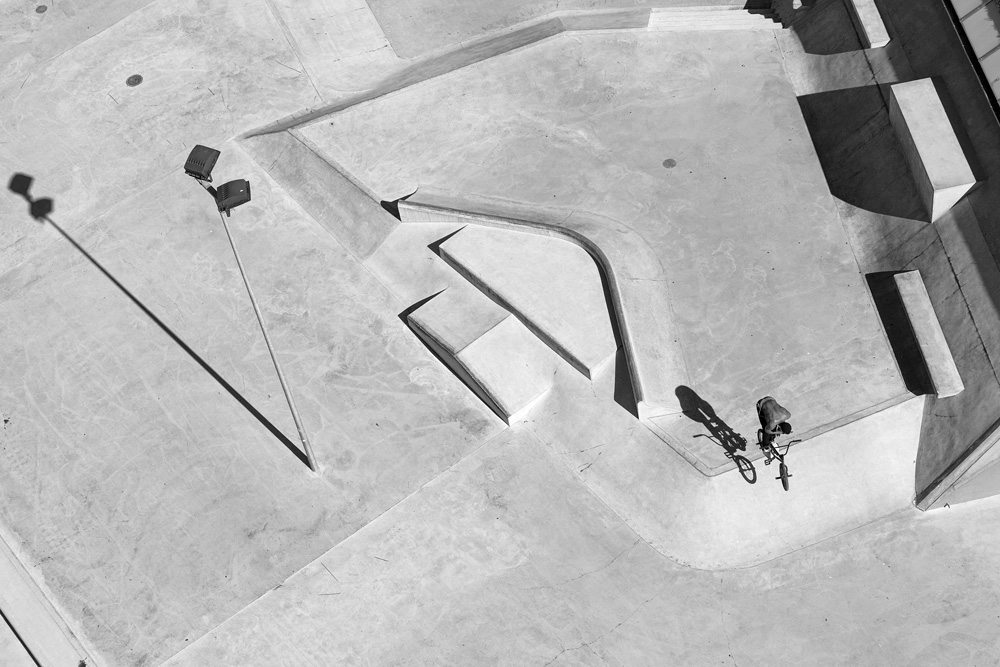 “When we arrived at the Streetdome in Haderslev, Denmark, we had such a warm welcome and we saw that there was a huge silo next to the park and we asked if you could go to the top of it. The filmer and I went up this huge thing and immediately saw this amazing view! We shouted to Basti Schweizer that he needed to do a barspin. He got the order and made it happen first go!” 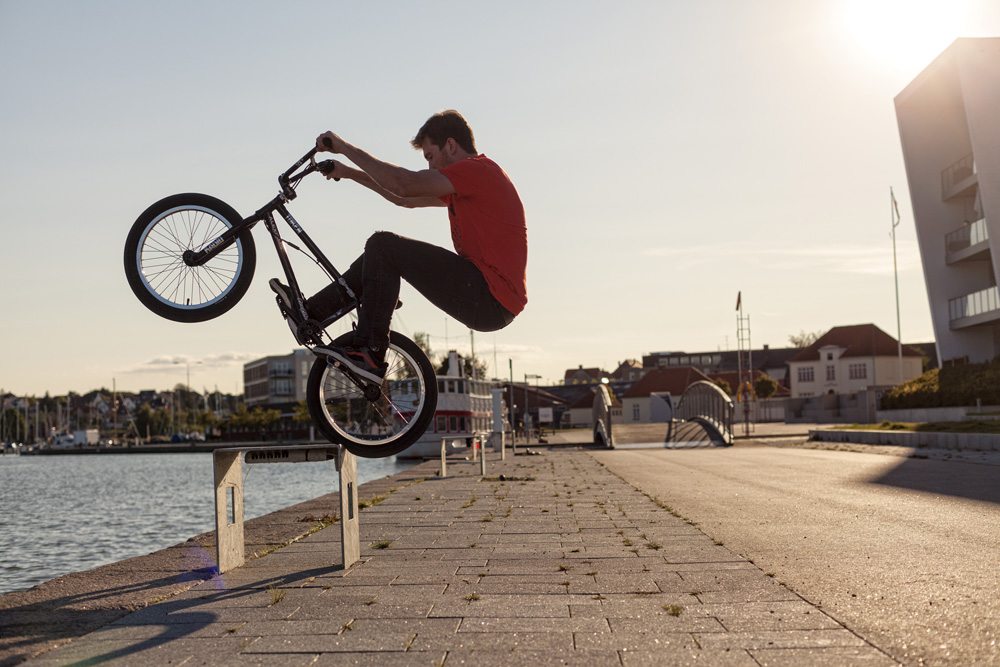 “ With the sun fading and golden hour setting in nicely in Haderslev, Christian Lutz did an abubaca on this chair for fun a few times, so I asked if he wanted to do it for the lens. This is not something you see all too often, but cool none the less!” 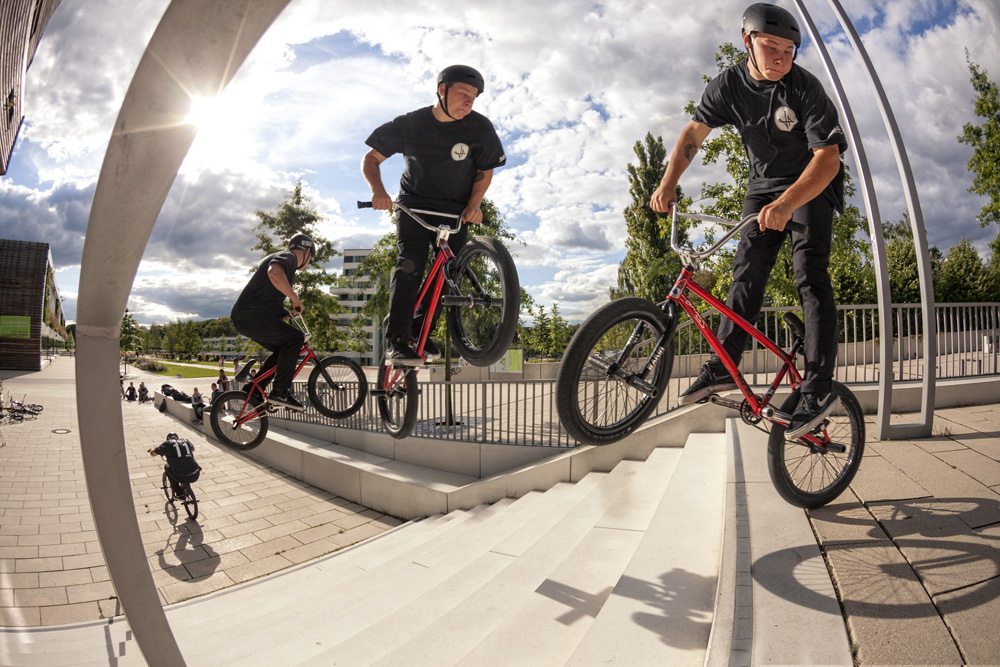 “ While cruising to the skatepark in Hamburg, we saw this huge set and Leon knew he wanted to do something on it. It was actually at the end of a line where he double pegged a similar set first and ended it with this huge 360. This sequence was also actually used as a back cover ad for Radio Bikes in BMXRider.de magazine!” 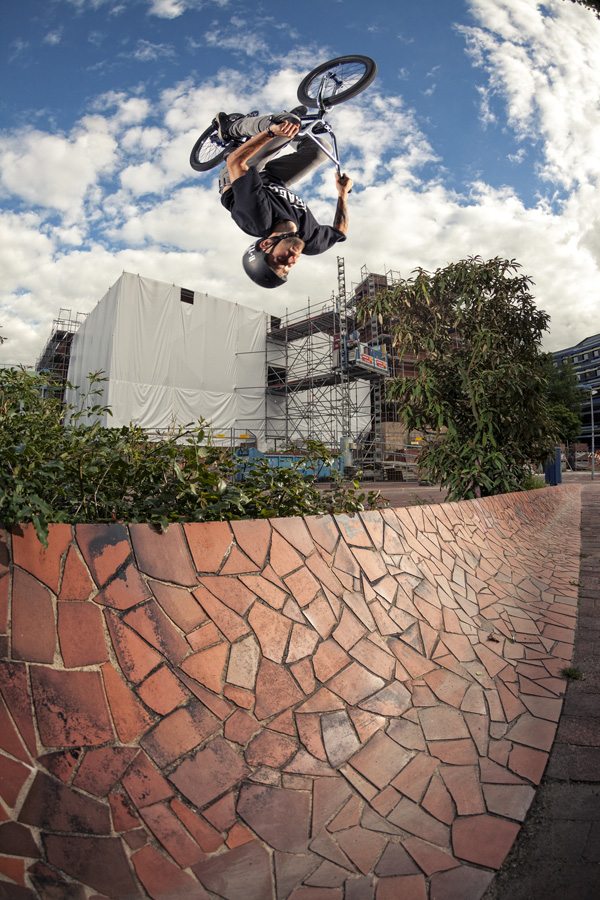 “Christoph Werner knows how to get upside down and this tight flip to flat at the end of the line was proof of that. I love how the red/orange from the transition works with the picture perfect sky and Christoph nicely placed into that sky!”

That wraps up the photos that Aaron Zwaal was sitting on from the Radio Bikes “Great North Tour”! Below you can find the video from the trip that gives you another look at what went down! After you check that out, make sure you get a look at the new Radio Bikes 2017 Completes that we posted up the other day! Also, make sure you hit those SHARE buttons up top or pass the link along so other people can check out these photos!

“With Summer coming to an end, and the cold German Autumn just round the corner, we took our European contingent on a one week tour through Germany and into Denmark on a quest to hit up some of the best skateparks and street spots in Europe.

With a freshly assembled crew featuring Leon Hoppe, Christoph Werner, Basti Schweizer, Christian Lutz and Kenneyh Tancre, the guys got to work on destroying every stop on the trip and did not disappoint.

Big thank you to Hartje Distribution, The Street Dome, Alliance BMX, RideOn BMX, Skatepark Schlachthof and everyone else who made this trip happen.