We’re still not sure what Brakeless TV is, but we’re digging it. Here’ the full live replay from the King of the 4 Block where Nathan Williams, Brett Silva, Demarcus Paul and Poor Homie Rich throw down for $1,000 cash! The stream is a little choppy at times, but you already know these guys throw down plenty of heavy moves. Check out just over an hour of footage from start to finish with commentary from Dennis Enarson and Mike “Rooftop” Escamilla!

Starting out in BMX and want to learn how to grind? Well, there’s definitely some tricks to making it a little easier to start out and progress with the different grins. Here’s a video where Demarcus Paul gives you a bunch of tips and tricks to make it a little easier. There’s nobody better to give you some advice, so get on that play button and take it all in!

“Grinds are, arguably, the most fun thing you can do on a BMX outside of simply roasting something. Learning how to grind and what to grind on can definitely be daunting, but Demarcus Paul is here to run you through the basics…” – Our BMX 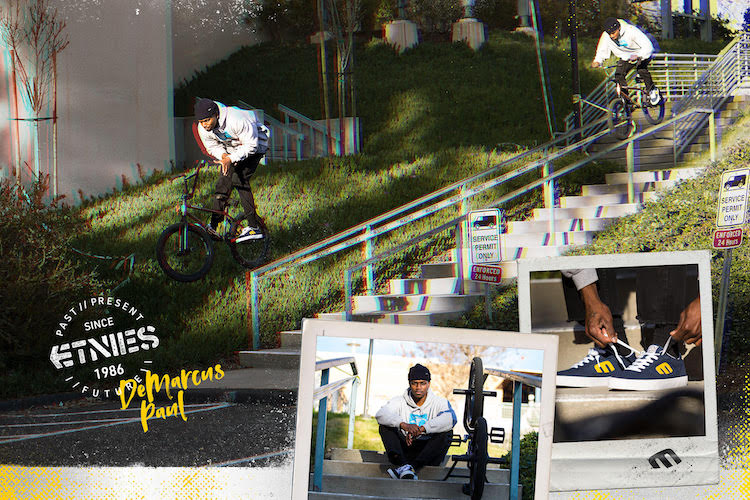 The sponsor news continues to flow! Here’s some news that probably won’t surprise too many people, but it’s great news! Etnies have finally bumped Demarcus Paul up to the Pro team after riding AM / flow since around 2015. This is super well deserved since Demarcus has been crushing it for years now, and we’re excited to see what 2021 has to offer for him!

It also sounds like Etnies have a bunch of things planned for their 35th anniversary this year. New signature shoes and colorways and more on the way. I got a preview of things to come last week and it’s definitely looking pretty rad. So get stoked for that.

“Today, etnies proudly welcomes X Games Real BMX Medalist DeMarcus Paul to the pro team! Joining the ranks of Nathan Williams, Tom Dugan, Chase Hawk, Jordan Godwin, Devon Smillie and Felix Prangenberg, DeMarcus will fit right in with the etnies’ squad.
Originally from Albany, Georgia, DeMarcus’ natural street style speaks for itself as he is known to lay down hammers with a casual approach and humble demeanor. In addition to his 2017 Bronze in X Games Real BMX, DeMarcus landed the coveted ender of the 2015 Volume 1 BMX film and the 2018 Our BMX “Headlights” video.
” – Etnies

Want to learn how to bunnyhop 360 on a BMX bike?

If you’re just getting started in BMX or just starting to figure out spins, this is the video for you. Here’s a video showing you how to bunnyhop 360 on a BMX bike featuring Demarcus Paul. This video has a ton of tips and examples on how to get the trick done, so hit play, take it all in and then grab your bike and send it. This is one of those tricks that you will have to work at, and will constantly improve even after you have done the trick thousands of times.

This is pretty rad! Chad Kerley, Demarcus Paul and Kevin Peraza dropped by Ryan Sheckler’s park The Sandlot for a session! Here’s a video from Ryan’s Youtube channel giving us a look at what went down. This is a mix of BMX and skate clips, but you already know this is loaded with dialed riding and skating worth checking out. Get on that play button!

“Earlier this year, Ryan got a call from Chad Kerley and the crew. They were planning on filming in San Clemente and wanted to shred the Sandlot to get warmed up before hitting the streets. This was the first time Chad Kerley, Kevin Peraza and Demarcus Paul stopped by and unlocked some never before seen lines within the park. Enjoy!” – Ryan Sheckler

The videos for E-FISE 2020 BMX Street Finals are now online! The line up is a stacked list of your favorite riders and you better believe these guys threw down with the kind of prize money that’s on the line. Up top is Garrett Reynolds’ video, then below you can find Courage Adams, Chad Kerley, Kevin Peraza, Dan Kruk, Demarcus Paul, Alex Leibrock and Alex Kennedy’s videos! After you watch all of the videos, go vote for your favorite over on the E-FISE BMX STREET FINALS WEBSITE!

END_OF_DOCUMENT_TOKEN_TO_BE_REPLACED

Here’s one for the riders into filming and editing. Ryan Fudger put together an in-depth video giving us a look at what goes into filming a video part for a project like FISE’s online video contest he did with Demarcus Paul. This gives you a look at the filming equipment he used, the editing software, the behind the scenes footage and more. This is real good information for people looking to get into filming or step their game up a bit. Take a look!

“If you want us to make finals, head here and vote for us (voting ends in 24 hours, so move quick):
https://ourbmx.com/efise_demarcus

Another stab at doing something different, please let me know what you guys think in the comments. Basically, FISE is holding a massive video contest and Demarcus and I put together a part for it. Along the way, I had the idea to do a little behind the scenes video…so here we are.

The compilation edits keep flowing! Here’s a new compilation of Demarcus Paul that is filled with clips from the past few years. This has clips from Instagram and what appears to be some of his video projects that you have probably seen, but having all the clips in one place makes for a super good watch. Demarcus shreds everything he touches.

Did you see Demarcus Paul is now doing it for GT?