The LFS crew have finally had enough of the cold weather, so they decided to head over to Rochester, New York to check out the new Breaking Free Skatepark and catch a session without freezing their nuts off. Here’s a look at what went down during the session! Looks like it was a productive trip and the place looks like a ton of fun to ride. Check it! 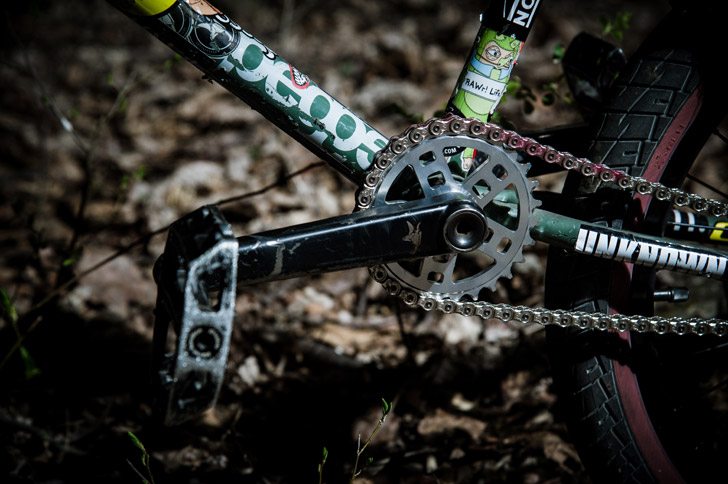 The sections from LFS‘s latest full-length video, “LFS2”, keep on rolling out. Today, the crew uploaded Jeff With Glasses‘ section online for your viewing pleasure. If you don’t know by now, Jeff is an absolute grind technician and this is a good reminder of that. Hit play as Jeff puts all four of his pegs to heavy use on every rail and ledge he came across along the East Coast.

“Jeff as a person is calm, monotone, and relaxed. However, his riding is the complete opposite. 60/40s, 40/60s, crooks, gaps, it’s all in here. I think I was more scared filming him than he was of getting the clips! Put on your glasses and watch the banger section of the video!”

We were wondering if any footage would be surfacing from this years New York Grands race that went down a few weeks back. Today, we finally get a look at the race that Tyrone Williams once again took the win at! Hit play and take the ride! 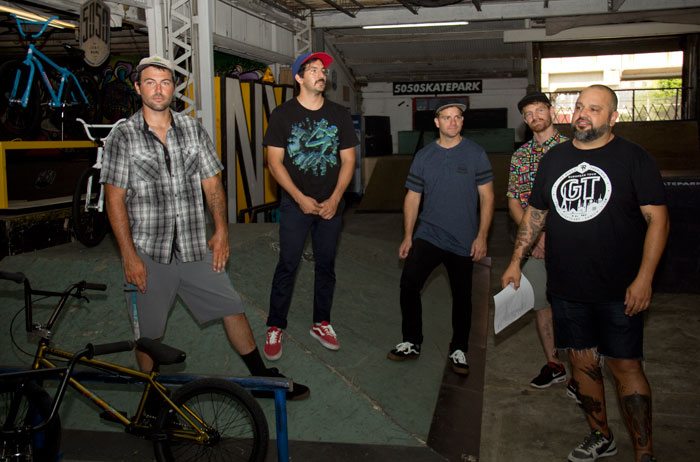 Last weekend, GT Bicycles invited us out to New York City for their 2017 BMX Product launch and jam at 5050 Skatepark in Staten Island. As you know, we’re big nerds when it comes to product and we’ve been real stoked on what GT has been doing since it brought Ben Ward on board to re-ignite their BMX program as a whole, so there was no way we could miss out on the trip out to see what they have been working on. GT brought Brian Kachinsky, Albert Mercado, Dan Conway, Jason Phelan and Jeff With Glasses on out for the session and to get their first look at all of the bikes as well. For 2017, GT have their Team Signature Series (Brian Kachinsky, Jason Phelan and Rob Wise), Team Comp series, Team Series, Performer Series and Slammer bikes that cover a lot of ground from entry level on up to higher end bikes. 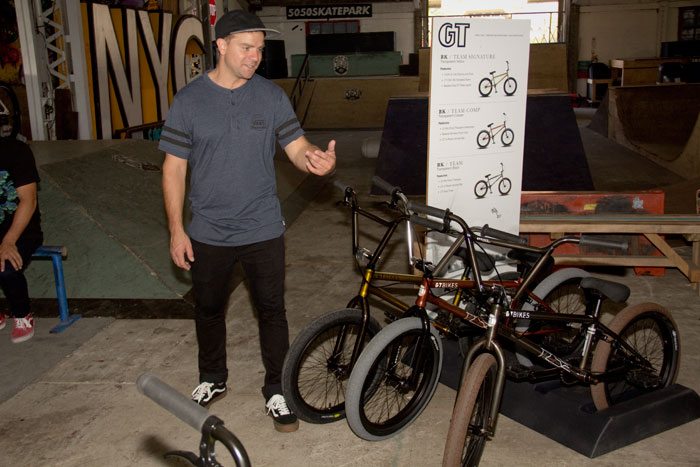 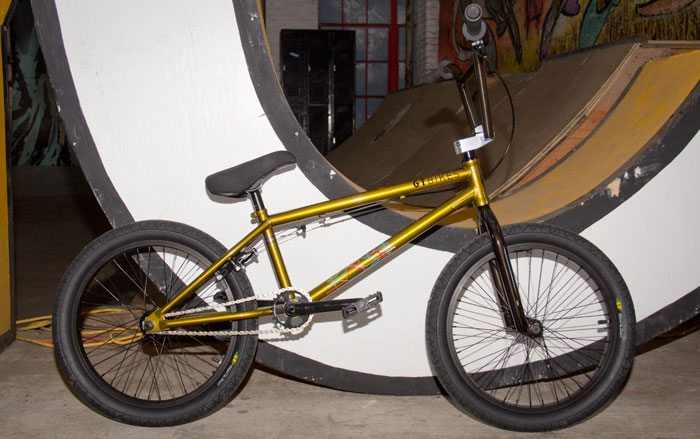 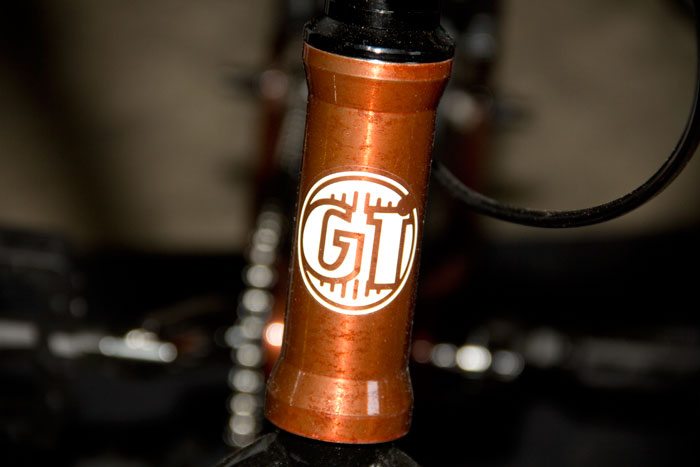 Each of the bikes feature this GT logo which is based off the sewer hole covers you can find all over the world from Brian’s hometown, Neenah, Wisconsin. You can find the sewer covers in Chicago where Brian calls home now, too. 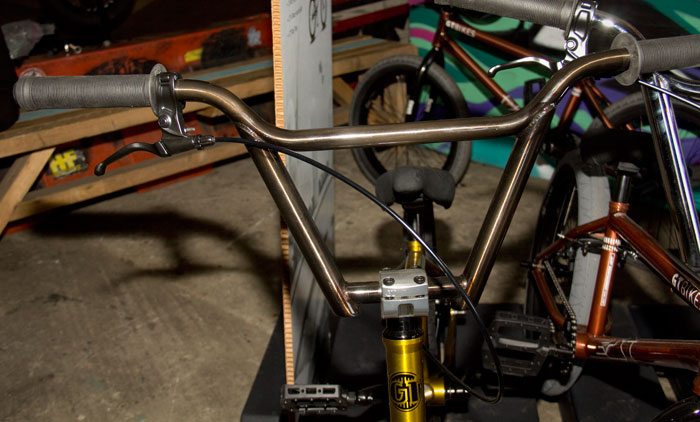 Each of the bikes feature the GT 4-Piece bars. 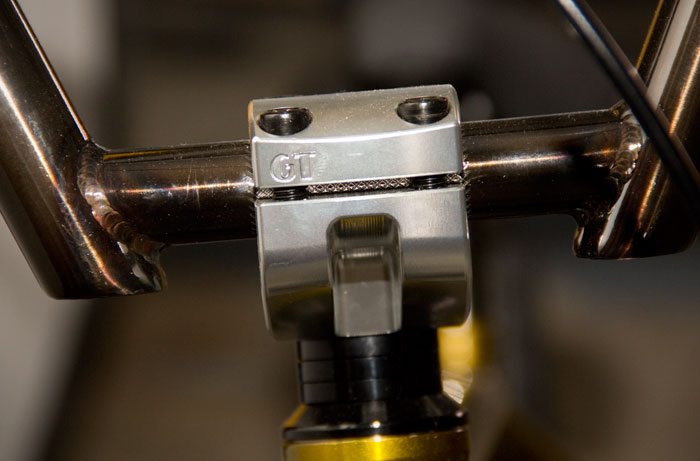 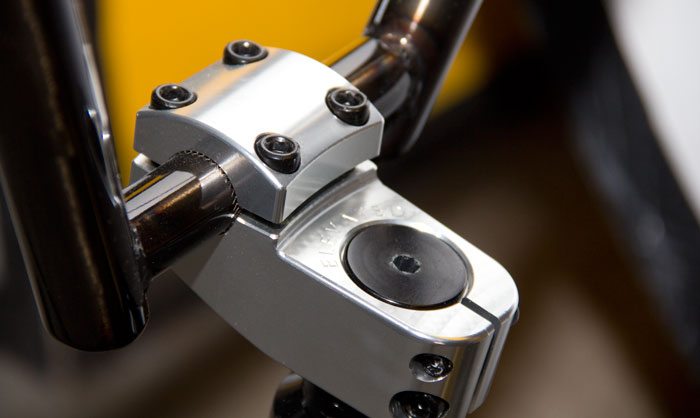 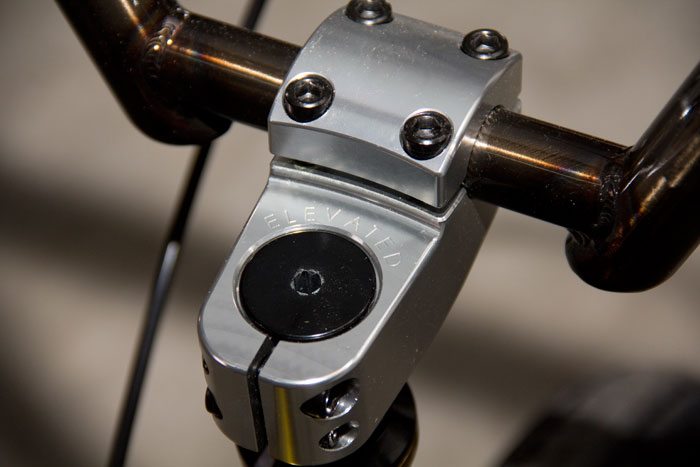 Here’s a look at Brian’s signature Elevated topload stem that will be available aftermarket as well. CNC machined with beveled edges, smooth curves, a rounded back, additional machining for weight saving and engraved logos. 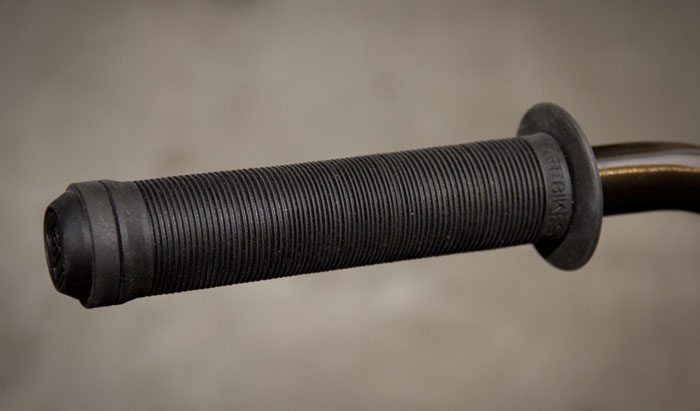 The new GT Team grips use the classic mushroom style with a soft rubber compound. You can find these on all the bikes in the range. 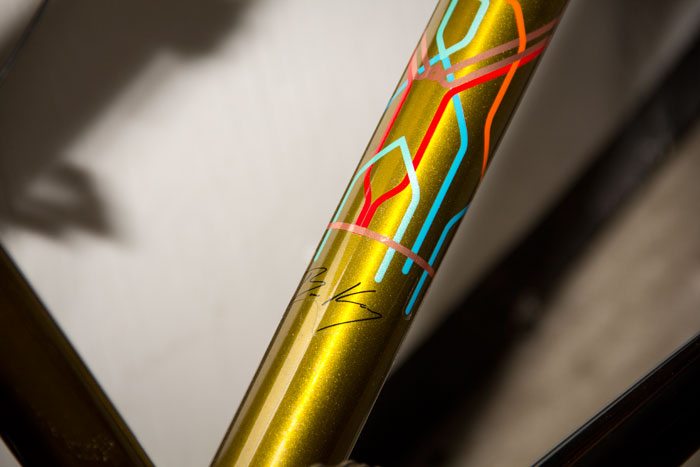 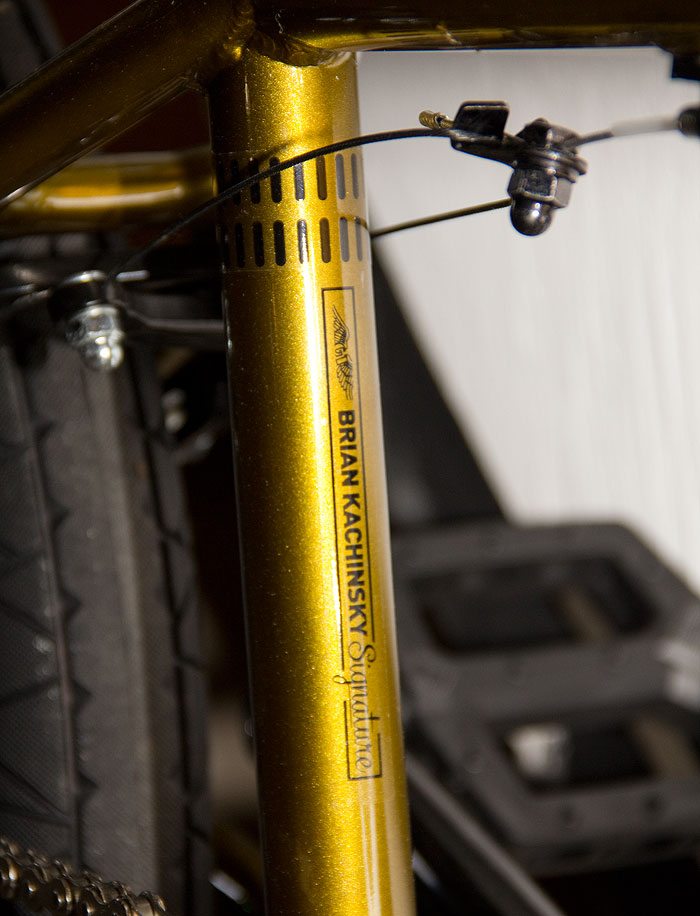 The graphics on the bike are based off the transit maps of Chicago. The seat tube features a crosswalk style design as well. 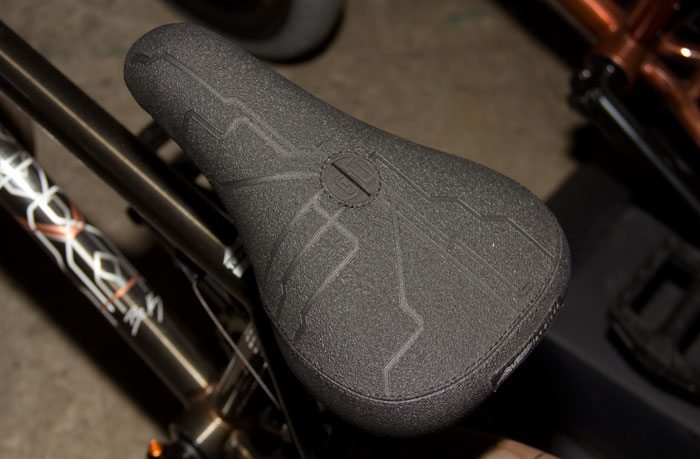 The seat also features the same style design which is a nice personal touch since Brian takes a lot of pride in Chicago where he calls home. 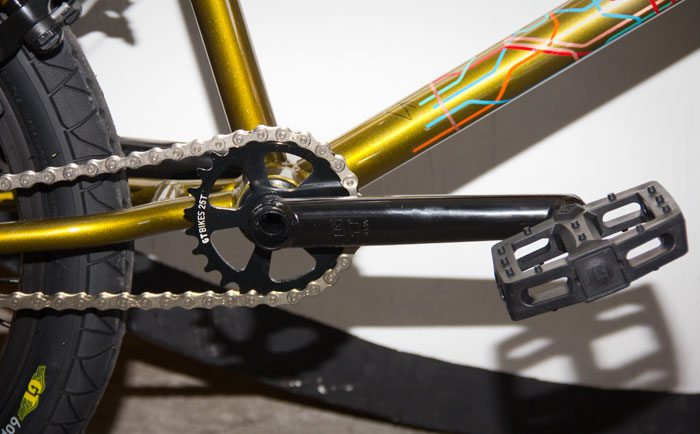 GT have some 2-piece cranks that can be found on the higher end bikes, which look real clean. 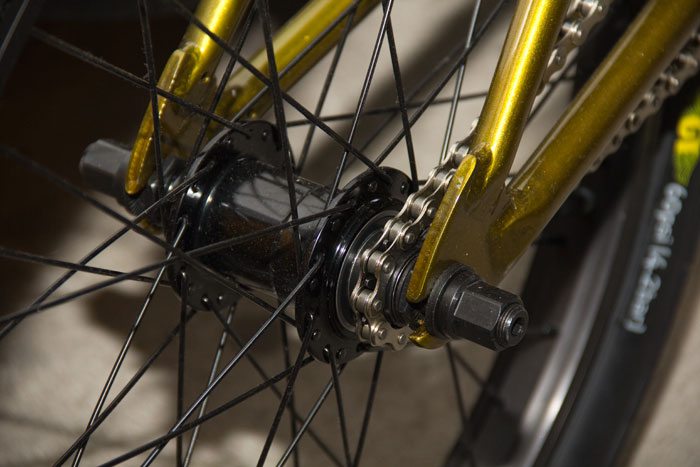 Brian’s Signature Series bike comes with a 9-tooth sealed freecoaster hub. The hub is based off the tried and true KHE system. 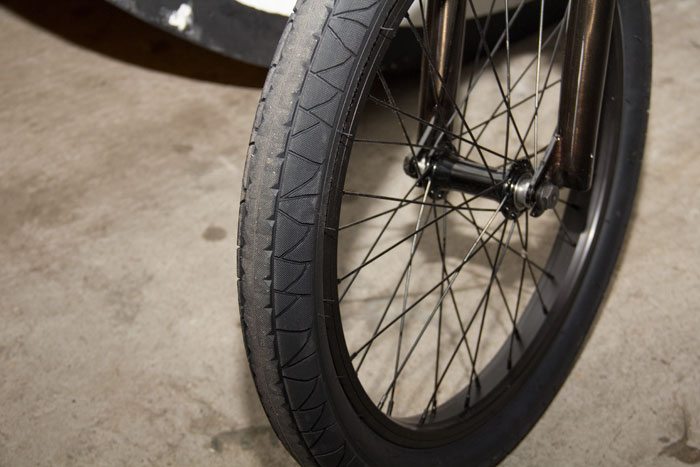 You can find GT’s classic, but modernized Pool tires on the bikes as well. 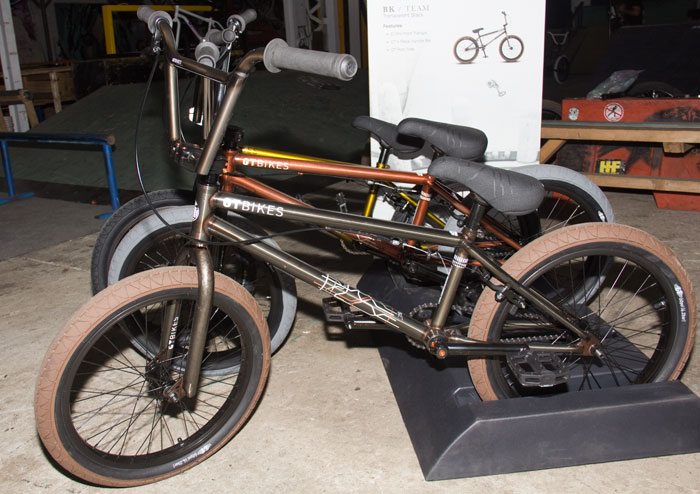 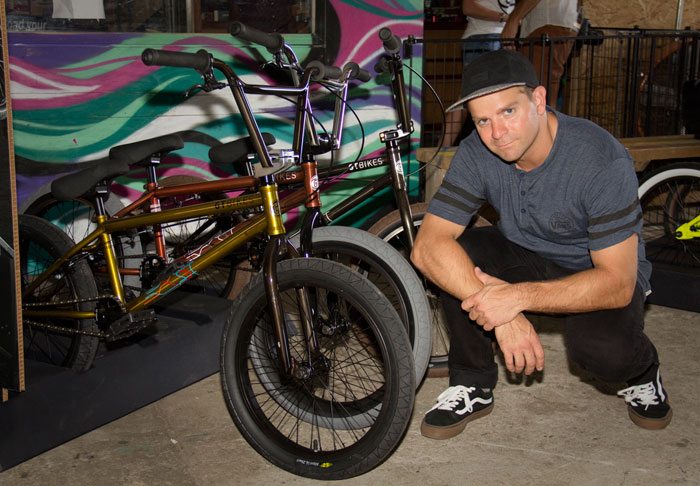 Believe it or not, but Brian didn’t see the final bikes in person until the event, so you could see how blown away he was when he saw months of bouncing ideas and concept designs back and forth with designer and team manager, Ben Ward, in person finally.

Overall, we were really impressed with the bikes for Brian’s line. There are a lot of details that definitely make it a signature complete beyond just a colorway or something simple we find on other signature bikes out there. 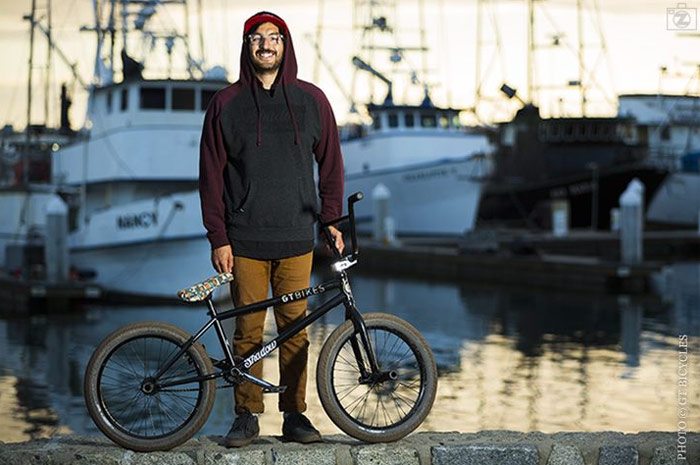 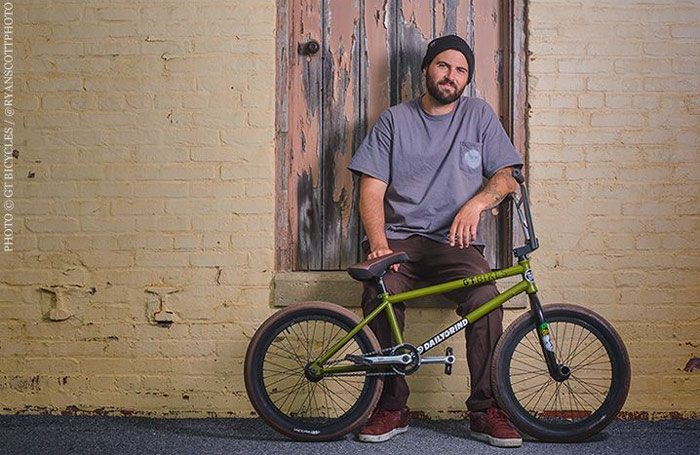 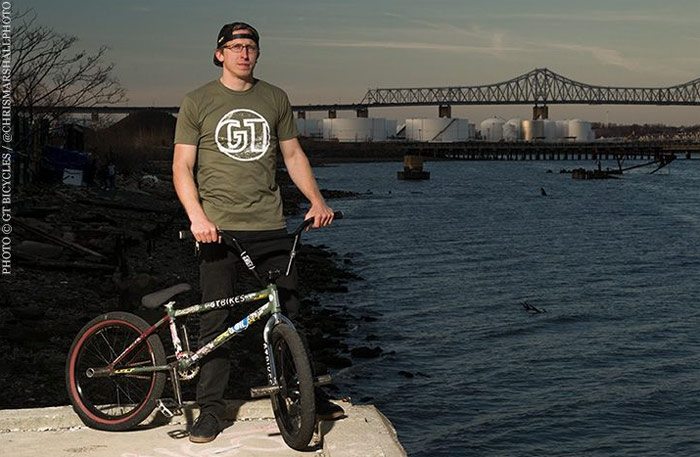 END_OF_DOCUMENT_TOKEN_TO_BE_REPLACED

The LFS crew coming through with another round of extras from their 2nd full-length video! Here’s a quick look at a few of Jeff with Glasses‘ section! Plenty of grinds and unique setups in this one!

“LFS2 Leftovers:
Despite going to college to be a scientist (or whatever), JWG still managed to go in for his LFS2 Section. Here are the few clips that didn’t make it into his banger part of the video.
Edit by Mikey Almodovar
DVD available at LFSBMX.BIGCARTEL.COM”

END_OF_DOCUMENT_TOKEN_TO_BE_REPLACED 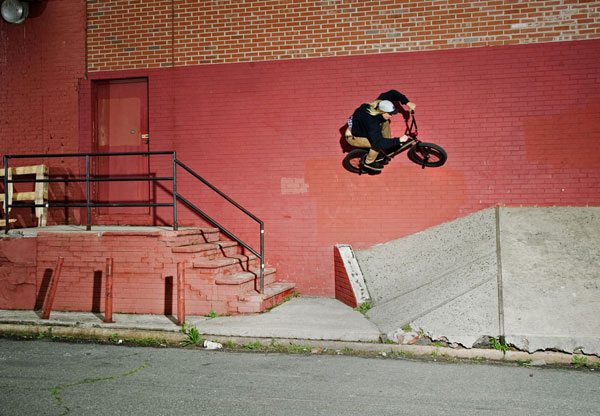 We’re always stoked when we have a bunch of new photos submitted. We’re especially psyched when Chris Marshall drops us a look at some of his latest work! Chris has been super busy working the east coast streets shooting photos and ended up with a handful of dialed new shots featuring the likes of Zack Gerber, Ryan Niranonta, Jeff With Glasses, Mikey “Smallfry” Almodovar, Vin Crispino, Geoff Meade, Jake Coulson, Ryan Wright, Steve Jones and Jeff Kocsis! Hit the the link below for the full photogallery!

Check out the FULL photogallery here!