Ever wondered what it would be like to cruise around with some of the Wethepeople team while they’re out on a filming mission? Well, you’re in luck because they strapped a GoPro on Moritz Nussbaumer for a day of filming around Barcelona! Hit play to take it all in from breakfast, to some of the spots they cruised, fireworks, more riding and good times!

“While filming for FOUNDATION, a new WTP video project; Mo Nussbaumer hit the GoPro for the day. So here’s what it’s like to be on board with Mo for a day in the streets of Barcelona with Jordan Godwin, Ed Zunda and Felix Prangenberg.”

END_OF_DOCUMENT_TOKEN_TO_BE_REPLACED 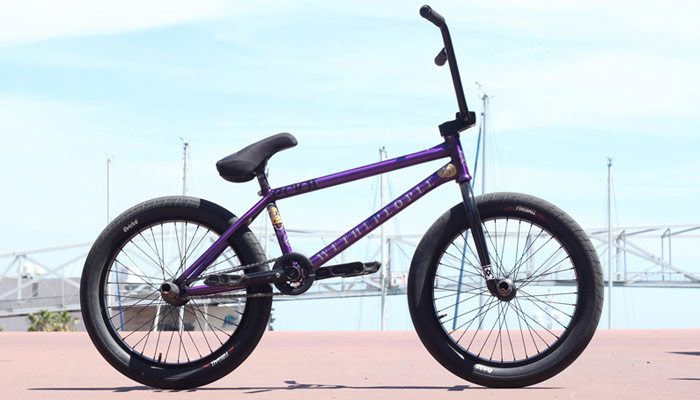 There’s a fresh new Bike Check up on the Wethepeople website giving you a closer look at Jordan Godwin‘s brand new Battleship setup that he’s running. The Battleship is still in the prototype stages, but we would imagine with them starting to put it out to public that it’s not too far out from production. The frame is their new team frame that is designed to take a beating out on the streets. You can check out a ton of photos of Jordan’s bike, get a full parts list and a little insight into the new frame here — Jordan Godwin Bike Check

END_OF_DOCUMENT_TOKEN_TO_BE_REPLACED

Some of the Wethepeople crew recently loaded up for a trip on over to France to meet up with some of the Frenchy’s Distribution crew for a trip through a few of the country’s cities to see what they had to offer for spots. Here’s a look at the clips they stacked during their visit! Real solid!

“Wethepeople’s Felix Prangenberg, Ed Zunda, Jordan Godwin, Mike Curley and Frenchy’s Robin Bourhis and Theo Zannettacci took to the roads of France for a week of roadtripping and the odd shop stop, passing through Lyon, Marseille, Geneva and Montpellier. See what went down here…

Here’s a fresh one featuring Jordan Godwin and Pete Sawyer teaming up for a session at the M32 DIY spot over in the U.K! As expected, they put their pegs and freecoasters to heavy use cooking up some real dialed lines. Take a look!

“There’s nothing better than creating something with your own hands and then riding it for the first time. DIY really is best. Wethepeople’s Jordan Godwin and Pete Sawyer weren’t around for the creation of this DIY beast located under the M32 bridge in Bristol, UK but luckily it’s open for all to ride so they snagged Callum Earnshaw to come film this short but sweet video.

Some of the Wethepeople team over in the U.K decided it was a good time to get together and make a trip to the brand new Source Park in Hastings, England for a session. With a park that offers so many different options from bowls to rails, ledges, quarters, banks and more, you know these guys had no trouble stacking clip after clips of pure gold. Hit play and take it all in!

“The new subterranean Source Park​ in Hastings, UK has created quite the stir since it’s grand opening in February so Wethepeople​’s Pete Sawyer, Mike Curley, Jordan Godwin and Jordan Waters cured their curiosity with no cats being killed in the process, just every inch of the new Source setup. The whole crew get some fiery clips but Mike Curley and Jordan Godwin really take the biscuit… so dialled.” – DIG

END_OF_DOCUMENT_TOKEN_TO_BE_REPLACED

Wow! Check out this serious banger of a BMX video that Wethepeople just released featuring Jordan Godwin absolutely crushing it in spots Wales! This is packed with some amazing riding and super clean film work. You will not be disappointed by this one!

Filmed and Edited by Nick Wotton

END_OF_DOCUMENT_TOKEN_TO_BE_REPLACED

Some of the Wethepeople team recently took a trip to Sicily to see just what the place had to offer! Although it doesn’t sound like the place had a ton to offer for spots, the entire crew were able to crush every spot they did come across and ended up with this dialed BMX video! Check the highlights above!

“Sometimes you make a gamble and it pays off. Sometimes it doesn’t. Wethepeople’s Mike Curley, Ed Zunda, Jordan Godwin, and Mo Nussbaumer had seen the Italian island of Sicily pop up in quite a few skateboarding videos recently so in January they decided to see what the island had to offer for two wheels. Well, it didn’t go quite to plan – spots were minimal and the guys spent almost every evening on google maps and skate apps trying to find things, at one point Mo got excited because he found a manny pad… it was definitely slim pickings. Every day was spent searching and for such a battle the video actually worked out really well! Curley comes through with some of that signature tech, Mo with the grind tailwhip game on point, Godwin with a juicy old hard 3 and more… and Zunda with that effortless control. Good job lads!