TJ Lavin made the trip over to the U.K to spend some time with Stephen Murray…

TJ Lavin coming through with a fresh round of Hangin’ with Lavs. This time around is a special one because he took a trip over to the U.K to spend some time with Stephen Murray to discuss the accident a bit, catching up with what’s new with him, how he’s staying motivated and much more. Always stoked to get an update from Stephen on what’s new!

“My brother from the UK took the world of BMX by storm. Stephen Murray WAS the man to beat and had some of the best style. Mixed with the biggest tricks in the business he won several of the biggest contests in history.” – TJ Lavin

Stephen Murray tells his story to the Unilad crew…

Above is a bio video that Unilad put together learning about Stephen Murray‘s life as a professional rider, his accident that left him paralyzed and what his life is like for him now! Check it out!

The next episode in the Stephen Murray‘s “Staying Strong” autobiography series continues. This time around we get some words from Stay Strong team riders Jordan Aleppo, Bob Manchester and Ben Wallace on how they became apart of the team and how influential Stephen has been to them and BMX as a whole. Check it!

“With Stephen Murray’s autobiography ‘STAYING STRONG’ release on 22nd June 2017, we caught up with some members of the BMX team. They tell us how much respect they have for Stephen, what kind of things they’re expecting in the book, and consider the impact it might have on the BMX world…

The next installment of the Stephen Murray “Staying Strong” autobiography series has arrived. This time around Stephen talks a little bit about the future for himself and Stay Strong as a brand.

“ Learn about what Stephen holds dear to him as we look forward. From helping others who need advice and making the best opportunities for his kids, to growing the Stay Strong brand, how stoked he is on Larry Edgar and working with Wings For Life.

The 5th installment of the “Staying Strong” series for Stephen Murray‘s autobiography has arrived. This time Stephen loads up and makes his way to Corby Skatepark to enjoy a session with his kids and friends. Take a look at what went down!

“We join Stephen Murray for a day as he heads out to Adrenaline Alley skatepark in Corby, UK, to watch his sons shred with some of the Stay Strong crew.

The 3rd part of Stephen Murray‘s “Staying Strong” Autobiography takes a look at the Double Backflip, which was ultimately the trick that caused the accident that left him paralyzed. In this video, Stephen talks about the trick and what got him started with it and what it took to get it done…

Week 3: Stephen reflects on the double backflip, the trick that would make and break his career.

Part 2 of the Stephen Murray “Staying Strong” 10-part Autobiography has arrived. In part 2 we get the story of how he got into BMX, coming back from flatlining 3 times after his crash, how Stay Strong came about and a few inspirational words.

If you missed it, here is Staying Strong – Part 1

Week 2: Stephen talks us through his introduction to BMX, how he moved into dirt jumping, and the birth of Stay Strong.
—

With 2017 being 10 years since Stephen Murray‘s crash that left him paralyzed and unable to ride. Ride UK have been busy putting together this Autobiography series with Stephen that’ll cover A LOT of ground. Here’s the first part of 10 that talks about Stephen being at a serious high point in his career before the accident, winning $100,000 in a month from contests. It leaves off right where things took a turn for the worst in Baltimore. Get ready for part 2 next week.

Week 1: From early contest highlights to the crash in 2007, Stephen talks us through it. 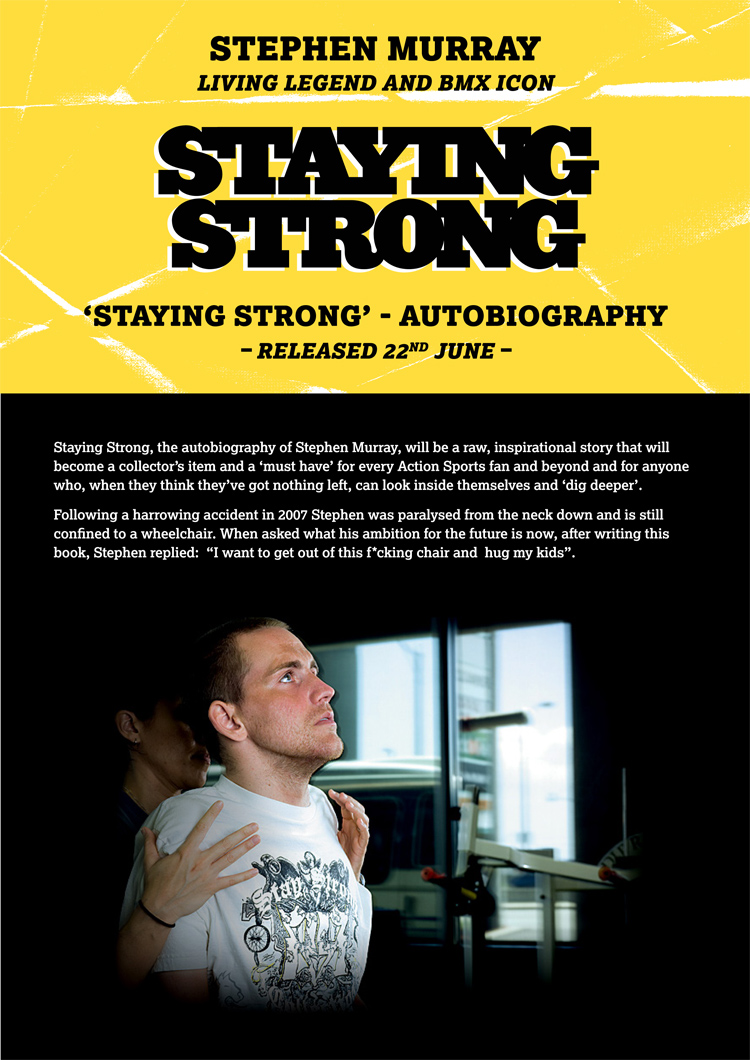 Staying Strong is released on 22nd June, 10 years after his crash.

“Staying Strong details Stephen Murray’s life and rise to fame as a professional BMX athlete, moving to California to pursue and live the action sports dream until his life-changing accident in 2007 where he was paralysed from the neck down.”

At the peak of his career, Stephen was known for leading a rather colourful lifestyle. Expect some truly savage stories in the book – he didn’t hold anything back.”