Stranger coming through with a fresh mix featuring the crew out cruising spots in California. This has a pretty chill vibe, but with a crew like this, you know the riding is on point. Take a look!

*Created by Stephan August for Stranger” 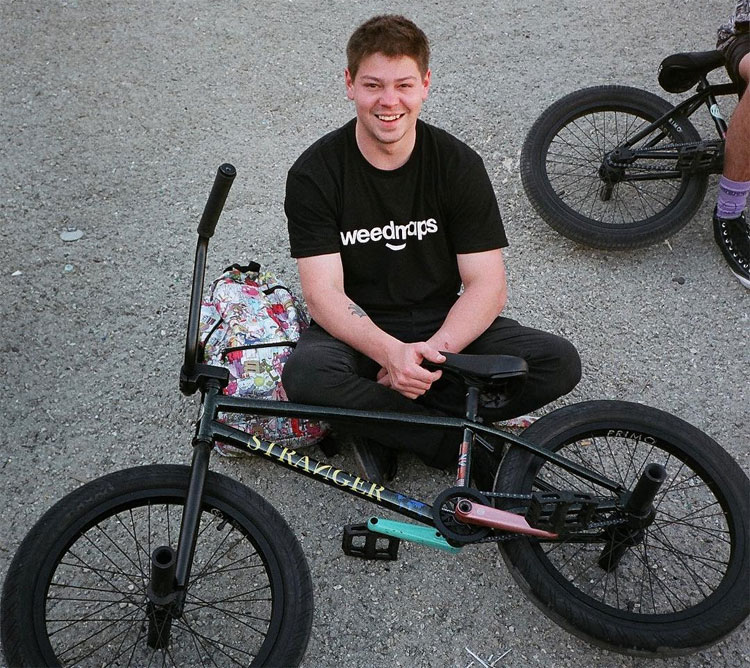 Here’s some sponsor for you! It looks like Stevie Churchill has parted ways with Federal Bikes to ride for Stranger! This isn’t a complete shock since we always did see the possibility of Stevie riding for Stranger since he’s on the Primo Pro team as well and spends time with Rich Hirsch pretty regularly.

We’ve been seeing the Stranger team getting pretty stacked as of late, so we can only imagine having Stevie on the team will only push things even further. Expect to see plenty from Stevie and Stranger in 2019!

What do you think about the news? Stoked? Bummed? Did you see it coming? Let us know in the comments below!

It’s always pretty wild to think about how much footage may have never been used or seen over the years. There’s probably a ton of insane clips that we will never see because of it. Today, we came across this raw cut of clips Jeff DuPaul was sitting on for more than a few years now of Stevie Churchill. We’re not sure why the clips were never released or why he chose to upload them now, but we’re glad he did! It looks like these clips span back to his days on Volume. This is a good reminder that Stevie is NOT scared to send some really big barspins on some real big drops. Take a look!

The latest F-LOG from Fit Bike Co. has arrived. This time around the crew takes Yumi Tsukuda out pants shopping before heading out to cruise a few spots. Here’s a look at what the guys got into during the day in this raw cut. It looks like it was a solid day out to us.

“Yumi’s stay in America is almost at its end and every year he loves to take advantage of the thrift stores over here. Particularly for the inexpensive oversized slacks. After securing some Yumi swag we venture out to ride some mall spots and more…

Here’s the latest interview in The Gully Booth! This time around Tony Malouf sits down with Stevie Churchill for an interview talking about everything from how he got into BMX and went on to riding Pro, traveling, riding contests, living in California and more. Stevie covers a lot of ground and you definitely get to know him better. Check it!

“This time we have Stevie Churchill in the Gully Booth. We discuss his rise as a young rider, X-games, Dew Tour, His recent move to Long Beach and the Ghost of Shabbs.” – The Gully Factory

Here’s a new Lost It edit from Federal Bikes for their new FTS video. This is a mix of clips that won’t be making the cut for the final video and a bunch of laughs and behind the scenes that went on while the crew was filming. Take a look at what Dan Lacey, Stevie Churchill, Bruno Hoffmann, Anthony Perrin, James Cunningham and Joe Jarvis have been getting into!

“Federal bikes are currently working on a full length video project called FTS and during the course of filming will be releasing the LOST IT Volumes giving an insight into the progress of FTS.

Watch LOST IT vol 1 at the link below.

Rich Hirsch caught up with Stevie Churchill for a day of fixing up his bike and some riding time.

Here’s a new video Rich Hirsch put together from a day he spent with Stevie Churchill. This video starts out with a trip to Tip Plus to dial Stevie’s bike back in, then they head to the skatepark to stack some clips! Check out what went down!

“A day with Stevie Churchill is always a good one. Andy Garcia killed it all day and Phil got a clip and even helped me get one.” – Rich Hirsch

The Federal Bikes team have been busy going to work on their new “FTS” video and they’ve had some extra footage. Instead of letting it go to waste, they put together a video showing how things went down in Philadelphia. This isn’t your typical raw cut, behind the scenes scrap video… This is a well filmed and edited video that gives us a look at what the team experienced, along with some riding footage that won’t be making the cut for the final video, during their stay in Philadelphia. Check out riding and footage from Dan Lacey, Bruno Hoffmann, Anthony Perrin, Stevie Churchill, Ryan Eles, James Cunningham and Michal Smelko from the lens of Rich Forne! We’re already pumped to see the “FTS” video!

“Federal Bikes are currently working on a full length video project with Rich Forne called “FTS” and will be releasing a series of short videos called “Lost it” showcasing behind the scenes footage.

This is Volume 1 and was filmed during a team trip to Philadelphia.” – Federal Bikes