This is amazing! Taj Mihelich has put his amazing illustrating talent together to tell the story of Paul Buchanan doing the legendary Church Gap in Austin, Texas. The story is told by Sandy Carson, and it’s just shy of five minutes of the crazy story of how Paul did the insane gap without any cameras to document it because he just sent it! Talk about a legend.

“Sandy Carson tells the Legend of Paul Buchanan and the Church Gap.

The past week or so we’ve been getting the individual sections from the Primo “Made In Taiwan” video courtesy of Snakebite. Now the full 24 minute video is now online for your viewing pleasure! This BMX video was originally released in 1998 an is completely STACKED with legends. You won’t want to miss this one.

It’s safe to say 1998 was a really good year for Primo from a team standpoint. They had an absolutely STACKED squad of legends. Here’s the mix section from their “Made In Taiwan” video that features Taj Mihelich, Nate Hansen, Robbie Morales, Chad Degroot, John Parker, Joe Rich, Brian Castillo and Josh Heino! Ramps, street and trails all packed into this one making for a damn good watch! What’s crazy to think about is that 5 of these guys went on to make their own brands; Terrible One, Cult, Volume / Demolition and Deco. Hit play and take is some classic BMX goodness!

Snakebite is always digging up the classics. Here’s Taj Mihelich‘s section from the Primo “Made In Taiwan” video that was originally released back in 1998. This section is packed with trails, park and street footage with Taj’s signature style. Needless to say, even after all these years this section still kicks a ton of ass! Hit play and enjoy this one! 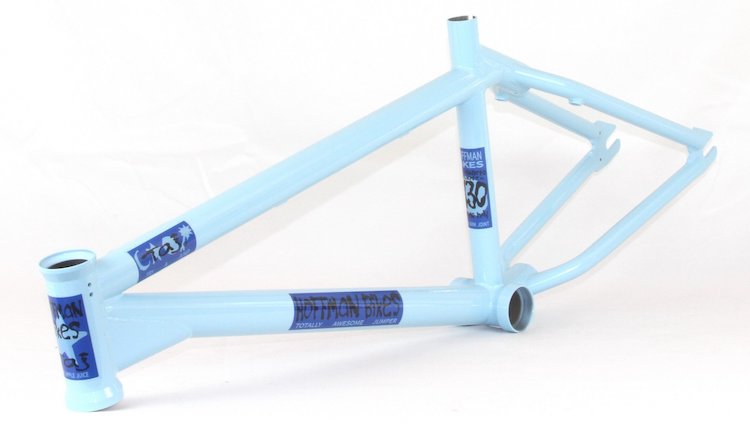 Hoffman Bikes are celebrating their 30th anniversary this year, and they’re starting to show off some special edition releases that they have in the works! Here’s a look at the Taj Mihelich signature TAJ Frame Re-Issue that will be available in October! Check out the details below!

END_OF_DOCUMENT_TOKEN_TO_BE_REPLACED

Whenver you see Taj Miheliich and Jay Miron‘s name pop up in the same title, especially these days, you know you’re in for a treat! Here’s a new video series Taj is starting where he tells some stories with his illustrations called Amazing Moments In Bicycle History. This first one is a story about a time when Jay Miron made an attempt to do a trick for Taj on vert and was fully committed. Ultimately the trick ended in disaster, but that was beside the point! Hit play to watch and listen to Taj’s story about the Canadian Beast!

“I have been blessed to ride with a number of the world’s most amazing bike riders. They tend to have very different takes on riding and what they are trying to accomplish. One thing they seem to have in common is a drive to test their resolve. Their skills have reached such a high level that I think the real challenge for them is being able to follow through with what their mind knows they are capable of. Their ability to clear their minds of fear and self-doubt allow them to consistently perform at a level the rest of us might only touch once in a blue moon. It isn’t just some gift they are born with, they work for it, and they work hard. When there’s something they want to do and the voice inside tells them that they can (probably) do it, they focus everything on making it happen. The legendary Jay Miron stand’s above the rest at this skill and so this silly cartoon is intended to be a tribute to his determination and something we can all hopefully find inspiration in.” – Taj Mihelich 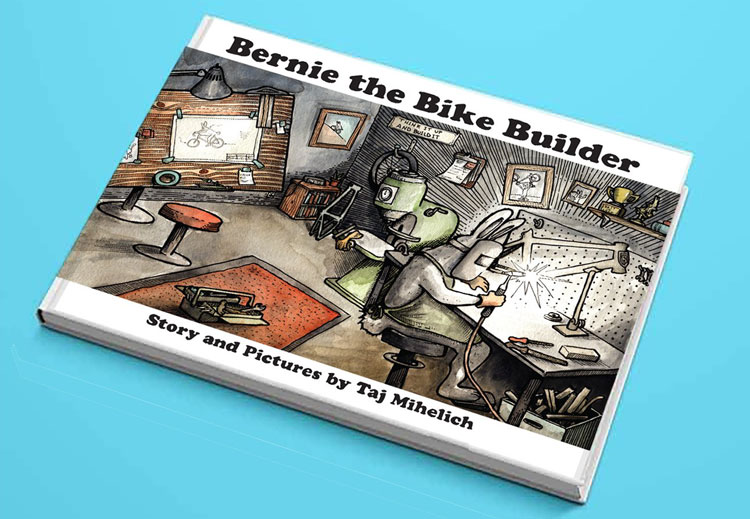 As many of you may have heard by now, Taj Mihelich has released a new book called “Bernie The Bike Builder” that he wrote and illustrated! The book focuses on Bernie the rabbit and Monty the dog who build bikes for their friends to ride and have fun on. If you have followed Taj’s Instagram, you will know his drawings always have a story and humor behind them, making this a great book for the kids and for the adult bike lover. This isn’t focused directly on BMX, but it definitely appears to have plenty of BMX influence. The book originally sold out on Taj’s Big Cartel page, but it looks like it’s now available in Hardcover and Paperback styles on Amazon now for $22.35 (Hardcover) and $17.50 (Paperback). If you were hoping to get a copy of the book, definitely get on this! We haven’t had a chance to check it out yet ourselves, but we’ve been hearing nothing but good things about it! You know if Taj had his hand at it, that it’s going to be awesome and well worth the money!

“Bernie is a master bike builder. The bikes he designs and builds are sought after by bike racers all over the world. However, none of his close friends seem interested in riding bikes. After a discussion with Monty the Corgi he realizes that his friends think they can’t ride bicycles because no bikes fit them. Bernie takes on the challenge to build his motely crew of pals custom bikes that they can ride. It takes all of his creativity and skills to design and build special bikes for T-rex, Bat, Shark and more!”

“In tight circles around a broad range of cycling subcultures old and new, BMX innovator, artist, animal lover and entrepreneur Taj Mihelich is a legend. A shy, clever, self-deprecating legend.

As a rider, Taj’s influence on ramp, street and trail riding still resonates three decades after he burst onto the BMX scene.

As an entrepreneur, Taj’s thoughtful, slightly irreverent perspective on the fun and freedom of riding a bicycle has inspired an army of smiling cyclers to follow his tire tracks worldwide.

“Bernie the Bike Builder” is the brightest peek yet into the colorful world of Taj Mihelich’s busy mind. Whimsically written and vividly illustrated by the life-long lover of all things two-wheeled, Taj’s first book follows an industrious rabbit and his Corgi pal Monty as the unlikely pair craft custom bicycles for a curious band of animal friends.

A sublime allegory about creatures and dreams big and small, “Bernie the Bike Builder” packs Seussian levels of heart and light into a story for all ages. Where the animals in Taj’s head dream of going might surprise you. How they get there will blow your mind.” – Harold McGruther

Check out more details over on Amazon.