Beast and Tom Stretton get it done for some new Mad Monday videos that they will be doing. Take a peek.

Tom Stretton has been killing it lately. If you have been able to see the new Colony video, you are more than aware of why everyone who has seen the video is psyched on his part. Tom was recently bumped up to the pro team for Colony as weel, so I figured he had a fresh new bike to work with. Let’s take a look at what he’s riding these days along with a few photos and videos.

Colony didn’t put the cameras down once the video was done. They will be dropping a new series called Ten Clips that is explained below. They’re starting off with Tom Stretton who had my personal favorite section from the DVD and I think his unique clips in this will give you an idea. Check out the DVD!

“After working hard on filming for the Colony DVD, we wanted to play around with a web edit series that was a bit more relaxed, so the deal is…. The rider picks out a spot or park they enjoy riding and then they film ten clips at that spot. No pressure, just keep it fun and do the things they enjoy doing.

This is Tom’s local park so I knew this would be the place we would hit up for his Ten Clips. To mix it up and to work in with Tom’s work schedule, we got out the generator and filmed it at night whilst the local kids lurked in the background.

We moved the generator set-up around to each part of the park to film each clip which worked well.

Over the course of the last two years, the Colony team have been traveling the world filming. They kept it all pretty hush-hush until recently for the majority of BMX which is actually pretty hard these days. When it was announced they were dropping a full-length, people seemed to be pretty excited and with the team they have these days, it’s no wonder. Colony had Sidewall send me over an advanced copy of the video to check out along with FIVE copies to GIVEAWAY. All you have to do is “Like” The Union on Facebook and then comment or like the photo of the cover I’ll have posted on the wall and I’ll pick the winners next week. This is what I thought of the video…
END_OF_DOCUMENT_TOKEN_TO_BE_REPLACED

Next up for Colony week over on The Come Up features Tom Stretton. Hit this Link to check out his interview. Word on the street is his part in the Colony video is absolutely amazing. 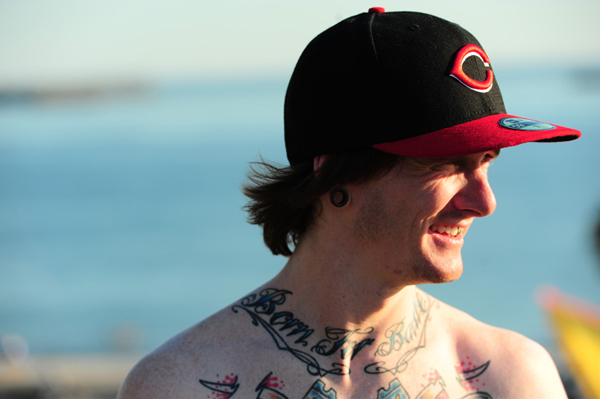 “I am very proud to announce that from today, Tom Stretton has earned himself a spot on the pro team with his efforts on the DVD & generally just being a kick ass guy. Thanks for all your work mate, it’s a pleasure to have you on the team & you’re such an important part of Colony.” – Clint Millar