Check out the new Vapour tire!

Eclat have released their new Vapour tire that is designed with trails riders in mind. Here’s a quick video where Tyson Jones-Peni gives you some details and a look at the tire. You can check out more details below as well!

“A modern take on the classic “dirt tire”, we’ve been working closely with Tyson Jones-Peni, Dylan Lewis and other roasters on the team on a new éclat tire which rolls smooth on the trails and runs fast in the bowl.

The #VAPOUR tire is available now in 2.40″ (63mm) and 2.25″ (57mm). 100psi rated and with Cobweb technology for superior strength. Utilizing a special race-spec rubber compound, a fast-rolling center section and a unique multi-textured tread pattern for superior grip on all surfaces, the Vapour Tire fiends for the dirt and cement.” – Eclat
END_OF_DOCUMENT_TOKEN_TO_BE_REPLACED

Get a look at Tyson Jones-Peni’s signature setup! Yeah, those are disc brakes!

There’s a lot of times a Bike Check will pop up, and they will look super dialed, but there isn’t anything that makes it unique. Well, Tyson Jones-Peni caught our eye with his new video Bike Check from Back Bone BMX! Tyson has been working with Wethepeople and Eclat on a few signature parts, one being his signature Chaos frame. That frame isn’t just some geometry, graphics and colors that Tyson picked, but Tyson managed to get himself DISC BRAKE MOUNTS on his frame. We’re pretty sure this is the first signature frame with disc brakes for a freestyle frame, but we could be wrong. Either way, it’s unique and pretty rad if we may say! Hit play to let Tyson give you the run through!

“Tyson Jones-Peni has been working with @Wethepeople BMX on his signature frame soon after joining the WTP team in 2020.. and it’s finally here, as well as his signature @Eclat BMX Exile seat.

Tyson built it up and took it straight to the park for first laps, then gives his thoughts on his brand new ride.. the Wethepeople Chaos Machine.

Tyson wanted to bring the disc brake feel to his signature frame and Wethepeople made it happen, which he is fairly certain is the first production freestyle frame with a disc mount.. Built for what Tyson likes to ride; the trails and big transition riding.” – Back Bone BMX 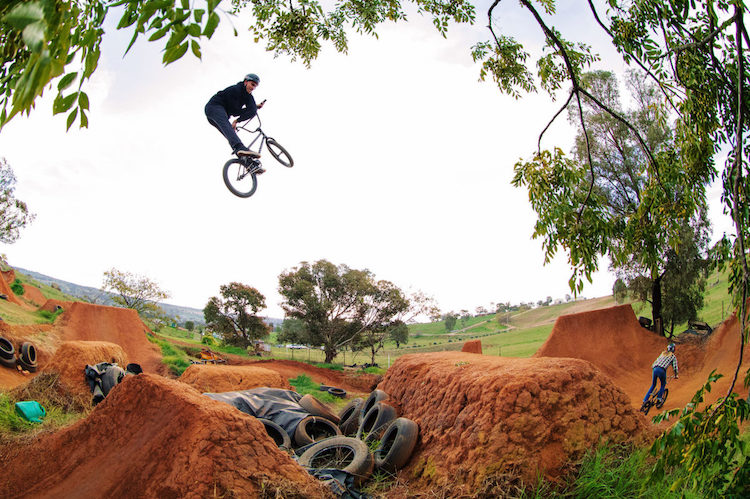 Here’s some more sponsor news for you! After years of riding for United, Tyson Jones-Peni has made the switch over to Wethepeople. There’s a bike check, along with an interview with Tyson about the change, how things are going with Backbone BMX and more over on the DIG Website! It sounds like there’s plenty of good things going on for Tyson these days which is awesome to see.

It’s always a good day when some fresh Tyson Jones-Peni footage pops up online! Here’s his new edit for Back Bone BMX that’s filled with style for miles from trails and cement park sessions! This is a damn good watch from start to finish, so get on that play button and check this out!

“Riding BMX is my ultimate artistic expression, something that is on my mind at all times, that I live and breathe; something that I uncouple the marker of “good” from the basis of skill. It’s why I love to create and love to learn in all avenues of my life.. I am thankful to have learnt so much from BMX and continue to do so everyday.

Thanks to Brendan Boeck and my wife Melissa for helping out a lot with this project, and to United, Vans, Eclat and of course Back Bone BMX, thanks for keeping me rolling. Hope you enjoy.” – Tyson Jones-Peni

Whenever the Back Bone BMX squad down in Australia drop a new video, you know it’s going to kick a whole lotta ass! Here’s a new one from their Summer 2020 Bowls Trip that took the guys to a handful of parks that they proceeded to absolutely crush. If you’re looking for speed, style and a laidback vibe, this is the BMX video for you. No nibbler jibbler ledge grinds in this one. Hit play and take a look! It’s safe to say this trip was a good one!

“The crew hit the road from Canberra up to the Newcastle coast, visiting some epic concrete along the way.


Visit the site for more photos from the trip & as always, to buy BMX goods from the raddest BMX shop in Aus.” – Back Bone BMX

Back Bone BMX coming through with a new mix edit featuring Jason Watts, Tyson Jones-Peni, Perrot, Zac Miner, Chris Kerr, Troy Harradine, Jack O’Reilly, Tom Dugan, Raine Turnbull, Chris Harti and more getting down on trails and parks down in Australia! This has a pretty laid back vibe, but all of these guys bring plenty of style to everything they touch! Hit play and enjoy. You won’t be disappointed!

“We’re always out filming and hanging out, here’s some footage that hasn’t seen the light of day until now.” – Back Bone BMX

The Back Bone BMX squad loaded up for a road trip in West NSW to hit up all the amazing cement bowls at the park and have a damn good time doing it. Here’s a video giving us a look at what Chris Harti, Dylan Lewis, Russell Brindley, Rusty, Tyrone Edwards, Tyson Jones-Peni, Will Gunn and Zac Miner got into along the way! No shortage of style and blasting in this one.

“The crew went out to west NSW for a BMX trip. Nothing beats camping and riding with your mates. Fun concrete times were had.”

The Back Bone BMX crew starting your week off right! They just uploaded Tyson Jones-Peni‘s section from “The Back Bone Video” online for your viewing pleasure. This section is filled with trails, transitions and street clips that kick a whole lotta ass! If you do one thing this morning, make sure it is hitting play on this BMX video!

“Next up with the release is Back Bone co-owner Mr.Tyson Jones-Peni. Tyson’s riding is as powerful and as badass as it gets. He leaves nothing left in the tank and isn’t afraid to try something that he has only thought as possible in his own mind.

A large percentage of these clips are close to first try (which is very lucky considering the gnarly nature of them) and Tyson covers all disciplines of riding in a very well rounded section.

When Tyson’s not working in the store and he’s on his bike, this is an accurate representation of his riding at all times.

Filmed and edited by Brendan Boeck with additional filming from the crew.