The Colony team was in full force at the 2019 BMX Worlds! Hit play to check out what the guys threw down on the dirt jumps and ramps! Real stoked to see Clint Millar out crushing it as always at the contest with his team!

Zozo Kempf has been taking full advantage of the winter sessions.

You can always count on Zozo Kempf to come through with some wild ramp riding. Over the course of the winter, Zozo has been busy stacking clips at a few different skateparks from outside to inside for his latest edit that is packed with some heavy bangers. If you’re looking for whips, barspin combos, technical lip tricks, spins, flips and more… This is definitely for you.

“Music:
No money on my mind – Epidemic Sound

Check out what went down at the 7th stop of the Ride Further Tour!

Here’s a mix of footage from Zozo Kempf, Danny Josa, JB Peytavit and more getting down during the Ride Further Tour in Vienna, Austria. We don’t see a ton of BMX videos out of Austria, but it’s safe to say there’s a decent scene there holding it down. Check out some of the action from a skatepark contest and then as separate mini ramp contest!

“A miniramp right in the center of Vienna, Austria – sounded like a great setup for tour stop #7 presented by JBL & Homme Magazine! Unfortunately the weather wasn’t on our side again so the Cash4Tricks Session at the city’s Streetlife Festival got moved to a nearby indoor skatepark but as soon as it stopped raining the guys went back to the miniramp for a little night session!

Zozo Kempf just released this new video Bike Check giving us a look at his current Colony Sweet Tooth setup decked out top to bottom in Colony and Vocal BMX parts. This isn’t in English, but luckily BMX is pretty universal so you can still get a good idea of just what Zozo is running on his bike from what he says or by what you can see on the bike. It looks like a dialed unit to us! Take a peek!

Zozo Kempf showing you how to properly celebrate a birthday! Here’s a new video giving you a look at what went down during a lights out session on his 20th birthday. Zozo cooked up 10 real dialed combos between the box jump and quarterpipe setup he had to ride, so hit play and enjoy!

“Turned 20 on the 15th of November, so we filmed 10 tricks for an edit, after a knee injury!
Hope you like it, make sure you subscribe to the channel !

Check out this highlight reel from the 2016 Mash EX&HOP Mini Ramp Finals that went down in Munich, Germany! Amazing riding from Mark Webb, Larry Edgar, Sergio Layos, JB Peytavit, Brad Simms, Stefan Lantschner, Zozo Kempf, Daniel Dhers, Kostya Andreev and more! This BMX video has a little bit of everything from technical lip tricks to huge blasting airs and tricks making for a great watch! Needless to say, there was no shortage of amazing riding to see at this one. Hit play and check this BMX video out already!

After you watch the video, check out this PHOTOGALLERY from the contest!

Filmed and edited by Philip Kolsch

END_OF_DOCUMENT_TOKEN_TO_BE_REPLACED

Check out this highlight reel from this years Mash EX&HOP BMX contest that went down in Munich, Germany last week! This BMX video has footage from Daniel Dhers, Brad Simms, Larry Edgar, Mark Webb, Daniel Juchatz, Sergio Layos, Zozo Kempf and more all throwing down. It looks like it was a pretty laid back contest, but plenty of amazing riding to see. Hit play and take it all in.

After you watch the video, check out the PHOTOGALLERY from the contest!

“The first ever EX&HOP BMX edition on the legendary ISPO miniramp in Munich!
4 days of absolute madness in the ramp & at the bar…

END_OF_DOCUMENT_TOKEN_TO_BE_REPLACED 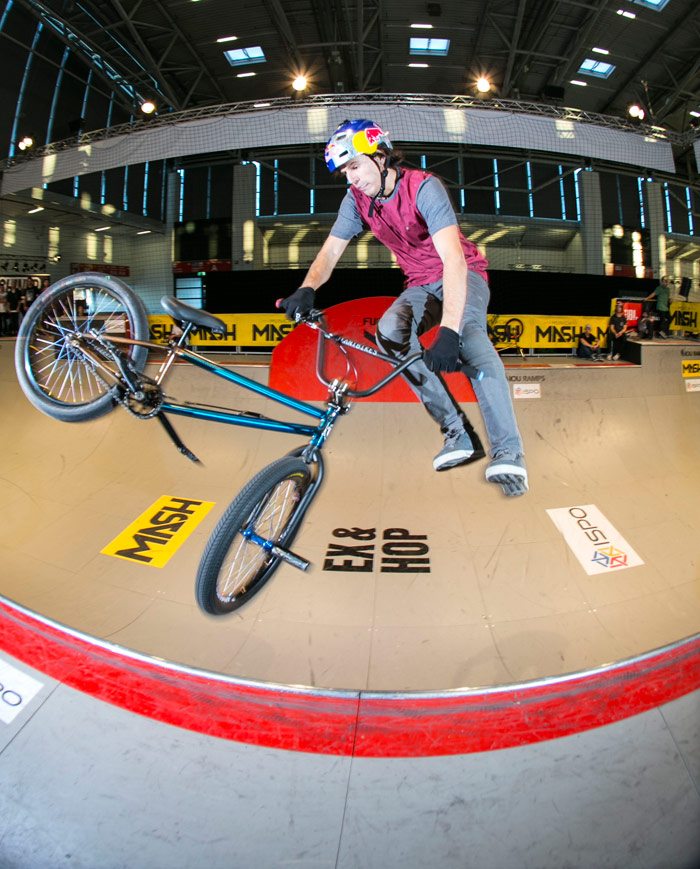 Last week, a few of BMX’s finest made their way to Munich Germany for the Mash EX&HOP mini ramp contest presented by Further. Today, we’re excited to give you a look at a bunch of dialed photos of riders like Daniel Dhers, Brad Simms, Larry Edgar, Mark Webb, Daniel Juchatz, Sergio Layos, Zozo Kempf and more by photographer Fabio Craco! Hit the link below to take a look!