During a Kink Road Trip in New Mexico, Chris Doyle collapsed and was hospitalized…

Last week Chris Doyle was rushed to the hospital after collapsing during a Kink BMX trip in New Mexico. The exact cause hasn’t been announced, but they did say that it wasn’t BMX related. The good news is he is doing well and stable, so it’s likely we’ll see him up and moving in the near future once again. We’ll keep you posted when more details are announced. Until then, get a statement from Kink below…

“On Thursday, April 5th Chris Doyle was hospitalized, after suffering a serious non-BMX related medical emergency in Albuquerque, New Mexico. The situation was life threatening, and Chris was treated almost immediately. He is now doing extremely well, and stable. Things are looking very positive, and he is proving to be stronger and more badass than we could have imagined. With respect to Chris and his family; details and further information will come at a different moment. Thank you for the support for Chris, and keep the positive vibes flowing his way! @chris_doyle22 #kinkbmx #bmx#thelegendgrows”

Kink dropped a short but sweet promo featuring their team going to work!

Check out one minute of footage from Casey Starling, Sean Sexton, Calvin Kosovich, Chris Doyle, Nathan Williams, Dan Coller and Travis Hughes in this new promo video from Kink! Some of these clips you may have seen, others you may have not. Either way, Darryl Tocco made this one look damn good.

“Subscribe to Kink BMX here on Youtube, and on iTunes for the latest features from trip videos, rider sections, product videos, DVD releases, and more!

If there’s one guy we always get stoked to learn more about, it’s Chris Doyle. The BMX In Our Blood podcast recently caught up with Chris at The Wheel Mill to talk about a ton of stuff from how he got into BMX, transitioning into Pro, traveling, building trails, life after pro with a possible career in Real Estate, doing commentary for the X Games, Simple Session and more, balancing dad life with riding and a ton of other topics. This is an hour and 43 minutes long and it’s a great listen from start to finish, so hit play, kick back and listen in!

“Chris Doyle, the consummate professional with the friendliness of an old friend. I have to admit, this one intimated me a bit because Chris is so well spoken and experienced…and I’m not! Ultimately, Chris’s demeanor made the interview flow so well. Chris has an amazing memory and articulated his experiences so well. I’m positive you will all love this one. As always, support the companies that support our BMX riders such as these that sponsor Chris Doyle. Find Chris on IG at @chris_doyle22” – The BMX In Our Blood 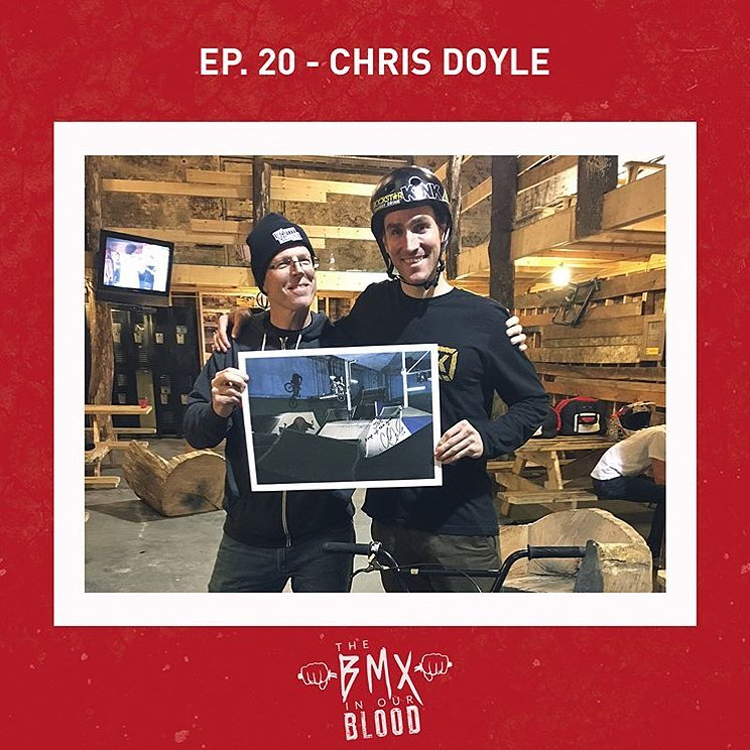 The guys decided to see who could make it through The Wheel Mill pump track the fastest!

If you caught yesterdays video that Scotty Cranmer uploaded from a session the guys got in at The Wheel Mill, then you knew the guys were going to have a time trial on the pump track to see who is the fastest. Check out the video to see if anyone could beat Chris Doyle‘s time.

“At The Wheel Mill bike park we decided to have a race around the pump track while using the laser timing system! We met up with some of the local BMX riders including my old friend and fellow professional BMX rider Chris Doyle! Each rider had one chance to get there fastest lap around the track and it came down to the wire to decide the winner! Only one rider became the pump track race champion!” – Scotty Cranmer

Now this is a proper way to spend a birthday! The other day Scotty Cranmer and crew made the trip to The Wheel Mill in Pittsburgh to spend a day riding with the one and only Chris Doyle to celebrate Scotty’s birthday. Hit play to see what went down as the guys rode! Plenty of trains and good times in this one.

“My Birthday was on the 11th and the boys and I went to have a session at the wheel mill one of my favorite skateparks and we all had so much fun! This skate park is absolutely amazing there are so many ramps in this place and the box jump room is absolutely amazing! We met up with one of my favorite riders the legendary Chris Doyle and Cory got to do a turn down with Chris which is been a lifelong dream for him! Thanks for all your B DAY wishes on Instagram and hope you guys enjoy this video!” – Scotty Cranmer

The 12 Days of Aitken continues. This time around we get a look at Mike’s “Sentenced To Life” part…

This time around Chris Doyle, Kris Bennett, Matt Brian Foster and Van Homan all sit down to watch Mike Aitken‘s section from the “Sentenced To Life” DVD. None of these guys had seen the part prior to watching it for this, so getting their reaction is pretty amazing. Hit play and enjoy… You know Mike crushes it!

“Day 7 in our ‘Twelve days of Aitken,’ which is a retrospective look at Mike Aitken’s BMX career as seen through the eyes of some of those who know him best via a selection of his hugely influential video parts, hones in on an unconventional pairing of Mikey and “Sentenced to Life.”

At this point, everyone was a fan of Aitken, including Dave Mirra (R.I.P.), who was heading up a video called “Sentenced to Life” filmed by Brian Purdy. Commentators Doyle and Bennett dish out some industry knowledge related to MirraCo and the quest for Mikey to leave FIT and join the team during the time the video was filmed, and his decision to stay loyal to FIT over a larger payout. BF and Van also point out that this video was filmed primarily on trips, so you know all those outrageous park clips were most likely from the first day of him riding there. And in typical Aitken fashion, all varieties of terrain are casually annihilated. That last concrete park line from start to finish is seriously incredible. -RD

It’s time for Chris Doyle and Kris Bennett to sit down and watch Mike Aitken‘s part from the Square One “Wide Awake Nightmare” video. This is one hell of a part with Mike’s serious ability to ride anything and everything really showing through. Hit play and take it all in!

“Day 6 in our ‘Twelve days of Aitken,’ which is a retrospective look at Mike Aitken’s BMX career as seen through the eyes of some of those who know him best via a selection of his hugely influential video parts, reaches the halfway mark, and what better section to reminisce about than Mikey’s part in the Square One’s critically acclaimed “Wide Awake Nightmare?”

This was arguably the tipping point for Mike’s riding, where he had elevated his style to one that was heavily imitated (even the girl pants), but never duplicated. Those rubber-leg inverts, the effortless flow, that flawless swag oozing out of every clip. Mike demonstrated here the pinnacle of what can be defined as the all-around rider of the new millennium. Square One teammate Chris Doyle, and filmer/ editor/ producer of “Wide Awake Nightmare” Kris Bennett provide some insightful commentary on what it was like watching the Mikey show from a front-row seat on a regular basis. AC/DC’s “It’s a Long Way to the Top” was pretty fitting for his part- The Mike Aitken takeover of BMX had been realized. -RD