The latest episode of Drew Bezanson‘s “The Learning Curve” series from Red bull has arrived. It looks like Drew’s plan to ride downhill bikes on top of BMX isn’t quite going to plan. We’ve honestly never seen Drew get so frustrated before, so this is definitely bringing out a whole different side of him. Hit play to see how things went for his first contest. Based off the teaser for the next video, it does look like things are starting to look up though!

“It’s often said that 10,000 hours of practice are required to become a master in any field. In this latest episode of The Learning Curve, Drew Bezanson is trying to do it with just two hours of practice before his first official contest run at 26 Trix in Austria, and following a shoulder injury that knocked him out of the Swatch Rocket Air event before even getting started.
With a hectic schedule split between BMX contests and his slopestyle endeavors, Bezanson’s frustrations begin to boil over as he battles with the extremes of going from a fourth place finish at X Games on his BMX, to a less-than-stellar finish in his first recognised slopestyle contest.”
END_OF_DOCUMENT_TOKEN_TO_BE_REPLACED

The 3rd episode of Drew Bezanson‘s “The Learning Curve” series from Red Bull gives us a look at Drew putting in some work at Joyride 150 to learn some of the tricks on the bigger bike, along with some insight as Drew deals with being sidelined from injury for the first time thanks to a crash at his first contest. Nobody said this was going to be easy…

“On this week’s episode of The Learning Curve, we find Drew Bezanson putting in time at the Joyride 150 bike park warehouse, near Toronto, in Canada. With the mercy of a foam pit, Drew hucks his way to perfection as he prepares for competitive action.”

“Using the foam pit is key because of how fast I have to learn this stuff. If I was going to do it the old-fashioned way, on a regular jump, we probably wouldn’t be filming right now!”
END_OF_DOCUMENT_TOKEN_TO_BE_REPLACED

The second episode of Drew Bezanson‘s new “The Learning Curve” series from Red Bull has arrived. This time around we get a little look into the first few days of riding the bigger mountain bike, dialing things in, then getting a look at his first session on a real downhill course. This is bound to get real interesting real fast once things really start picking up!

“This week, Drew Bezanson gets a new toy as he unwraps his all new Trek Ticket S slopestyle bike and takes it for a test-drive at his hometown park Joyride 150 in Toronto. He’s quick to realise that there is plenty different about the new setup besides just the size of the wheels…
Even the simplest things like transitioning through jumps takes on a whole new feel on these new set of wheels. Hanging with the big dogs at Crankworx Rotorua, Drew gets his first taste of the contest scene and first ride on the official slopestyle course.
Getting some insight from slopestyle legends Sam Pilgrim, Max Fredriksson, Thomas Genon and Nicholi Rogatkin, Drew begins his quest for the magic number 1150 – the number of points he will need to accumulate to qualify for Red Bull Joyride.”
END_OF_DOCUMENT_TOKEN_TO_BE_REPLACED

We caught the trailer for Drew Bezanson‘s new series from Red Bull called “Learning Curve” which gives us some insight into Drew’s decision to add mountain bikes into his already packed BMX schedule the other day and have been curious what it’s all about since. Today Red Bull released this first episode giving us a little insight into what sparked Drew’s attention with mountain bikes and gets the wheels rolling so to speak. Expect 4 or 5 more episodes to really get into this one. It’s definitely good to see get some insight into this since we’ve seen a number of guys like Drew, Ryan Nyquist and more dabbling in big bikes lately. So expect more soon!

“In episode one of The Learning Curve, we catch up with Drew Bezanson a few months after his release of Uncontainable.
Still riding the high from the success of the film and his own sense of accomplishment, Drew begins looking towards the next challenge – slopestyle mountain biking – and coming to terms with the uphill battle he’ll face if he wants to shred slopestyle with the best of them.
Watch the first episode of The Learning Curve in the player above.” 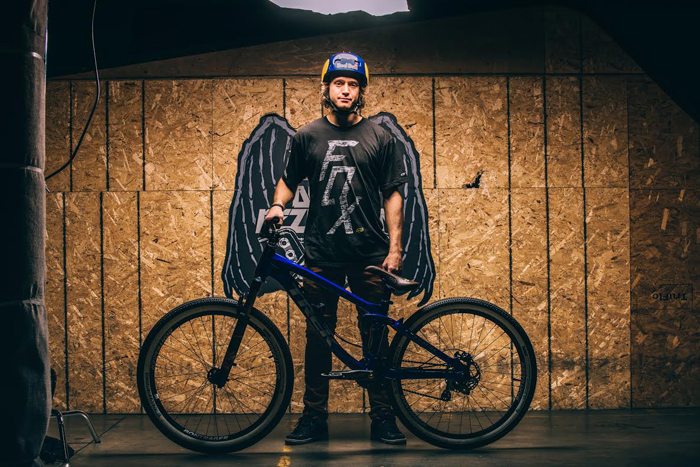 END_OF_DOCUMENT_TOKEN_TO_BE_REPLACED

As some of you probably have noticed by now, Drew Bezanson has also started riding mountain bikes on top of BMX. We haven’t seen too much footage of Drew getting down on the big bikes, but it sounds like that will be changing on Monday when Red Bull releases “The Learning Curve”. You already know Drew never disappoints, so get excited because we’re sure this will be awesome.

“Starting July 11 on RedBull.com/Bike, The Learning Curve documents Drew Bezanson’s first foray into the wide world of slopestyle mountain biking, as he takes on the 2016 season with the hope of earning a spot at Red Bull Joyride on August 21.
The six-part series released every Monday captures the high-fives, lows and humbling experiences of entering a new sport with the goal of competing at its absolute highest level.
Slopestyle mountain biking has taken its cues from all types of bike disciplines, from classic downhill, to dirt jumping and of course, BMX.
While many riders in the field reflect those various backgrounds, this year marks the first time that one of the most recognised BMX riders in the world takes on the FMB World Tour in an attempt to reach Red Bull Joyride.”

END_OF_DOCUMENT_TOKEN_TO_BE_REPLACED

Here’s just over 1 minute of Drew Bezanson talking about why he loves Ethika underwear so much, along with a bunch of clips from his old Drew Bezanson Returns to Joyride 150 video that Red Bull released back in 2013! Hit play and take it all in!

END_OF_DOCUMENT_TOKEN_TO_BE_REPLACED

Earlier today we got a look at some Toronto X Jam highlights, now we have even more courtesy of Ride BMX for you to check out! Hit play and take a look at a ton of wild riding that went down on the park and street setups!

After you watch the video, check out this Toronto X Jam 2016 Finals Photogallery