Well, that wasn’t a long wait! The teaser video for Eclat‘s new “Northern Rails” video dropped yesterday and now we get a look at the full video! This video features Jordan Godwin, Harry Mills-Wakley and Jordan O’Kane going to work on street spots up in the northern part of the U.K! Take a look at what went down from a ride on the train, one trip to the hospital and a ton of spots that were put to heavy, heavy use.

“The UK squad consisting of Jordan Godwin, Harry Mills-Wakley and new addition Jordan Okane jumped on the train and headed north for a week of handrails, neck-braces and Greggs.

Massive thanks to SNAP Distribution for making this a reality. Filmed and edited by Callum, Earnshaw.” – Eclat

It looks like Eclat have a new video that will be coming out here in the next few days called “Northern Rails“. Below is a promo video for it that doesn’t give away a whole lot about what’s to come other than that it will feature Jordan Godwin, Harry Mills-Wakley and Jordan O’Kane. We’re not sure what part of North got a hurting, but we’re assuming it was the UK and that these guys put the trains to good use to make this one happen. That’s all we got. We’re not detectives!

United Bike Co.‘s squad over in Europe decided to spend some time in Berlin, Germany exploring the spots and stacking clips. Here’s a dialed video that came from the trip that’s filled with some smooth lines, big grinds, plenty of style and more for you to start the new year off right!

“It’s 2017 and we’re getting futuristic in here! Sometimes things just hit and that’s exactly the case with this new one from United’s young’ns, Sebastian Anton, Fernando Laczko, Tom Deville, Jordan O’Kane and Harry Mills-Wakley in Berlin. The level of progression from these five seems like it just went through the roof on this trip – and not only is the tech strong with this crew but they sure aren’t scared to send it either. Get your robots, glow sticks and face paint out for this cross-era hybrid mashup via the new and improved lens of Peter Adam. The future is now..

Filmed and edited by Peter Adam”

The Etnies team riders are no strangers to Malaga, Spain with their frequent visits to ride Ruben Alcantara‘s skatepark, the never ending spots and soak up the sunshine. Some of the Etnies international team decided to take a trip that way to spend some time seeing what they could stack for clips. Needless to say, they ended up with another dialed BMX video for your viewing pleasure. Check it!

“Going to Malaga to film a video? Well, Ruben takes us through the essentials before etnies teammates Sebastian Anton, Jordan O’Kane and Harry Mills Wakley take on the task many have previously undertook. These three young’uns came through in a big way for this one – not your average Malaga edit!

Filmed and edited by Peter Adam”

Check out this new one of Jordan O’Kane getting some time in at the 4Down warehouse ramps and the Boyley Forever park in Hastings, England! This edit is packed with tons of grinds, bars, whips and some heavy drops to flat that will make your knees quiver.

END_OF_DOCUMENT_TOKEN_TO_BE_REPLACED

Phil Martin and Jordan Okane teamed up for this new edit where they destroy a handful of parks around the Hastings and Brighton, England area! Take a look and see all the clips they stacked!

“I have been working with Phil & Jordan for the last couple of months on a split edit which has been filmed at 4down, Hastings Skatepark, The Level, Brighton, Falmer and various other locations. I am very impressed with the outcome on this one! enjoy!
music is for entertainment purposes only, no copyright intended.
Song: Brutus – Spirit Of Time”

END_OF_DOCUMENT_TOKEN_TO_BE_REPLACED 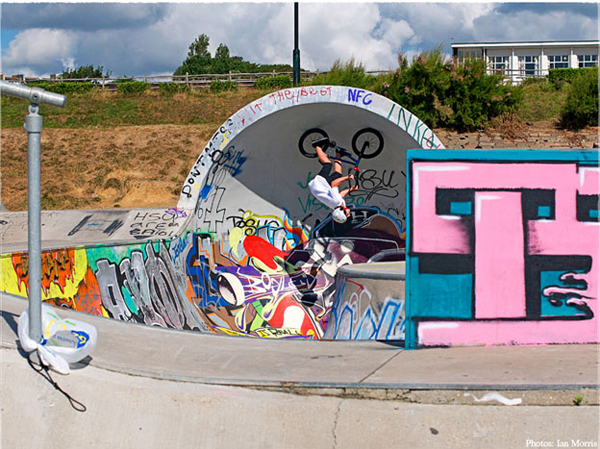 This week, the guys at Terrible One caught up with their U.K connect, Jordan Okane to ask him a few questions. You can check out the full Q&A after thge jump!

END_OF_DOCUMENT_TOKEN_TO_BE_REPLACED

Jordan O’Kane Welcome to the team from Source bmx on Vimeo.

Jordan O’Kane is now doing it for Source BMX. Check out this welcome edit loaded up with goodness!

“Sourcebmx presents this welcome to the team edit of Jordan O’Kane. A little welcome edit filmed around Hastings, UK over a few sessions this winter. Features the spots Jordan rides most of the time; Hastings Park, 4 down Park, Source bowl and there is even some street thrown in for good measure.”