We always get stoked when we see Paddy Gross‘ name pop up! You know he is going to be throwing down some ridiculous technical lip tricks that you won’t want to miss. Here’s a short but sweet one Colony dropped from a recent trip back to Germany! Needless to say, this is well worth the watch!

“Paddy Gross recently headed back over to Germany for a good friends 40th birthday jam. Marcel Gans happened to be there so he grabbed his camera and documented Paddy absolutely destroying the transition for an hour!

Colony uploaded another gem from their “The Colony DVD” video that came out back in 2011. This time around we get a mix section and it is definitely a reminder of the crew they had back then that we kind of forgot was on the team at that time. Either way, this section is loaded with awesome park, street and flatland riding that is still real good even 10 years later!

Paddy Gross coming through with a dialed new video filled with brakes and pegs!

Here’s a really rad one that surfaced online featuring Paddy Gross putting his brakes and pegs to good use from Portland to Germany and a few other places. This also features front brake magic from Adam Banton, Axel Reichertz, Brett Banasiewicz, Clint Millar, Rob Nolli, Dave Freimuth, Chad DeGroot, Nick Harkins, Chris Rye, Tobias Wicke and Rick Moliterno. If that doesn’t sound amazing, then you’re blowing it! This BMX video is packed with amazing ramp riding and a little flatland from start to finish!

“I agreed to this project when it was still a baby. Now a year later it has grown into quite a monster of a video. We have had the honor of collecting original clips from many highly influential and legendary riders from the mid school. Which has made this video such a joy to create. Its like stepping into a time machine and traveling back to the glory days of bmx. Again thank you everyone who had contributed this project. it has been a blast. Enjoy!” – Matt Miller

There’s nothing we like more than starting our day off with a new Lip Lords video! This one is amazing because this one went all out with some of the finest lip gamers in BMX making appearances beyond just Brant Moore and Sponge who have been crushing it in all the past parts! Everything about this video kicks ass from start to finish! MUST SEE for sure!

“One ramp, endless possibilities.
The Lip Lords were originally a group of guys from colorado who rode in the late 80s and early 90s.
This series is a tribute to the original lip lords.
This is Lip Lords.
Karl Hinkley, Erik Elstran, Rob Ridge, TJ Henderson, Brodie Gwilliam, Nick Harkins, Paddy Gross, Bobbie Altiser”
END_OF_DOCUMENT_TOKEN_TO_BE_REPLACED

When the Front Brake Brethren get together, you know you’re going to see something that kicks a lot of ass. A good number of the crew recently got together at Ramp Riders and SK8 Liborius for a full weekend of good times and riding. Check out the highlight reel above to see what you missed out on!

“A group of the Front Brake Brethren gathered in St. Louis for the weekend. They spent Saturday at one of the Midwest’s greatest indoor parks, Ramp Riders. The guys had their way with the five foot street spine, for most of the day. Sunday we had mass at the nicest church I have attended, Sk8 Liborius. This colassal church was built in the 1880s and is now filled with ramps and graffiti. Great weekend with good people.
Riders: Corey Bradley, Matt Lough, Billy Woodfin, Dan Hylton, David Buseman, Nick Harkins, T.J. Henderson, Bobbie Altiser, and Paddy Gross.
Filmed by: Anthony Loconte, Jerrod Glasgow, and David Buseman
Edited by: Jerrod Glasgow”
END_OF_DOCUMENT_TOKEN_TO_BE_REPLACED

Can’t go wrong with some new footage from Paddy Gross! The crew over at Colony hit us with a link to a new Instagram compilation BMX video with footage of Paddy that was filmed over the course of the past 8 months at The Lumberyard in Portland, Oregon! It’s crazy to think pretty much all of this was filmed between a quarter pipe and spine, too! Gotta love that front brake magic. Hit play and take it all in!

END_OF_DOCUMENT_TOKEN_TO_BE_REPLACED

Colony have released their latest BMX video from a trip a good number of their crew took to Oregon back a few months ago! Watch as the crew roasts some of the Northwest’s finest cement parks, the Lumberyard, trails and more! There’s a ton of amazing riding on all these great spots, along with some dialed film work. This is one you won’t want to pass up!

“Back in September Victor Salazar, Alex Hiam, Chris Bracamonte, Nathan Sykes, Clint Millar and Keith Treanor took a week trip up to Oregon, met up with Paddy Gross and thanks to Bracamonte we have a really good 9 minute video for you guys. Chris nailed it on this, showcasing the good vibes that great times that went down on the road. Thanks to all the locals that welcomed us everywhere we went.

END_OF_DOCUMENT_TOKEN_TO_BE_REPLACED 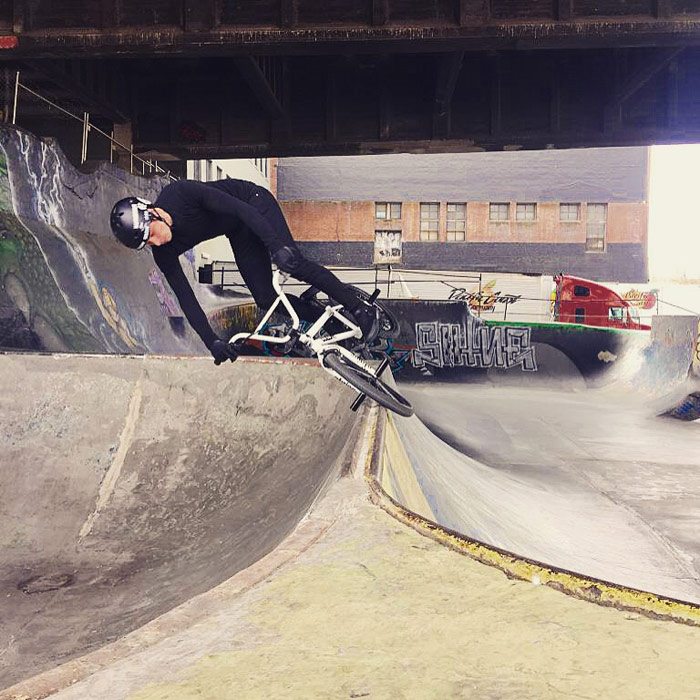 It’s funny how BMX works. If you ride long enough, travel and go to a bunch of events, you’ll undoubtably meet a lot of people, and also end up meeting people you never expected to meet. The other weekend in the middle of Wisconsin during the Baco-A-Go-Go jam, I had the chance to meet one rider in particular that I’ve known of and watched ride since I was a kid, but never quite expected to meet. That rider is Paddy Gross. Paddy has been a front brake legend for years and continues to blow peoples minds to this day. After watching him ride in person and finding out a little more about him, I knew there was no way we couldn’t do an interview with him. So, today, were stoked to drop this interview where we find out a bunch of stuff about him that you probably had no idea. So, let’s get into this already!