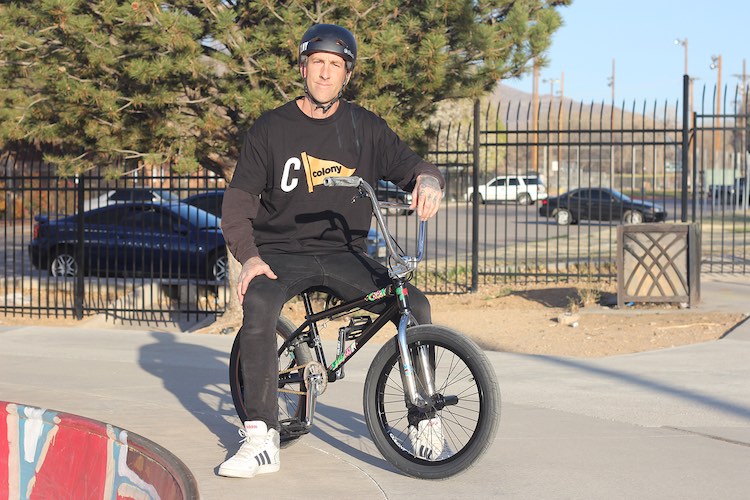 Here’s some sponsor news for you! Colony BMX have announced that they have added Southern California legend Steve Woodward back to the team! Steve was apart of the Colony team early on, but stepped away and took some time away from focusing on riding for a few years. As many of you might know if you follow Steve on Instagram, he’s been back on it for a while now and crushing it like always! Stoked on this, so hopefully it means we’ll be seeing even more of Steven in 2021! Check out photos of his bike and some words about the news over on the Colony Website.

END_OF_DOCUMENT_TOKEN_TO_BE_REPLACED

It’s about time somebody picked Steve Woodward up! This dude has been on fire for so long. It looks like he’s now doing it for Specialized. Check out this video of him and Mike Montgomery going wild on some San Diego spots! This is a definite must see.

“Steve Woodward joins Danny Dhers on the 2013 Specialized BMX team. Watch Mike Montgomery officially introduce Steve and his p series in this edit from John Andrus. Steve will be riding the p.20 in 2013.

Check him out on IamSpecialized.com/gravity”

This past week was a busy one. With the new year kicking in we saw a ton of end of 2012, beginning of 2013 edits along with a heavy amount of sponsor changes. I dug through the past weeks posts in the Daily Section to pick out the best videos from the week for you guys to check out. This week we’ve got 15 videos featuring the likes of Miles Rogoish, Erik Elstran, Grant Germain, Phil Demattia, Jeff Kocsis, James Meliota, Steve Woodward, Ben and Levi Hucke, Alex Donnachie, Rob Ridge, Matt Closson and more for you to check out. Let’s get into this!

END_OF_DOCUMENT_TOKEN_TO_BE_REPLACED

I think we can all agree that there isn’t enough Steve Woodward footage going around these days. This video is a good reminder of just how good this dude is. Check him out absolutely slaying Dennis Enarson’s backyard ramp setup.

“Bmx rider Steve Woodward heads down to San Diego and rips Dennis Enarson’s backyard ramps a new one! Steve is one of the few guys still throwing down scary peg less-over-icepicks like the ones in this clip. Heavy! ” – Crooked World

Check out Gary Young, Kyle Hart, Steve Woodward, Dave White, Tom Perry, Dirt Ron, Andrew Cherrier, Mitch McKelvey and Albert Mercado getting down at one hell of a backyard ramp setup. I want this place in my yard!

“Steve Woodward and Gary Young lead the charge along with the slightly sober San Diego crew for an epic backyard session on Dave White’s private mini ramp. Dubbed Area 43, Dave White keeps it real with some lip tricks that would make Rick Moliterno proud while the rest of the guys roast the tranny with some unorthodox style.” – Network A

Steve Woodward has been KILLING it for years and it sucks that footage of him seems so rare these days. Either way, Miles Rogoish caught up with him to do some filming around San Diego and they came through with this edit. You NEED to see the ender clip. All I’m going to say is that’s the gnarliest pegless over ice I’ve ever seen.

“We haven’t seen much from Steve lately, but he’s been killing San Diego like mad and doing it all on his own terms. Watch this new video to see some insane pegless over icepicks, huge superman variations, brand new technical grind combos, and much more. Credit: Miles Rogoish”

Holy hell. Steve Woodward footage? Where the hell has that dude been hiding?