It’s always a good day when a new video featuring Andy Maguire and the Santa Cruz crew surfaces online. Here’s a fresh mix of footage from Andy, Ryan Nyquist, Jackson Allen and many more from the Santa Cruz, California area getting down on street spots, skateparks and trails. This is packed with awesome riding and some real clean film work. Overall this is a great BMX video from start to finish, so take a look! You won’t be disappointed.

“Andy Maguire has been holding it down for the street scene in Santa Cruz for quite some time now so when he contacted Chris Bracamonte about filming some sort of scene report last year we were immediately on board. Here’s a few words about Santa Cruz from the man himself.

“A severed blue hand, screaming in pain; numerous bigfoot sightings; a 93-year old wooden roller coaster; and free Eddie Money concerts once a year. Aside from rich ocean scenery surrounded by forest seclusion, the small coastal town of Santa Cruz, California is a place that oozes character. On any given day, you will probably stumble across dreadlocked hippies, young skate punks who were born and raised gliding across concrete, surfers who come from all walks of life or the awkward UC student taking their first steps into life as an adult. I was definitely the last example when I moved here from the suburbs over 12 years ago. At first, this place seemed like an uncomfortable, strange place, but over the years, the quirks and the lifestyle of the area slowly normalized to the point that it fills me with appreciation to call this place my home.

I don’t think I would call it home if it weren’t for the amazing bike-riding community of Santa Cruz. Much like the populace, there is a wide variety of riders here; a few legends (Ryan Nyquist and Ron Wilkerson), people who dig trails, cruise the streets, ride ramps, and even pioneer their own forms of freestyle. The riders here also seem heavily shaped by the environment that surrounds them. Although many riders here are extremely talented, the laid-back, vacationing attitude generally prevails over the drive to become a professional bike rider or to “progress” the sport. One thing I find pretty refreshing about our scene is that after the sun goes down and your muscles hurt from riding all day, you can usually count on grabbing a beer and hanging out with your riding compatriots as friends, not just people who are around and share the same interests. The scene values enjoyment, friendship, and creativity, rather than the statistical values of views, likes, and quantity of barspins. If the idea of being a part of a BMX retirement community sounds enticing, I would highly recommend risking your life on Highway 17 to check out what Santa Cruz has to offer.”

Filmed and edited by Chris Bracamonte

Have you ever wanted to drop in on Ruben Alcantara‘s bowl in Malaga, Spain, but you haven’t had the chance to take the trip there? Here’s a POV course preview for the Vans BMX Pro Cup that’ll give you a good idea of just how fun this place is to ride. Hit play to take a hot lap with Jason Watts as Ryan Nyquist follows with the camera! We cannot wait to see what goes down during the actual contest! After you watch this, check out the day one practice highlights!

“Strap on your helmet and take a ride with Ryan Nyquist and Jason Watts through the Ruben Alcantara Skatepark during the Vans BMX Pro Cup Pro Practice.“

It’s been a really interesting time in BMX. We have seen a number of old products revamped and brought back to life. It looks like Haro Bikes have decided to continue that trend with their Jackhammer 4-Piece Bars! 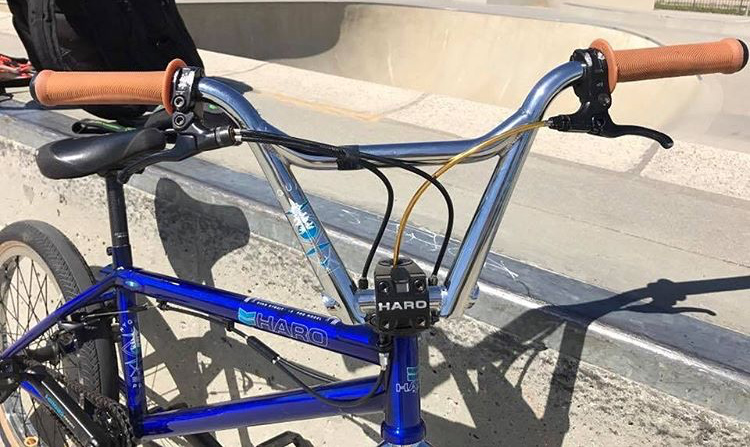 This is pretty awesome and we’re sure plenty of you Mid / Old School guys will be real stoked on this one. Haro Bikes have released Ryan Nyquist‘s new signature Jackhammer 4-Piece Bars for you to get your hands on! These bars are based off the originals from the late 90’s / early 00’s, but with modern geometry. The bars are made from full 4130 chromoly with three rise options; 8.5″, 9″ and 9.5″. All three sizes have 10-degrees of backsweep and 3-degrees of upsweep. Based off the photo we would assume they have a 28″ width. If you’re digging these bars, hit up your favorite Haro Bikes dealer to get a set ordered up!

“It’s 2017 and the Haro Jackhammer looking bars are in stock!!!
Get the look and feel of the late 90’s / early 2000’s all over again!
We are pumped on our continued relationship with Ryan Nyquist. He’s had a 20 year association with Haro Bikes now! If you want some of these bars, hit up your Haro dealer!!!” – Haro Bikes

Below is a video featuring Ryan Nyquist talking about the Jackhammer bars making their return!

“BMX legend Ryan Nyquist throws it back to a classic design he made famous with his new signature four-piece bars from Haro. Learn all about ’em right here!” – Vital BMX

Here’s a rad video we spotted over on Pinkbike featuring Ryan Nyquist where he talks about growing up riding BMX, being a parent, getting into mountain bikes and more! Ryan is an absolute legend on and off the bike, and this is a good reminder of that! Check it!

“Ryan Nyquist is one of the most succesful and influentail riders in the sport of BMX. Take a ride with Ryan from his early years of riding to accomplishing his goals and competing in Red Bull Joyride.”

Filmed and edited by Long Nguyen

We had been hearings rumors that Mike Gray had been working on an ankle brace for riding, but we didn’t know much about it until now! Here’s a promo video featuring Mike, Ryan Nyquist and Dennis Enarson talking a little bit about the brace and why they like them, along with some heavy riding clips showing you what the brace can hold up to!

After you check out the video, you can get the full scoop on the Space Brace on SpaceBrace.com.

Let this be a lesson to any of you guys who hope to someday compete at a professional level. Vans dropped this new video where Ryan Nyquist, Dylan Lewis, Gary Young, Jason Watts and a few others discuss the fine art of Snaking during practice at a pro contest like the Vans BMX Pro Cup. It’s highly frowned upon, but damnit… You gotta do it and you gotta be ruthless when you do it! Get the full scoop from these guys in real time as it’s going down!

“Snake or be snaked? Learn from some of the top riders in the world such as Dakota Roche, Gary Young, Ryan Nyquist and others on their take of snake or getting snaked while in Sydney Australia for the Vans BMX Pro Cup Series.”

During the Vans BMX Pro Cup the other week in Sydney, Australia, some of the guys decided to head to Five Dock skatepark for a session in their massive bowl. Dan Foley pulled out the camera to film some of the riding that went down. With a line up of Larry Edgar, Ryan Nyquist, Dylan Lewis, Kris Fox, Jason Watts, Cody Pollard, Chris James, and Corey Walsh, you know things got wild. Check it out!

“Raw footage from one of the craziest sessions I’ve ever witnessed. After one of the practice days at the Vans BMX Pro Cup in Sydney, a heavy crew met up at Five Dock skatepark and absolutely annihilated the bowl. I had to grab the camera for a bit and document it. I guess 10 ft. airs are normal now”