Last weekend the 040 BMX Park Invitational went down over in Eindhoven and some heavy hitters came out to put the spine ramp to good use! Above is a highlight reel giving you a look at some of the best riding that went down throughout the day! Hit play to watch Alex Coleborn and the rest of the crew go to work! There’s no shortage of bangers in this one.

“During this years EMoves Festival the guys from 040 BMX Park hosted the 040 Invitational Spine Ramp contest, inviting top name riders from all around Europe the contest went off like a bombshell. Crowds gathered and the 18 Septemberplein in the city of Eindhoven filled up quick. Check out the video and see for yourself!

Filmed and edited by Bob Drenth 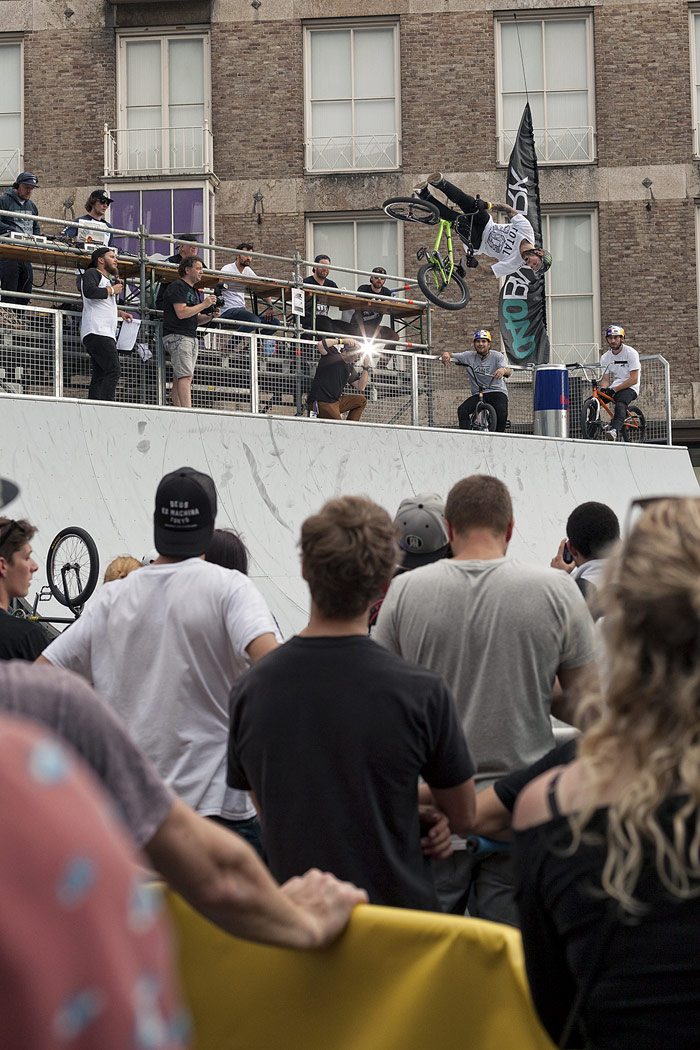 Just because the X Games are going down this weekend doesn’t mean there aren’t other contests going on. Yesterday the 040 BMX Park Invitational went down in Eindhoven and based off the photos and press release below, it sounds like things went off. Alex Coleborn took the win and Kevin Liehn pulled off the best trick. Check out the full press release and a bunch of rad photos by our friend Aaron Zwaal below! There’s bound to be a couple videos that pop up from this one sooner than later, too.

(Eindhoven, Netherlands 5 June 2016). The BMX Spine Ramp contest in the city centre of Eindhoven proved once again that you can bring BMX to the people. The 040BMXPARK ramp appeared to be a great asset to a successful BMX event that attracted riders from all over the place and an audience that stopped on their shopping spree to watch some high level BMX riding.

The day started early with the Wildcard class. 5 spots were up for grabs to ride the main event that started later on in the day. Pim Scheers (NED) blasted to first followed by Levi Weidman (NED) and Sem Kok (AMERICA). The last two available places went to Niels van Maren (NED) and Jari Roggeveen (NED) and each one of them were stoked they would get to ride the ramp again with the 19 invited riders who made the trip to Eindhoven. After some solid riding in the sunshine, 12 riders were selected to ride the final. The more time that was spent on the ramp, the more the riders got used to it. With €5000,= prize money available for the top 7, the finalists had to blast two more times.

7th place went to Daniel ‘Naran’ Penafiel from Spain who has his own riding style and brings tricks that noone else does. He double footplanted the wall for instance and did huge superman seatgrabs over the 2 meter high spine. You don’t get to see turndown backflips to fakie every day either. A pleasure for the eye for sure. Paul Thoelen from Germany simply goes higher than anyone and cranks variations on the quarters with lots of style. In fact, he makes everything look good including his Bri-flips, flairwhips and 540 footjams on the extension. It was hard to get Tom Justice (GBR) off the ramp. He had a smile on his face during his runs and kept on riding. Tom was enjoying it so much that kept adding trick after trick until he really ran out of steam. 5th place was his. Canadian Joel Bondu almost made the podium on his first visit to Eindhoven. Joel didn’t disappoint and brought tech tricks with lots of barspins, tailwhips and flairs. He also pulled a 180 triple barspin over the spine that didn’t go unnoticed. Local Daniel Wedemeijer (NED) got the first podium spot. Bronze was for him for riding different than others and riding both ways. His trick of the day was his fufanu on the fence at the DJ/Judges area. The shopping crowd decided to stay a little longer to see some more. Kostya Andreev (RUS) missed out on practice on Friday night but a true pro can adapt to a ramp quickly. It’s amazing how Kostya thinks. He pulled his first decade air on a quarter that day and later on tried a decade air to barspin because he figured he had enough time for it. Kostya packs many tricks in one run and the judges rewarded him with 2nd place.

First place was for Alex Coleborn who flew in from England for the Spine Ramp contest. Alex has the full package; tech, speed, tricks, skills, which you needed to win the comp. Alex stated that the ramp was the best transportable mini he’d ever ridden which shows he felt comfortable on it and was having a good time. Flair whips, 3 double whips, footjam variations, if you know what Alex is capable of, you have an idea of what it looked like, or just wait for the video, out soon. His score of 89,125 points over second place points of 85,625 are a good indication of how much he ruled the Spine Miniramp at the 18 Septemberplein. The Best trick award was for Kevin Liehn (GER) with a barspin disaster to 360 tire tap tailwhip in. 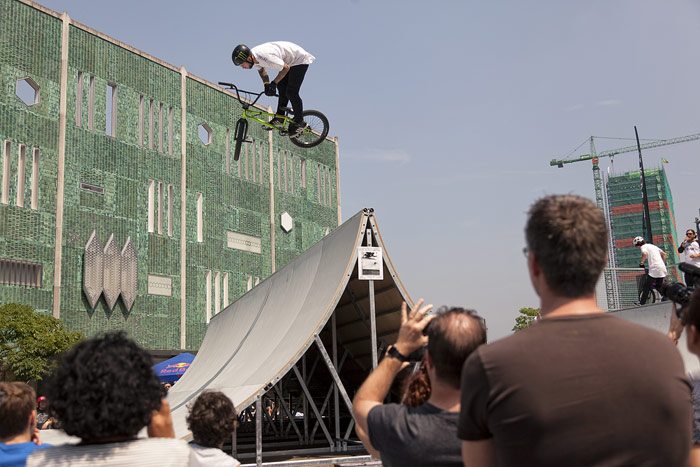 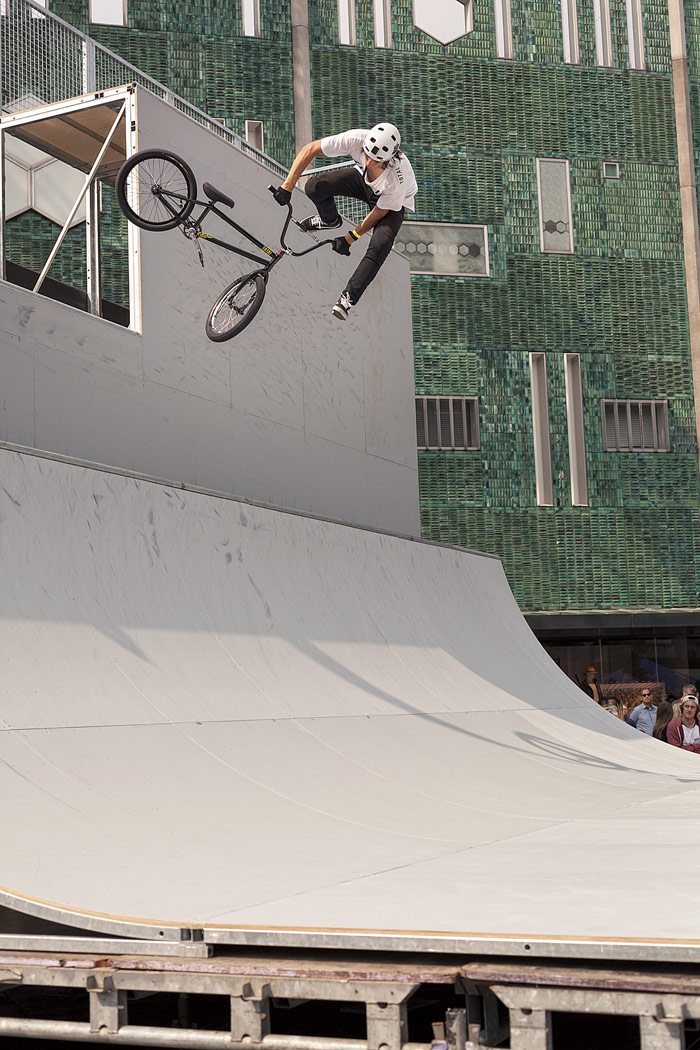 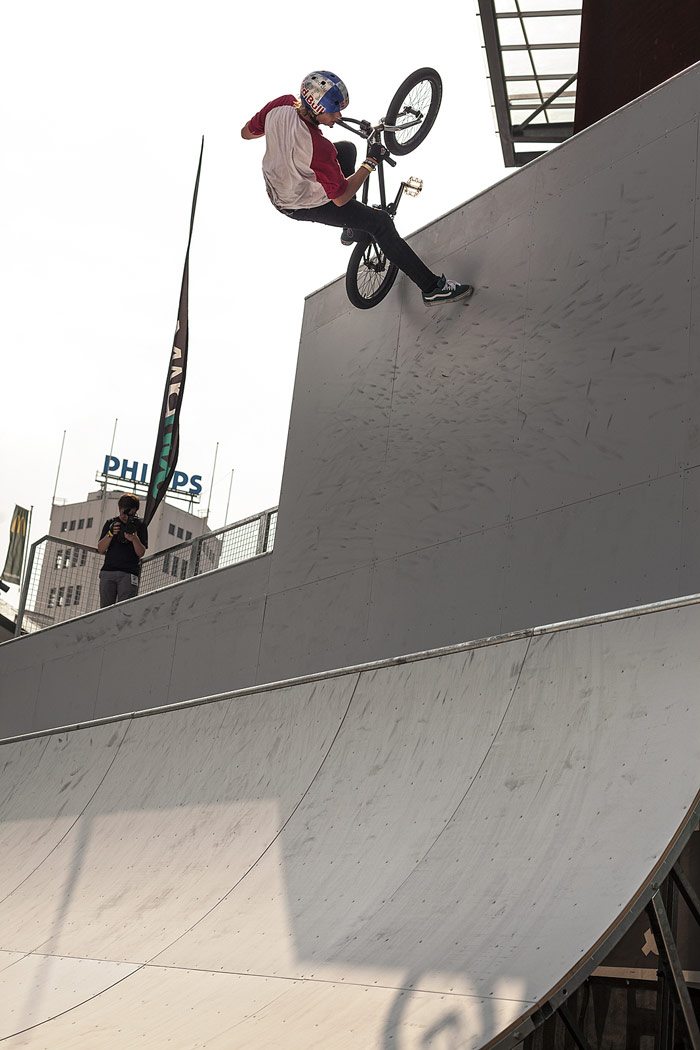 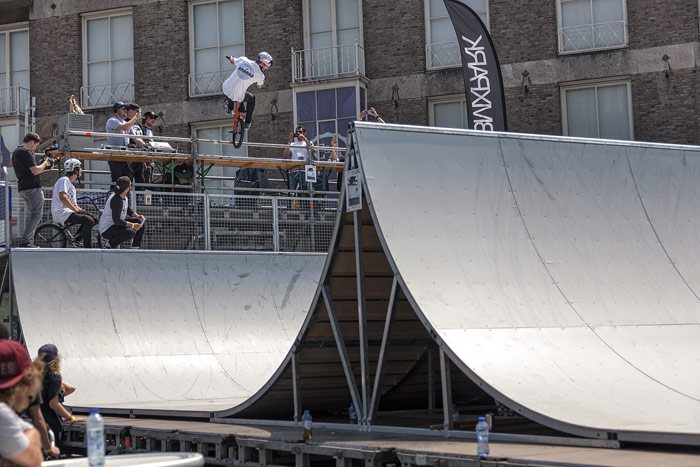 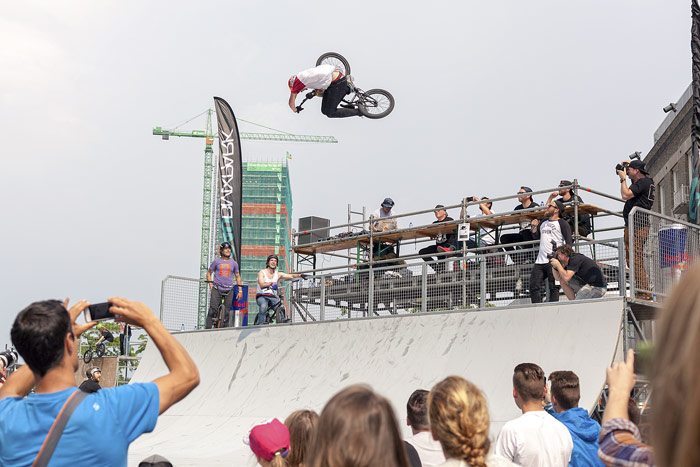 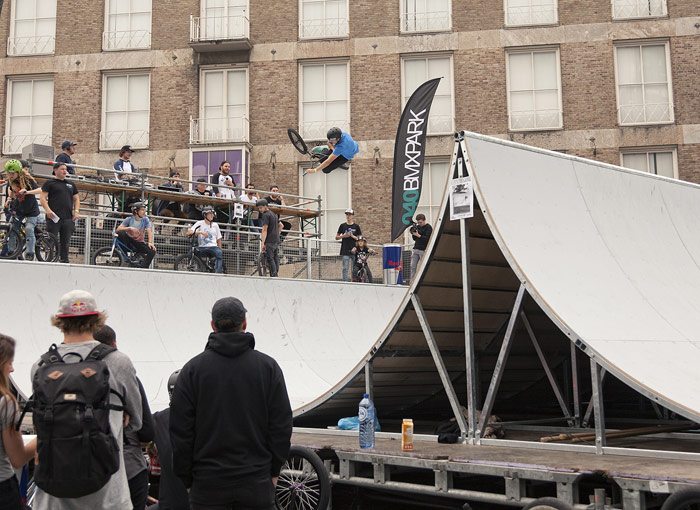 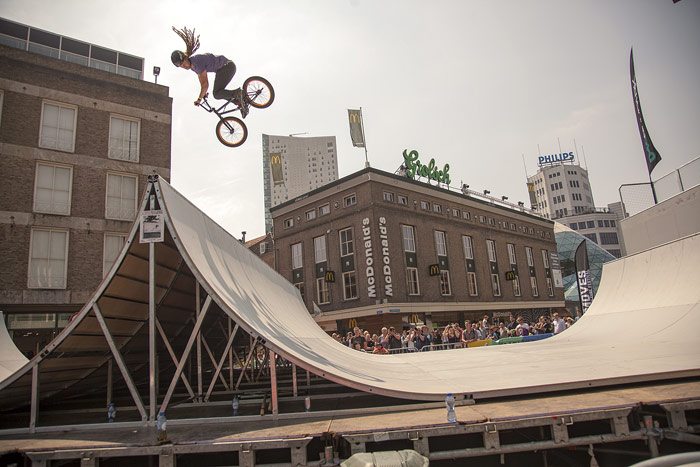 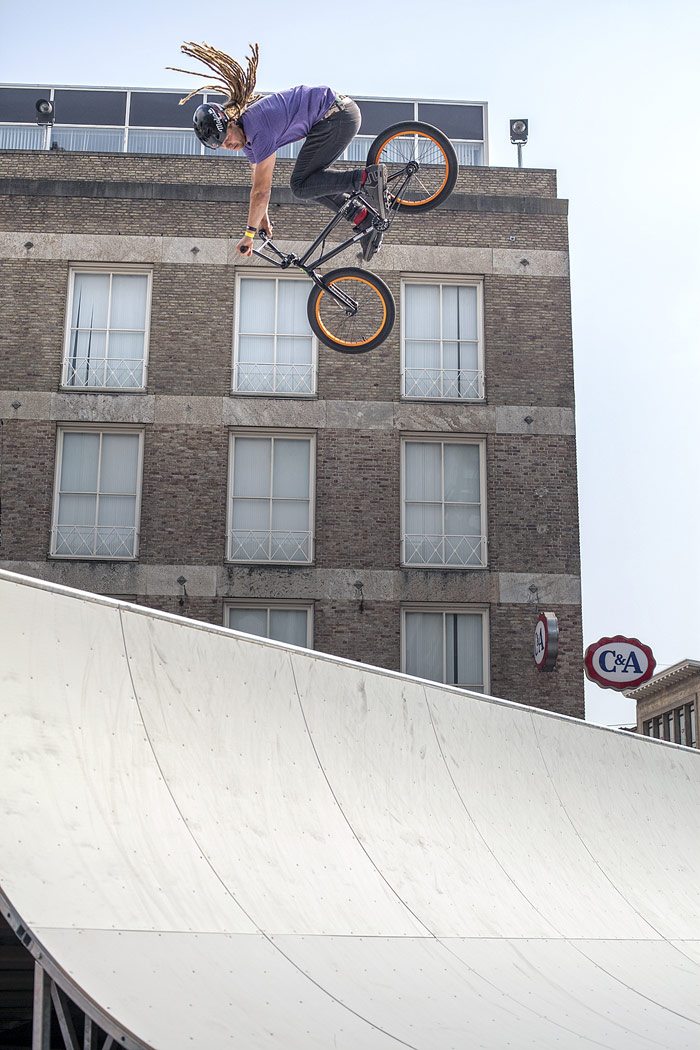 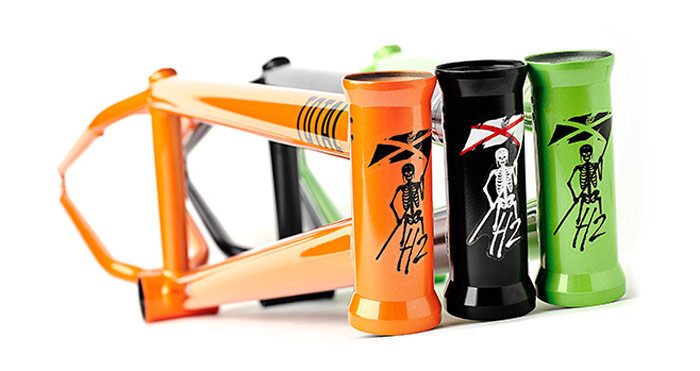 The Hangover H2 frame is available in 19.8″, 20.4″, 20.6″ and 21″ top tube lengths with black, chrome, sparkle green and sparkle orange for colors and can be picked up through BMX shops and mail-orders that carry Total BMX worldwide! 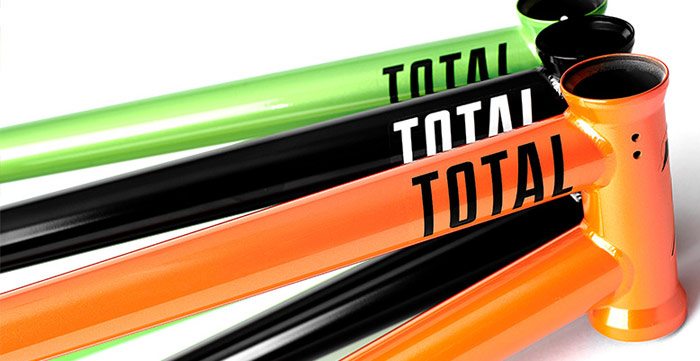 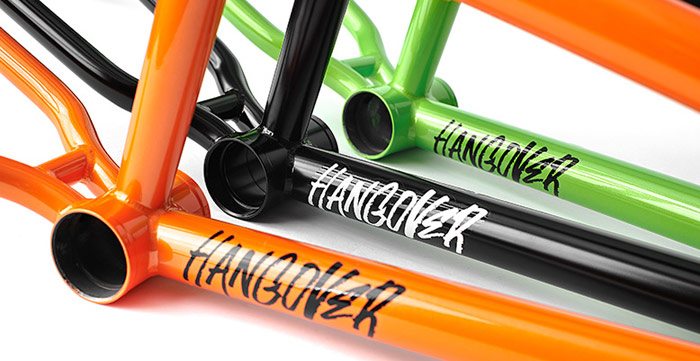 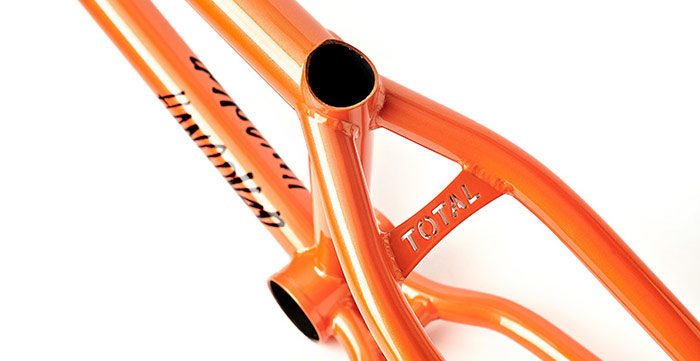 END_OF_DOCUMENT_TOKEN_TO_BE_REPLACED

If there’s a contest with some crazy ramps to ride, you can always count on the Total BMX team to show up and drop some hammers. Total BMX just released this highlight reel featuring their team riders throwing down at FISE the other weekend in Montpellier. Hit play to watch Irek Rizaev, Alex Coleborn, Andreev Kostya, Mark Webb, Daniel Sandoval, Nick Bruce, Colton Walker, Brock Horneman and James Jones get loose!

“The Total BMX Team made their annual trip to FISE Montpellier and it was amazing like always, Mark Webb killed the Miniramp and Alex Coleborn got 1st place on the Park course. The rest of the Team were on top form to.

Total BMX is one of the best BMX teams in the world and here is the place to keep up with the latest riding edits, bike checks and how to’s from riders such as Mark Webb, Kyle Baldock, Alex Coleborn, Daniel Sandoval amongst our other heavy hitters.”
END_OF_DOCUMENT_TOKEN_TO_BE_REPLACED

This past weekend was a hectic one in Montpellier, France as FISE took over and brought some of the best BMX riders in the world to their city to go head to head on their park and spine ramp. Above is a look at all the madness that went down during the Park finals that almost got rained out. Needless to say, you’re going to swear uncontrollably a few times watching this one.

The Villa Road crew are back with a new BMX video from one of the productive sessions they were able to get in at the Saffron Walden skatepark. This has footage from Damo Wilkinson, Bob Manchester, Inch Thomson, Matt Priest and Alex Coleborn for you to check out. With a line up like that, you should expect plenty of style! Hit play and enjoy!

““Get a bunch of bikes and ride em around with you’re friends… It’s the shit!” Tyler the Creator knows what’s up!

There’s not too many contests that are like FISE. You don’t have a lot of mini spine contests, and you especially don’t have many with a couple thousand people packed around the ramp losing it over all the tricks. Check out highlights from the Mini Spine finals and best trick! Things get wild and there were definitely some painful slams.

There’s no denying that 2015 was an incredible year for BMX videos and the progression of riding in general. We’ve seen a lot of compilation BMX videos lately, but this one is definitely worth hitting the play button on. It’s pretty much 10 minutes straight of some of the wildest riding that went down between park, street and dirt with riding from all the big name guys like Garrett Reynolds, Dennis Enarson, Alex Coleborn, Devon Smillie Chad Kerley, Kriss Kyle, Alex Donnachie, , Simone Barraco and many, many, many more to some of the up and coming unheard of guys that made some waves as well. Take it all in!

“Surely this is hard to stack best BMX clips in a 10 minute video especially when the words “best” and “BMX” are almost incompatible, but we wanted to show you guys what we enjoyed this year most of all. When we stopped editing the first time the video was over 30 minutes and it seems people are not really into spending that amount of time for different reasons, so with a grieve in our hearts we needed to shorten this to 10 so more people are going to watch this. One of the hardest things we have ever done haha. Also we wanted to thank all the riders, filmers and people that make all the BMX videos happen. It’s sooooooooooo HUGE and it helps riding and seeing BMX differently so much! THANK YOU!