Fiend coming through with a short but sweet video featuring Garrett Reynolds putting his signature Reynolds V2 frame to work out in the streets of California. This edit has a pretty chill vibe to it, but it’s Garrett, so chill is still pretty wild! Check out what he cooked up for clips from technical grind combos to huge whips down stair sets and more in this new BMX video!

Track: Rodriguez – “Only Good For Conversation” from the album “Cold Fact”

We haven’t seen Matt Comeau‘s name pop up much the past few years, and now we now why! He’s been slowly stacking clips for this new edit that is packed with a ton of really good clips. This has a little bit of everything from a big smith grind off a roof to smaller jibby type clips, making for a real good watch. Take a look!

“Fiend holds their cards close to their chest as far as videos and riders go and here we have a prime example of why with their Canada AM rider from Halifax Canada, Matt Comeau. You might not have heard of him but he comes in with a bang, with lining up tight transitions, super tech combos, things that seem very nbd, this is definitely one to watch.” – DIG

“This is Matt’s first release since getting on Fiend and only web video since we released BUSINESS II. We’ve been working on this since Spring 2017, a long time for a web video but we wanted to try and be selective with the clips we used so we could release something great. It was filmed all over the Maritimes of Canada, Montreal, Barcelona and New York City.” – Ian Fleming

The songs are:
“Excuses” by Warsh – Bandcamp: https://warsh.bandcamp.com/releases)

“Throne of Blood” by Prince Jammy

Photography in the video is by Andrew Phillips and Ian Fleming
Thumbnail photo: Joseph Kubik @josephkubik

Filming and editing by Ian Fleming 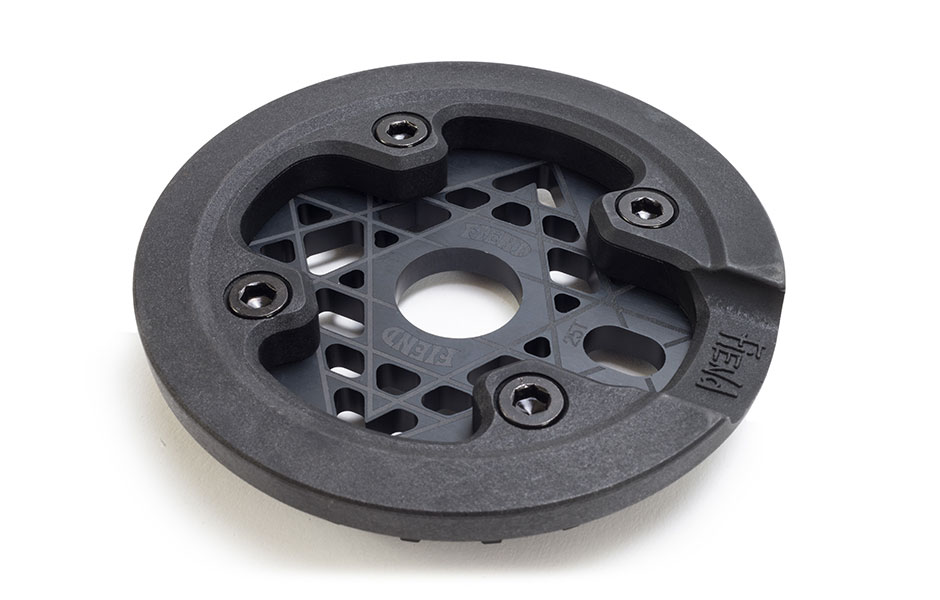 Is it time for a new sprocket? Looking for something that has a guard, but you want the option to run a regular sprocket, too? Fiend have released the JJ Palmere guard sprocket for you guys to check out. This sprocket is made from 6mm thick CNC machined 6061 aluminum with center aligned teeth and a laser etched logo. The sprocket has a unique double triangle design with plenty of cut outs to help reduce weight. Along with that comes a replaceable injection molded, high impact nylon Havoc Guard that is held in place by 4 bolts, giving you extra protection if you’re putting a lot of work in on rails and ledges.

The Palmere Guard Sprocket comes in Black, Matte Red and Tumbled Aluminum with a black guard for $49.99 through BMX shops and mail-orders that carry Fiend worldwide now. You can also pick up replacement guards for $11.99 if you burn through it. 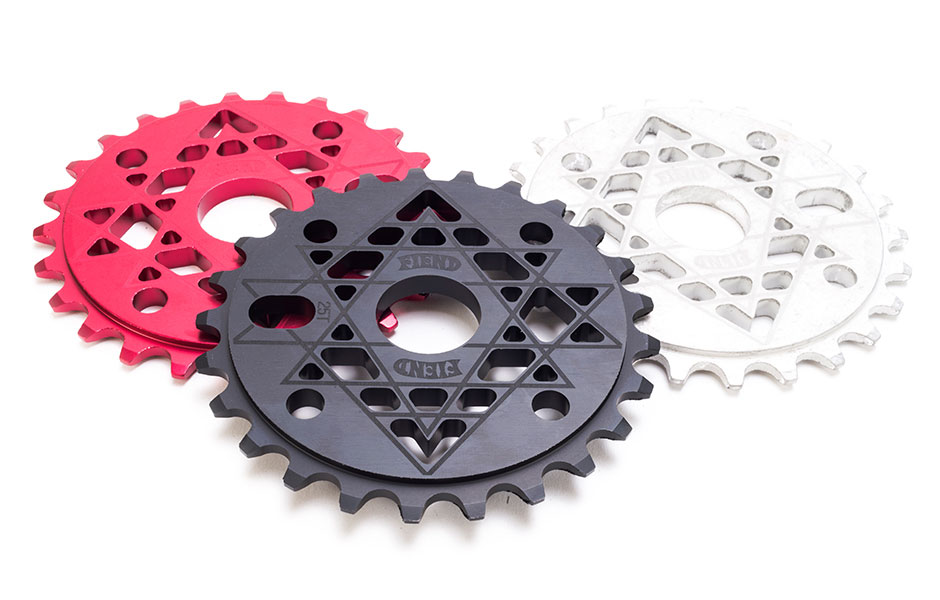 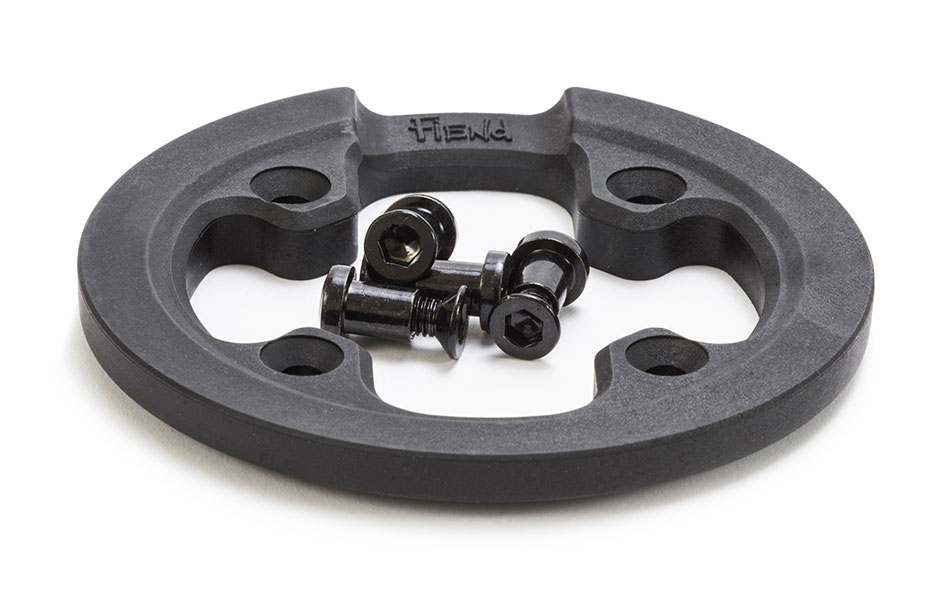 What do you think of the Palmere Guard Sprocket? Do you have any questions? Let us know in the comments below.

Not quite what you’re looking for? Check out more BMX Sprockets

Check out this short but sweet Augie Simoncini colorway promo from Fiend!

You can’t go wrong with some Augie Simoncini footage. Here’s a real short and sweet, one clip banger Fiend dropped featuring Augie doing one hell of a nose manual at the Brooklyn Banks, along with a good look at his signature colorway on the Reynolds V2 frame that just dropped! You can find this frame at Fiend dealers worldwide!

Get a closer look at Garrett Reynolds’ current Fiend setup!

Curious what Garrett Reynolds is rolling around on for a setup these days? Ride BMX caught up with Garrett for a new Video Bike Check where he gives us a full run through of his current Fiend and Cinema BMX setup with plenty of details on why he runs certain parts. There’s even a few sneak peeks in here like his new signature rims that he’s currently testing! Take a look!

“We all wish we could like Garrett Reynolds, but that just ain’t possible. But seeing as Garrett is such a nice guy, he went over all of his Fiend and Cinema parts for his bike check and explains why he sets his bike up the way he does. So at least you can build your bike just like his—as long as you’re not like six feet tall!

Raul Jula gets down on the streets of Barcelona…

The winter has been a long, rough one for Fiend‘s connect, Raul Jula over in the Czech Republic, so he made his way to Barcelona, Spain to soak up the sun and endless spots thanks to TBB Bike! As you should know by now, Raul is a beast on a bike and he stacked a ton of great clips during his stay. Hit play and check it out!

“Raul is one ambitious guy, who basically follows his instinct and does what he wants to. It’s clear that one of these things is to progress on his bike as much as possible. Because of that he knew he gotta start the season right. And what could be better then spend 2 weeks in sunny Barcelona, when back home is freezing cold?

TUNE: XAVIER WULF – CHECK IT OUT”

Take a closer look at the Process IC Fork from Fiend… 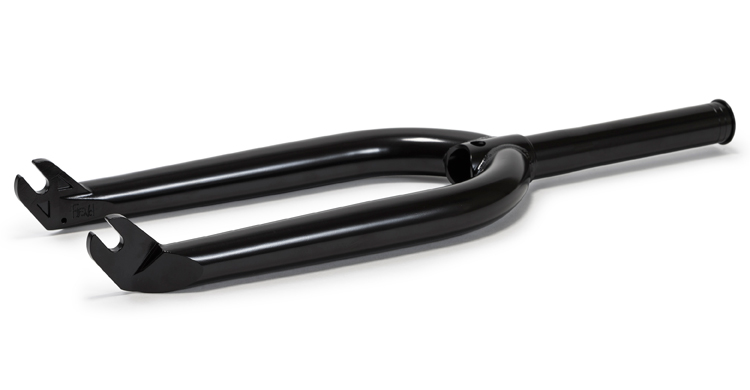 Is it time for a new BMX Fork? Have you given the Process IC fork from Fiend? This fork is made from full heat-treated 4130 chromoly tubing with a one-piece machined steerer tube with an integrated bearing race with tapered legs and Investment Cast 6mm thick, 3/8″ dropouts with a 20mm offset. The fork also comes with a 7000 series alloy compression cap to keep everything tight.

The Process IC Fork from Fiend comes in Black and Chrome for colors with a weight of 2.18 lbs. and a price tag of $139.99 – $159.99 depending on color through BMX shops and mail-orders that carry Fiend BMX, or direct from the Fiend Webstore.

Available in Black and Chrome colors. 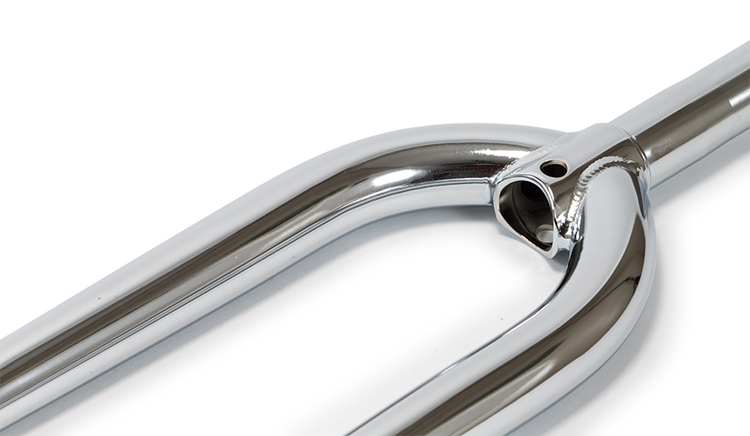 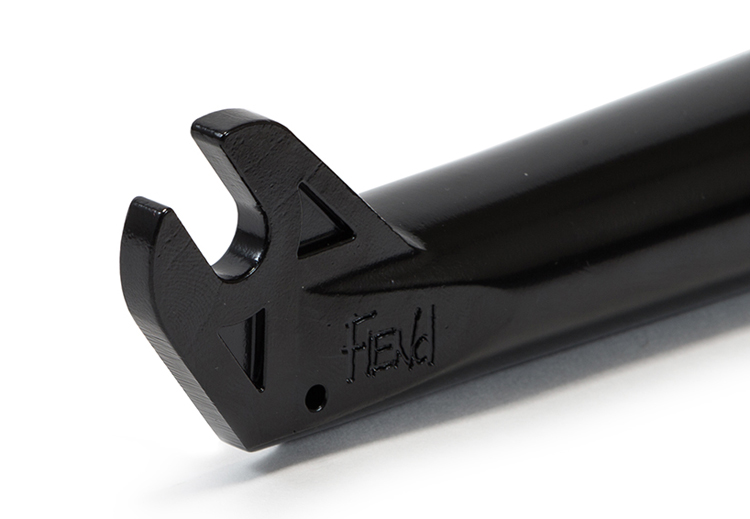 What do you think of the Process IC fork from Fiend? Do you have any questions? Let us know what you think in the comments below!

Not quite what you were looking for? Check out more BMX forks here.