The Shadow Conspiracy and Subrosa have released their “ONE” video online for everyones viewing pleasure!

Here’s one we’ve been looking forward to for a few weeks now! The Shadow Conspiracy and Subrosa Brand team riders got together in in Atlanta, Georgia where they spent their time crushing spots galore! Hit play because this is 22 minutes of pure amazing.

“In celebration of the release of the “ONE” video use the code ATL-ONE on shop.subrosabrand.com or shop.theshadowconspiracy.com for 10% of your order for the next week. Deal ends Friday July 13th.

Subrosa Brand and The Shadow Conspiracy present ONE.

Over the years, The Shadow Conspiracy and Subrosa Brand have existed under the same roof down in Florida, but we haven’t seen them do a lot of projects “together” so to speak, they’ve done a good job of keeping the brands separate. That changes with “ONE” which brings the team riders that represent both brands together for a team trip that was bound to produce some serious bangers. Today, we get a look at the trailer and if you aren’t excited to see this on the 4th of July, you’re crazy! Get ready!

“Subrosa Brand and The Shadow Conspiracy present ONE.

Subrosa’s Ryan Sher sits down with Kyle Hart to ask him your questions!

It’s that time again or another round of Fakie News where they sit down with one of their Pro team riders to ask them some questions submitted on Instagram. This time around Subrosa‘s Ryan Sher sits down with Kyle Hart to ask him a ton of questions about getting on Subrosa 11 years ago, getting water poured on him in Japan, eating crazy food and much, much more! Check it all out!

A few weeks ago we posted on our Instagram that we wanted our fans and followers to ask Subrosa pro rider Kyle Hart a few questions to get to know him better.

I hopped on a plane to Phoenix Arizona and sat down with Kyle between target practice in the desert and hit him with my favorite questions from you guys! Check it out!

Subrosa “Fakie News” will be your chance to stay up to date with all the latest Subrosa news! Episodes will contain team rider updates, new products features, viewer questions, funny videos, events and jam calendar, rider interviews, deals and specials in our web store and more!”

The latest Strays photo flipbook from Ben Austin has arrived!

It’s time for another round of Strays from Ben Austin! This time around he has recruited photographers Ryan Ogawa and Scott Marceau as contributors! As always, this flipbook contains a bunch of great riding related photos that didn’t have a home, until now! You can find street, skateparks and trails in this one, so give it a quick look!

As always, if you know any photogs who are looking for a place for their work, feel free to send them my way!“

The Shadow Conspiracy and Subrosa World Tour continues! This time around the crew are heading south to Ecuador in August! Check out the full details below! 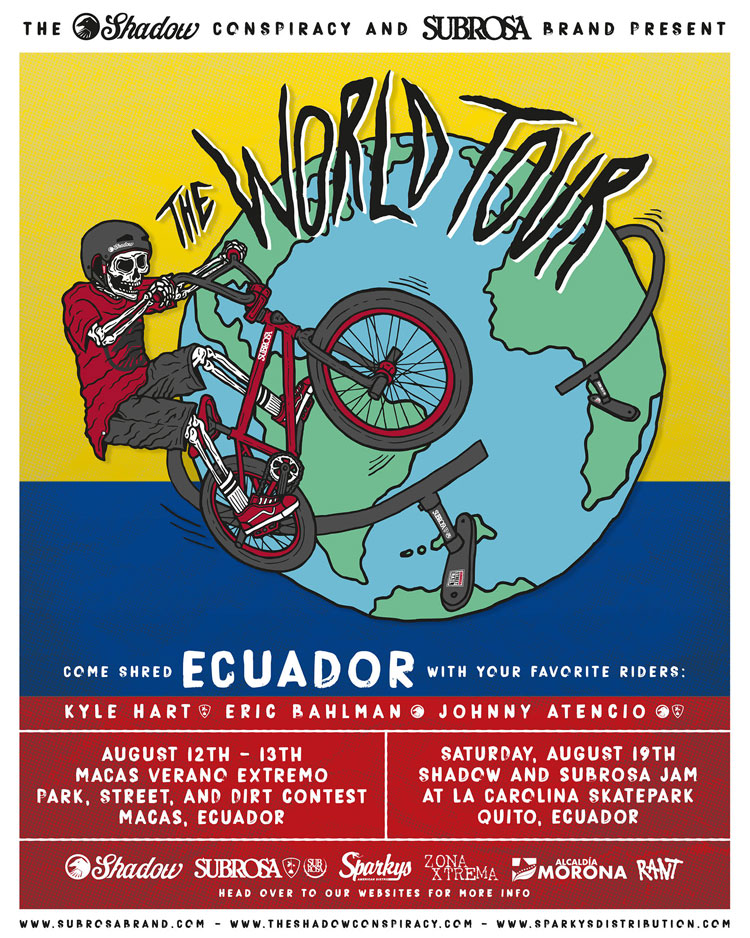 “The Shadow & Subrosa World Tour is heading to South America! Ecuador locals prepare yourselves to shred with team riders Kyle Hart, Johnny Atencio, and Eric Bahlman at the Macas Verano Extremo Contest August 12th to 13th and at the La Carolina Skatepark in Quito August 19th. A very special thanks goes out to Marco Calderon, Zona Extrema Distribution, and Alcaldia Morona for making this happen. We can’t wait to see you all there!”

The Shadow Conspiracy and Subrosa World Tour continues! This time the crew made their way to Colorado to visit Pusher BMX and a few other shops to have parking lot sessions and pizza parties! Check out what went down!

“The Shadow Conspiracy/ Subrosa World Tour has hit tons of states across the U.S. and has ventured many countries across Europe. On this leg the boys hit a bunch of shops and spots around the Denver area.

With the help of QBP this trip we gathered up Shadow/ Subrosa riders Lahsaan Kobza, Matt Ray, Kyle Hart, Jono Hopping, and Johnny Atencio and hit the road!

The guys met a bunch of awesome riders and fans, and visited 3 shops including Pusher BMX, Rideco Bike Shop, and The Fix Bike Shop.

We ran into some bad weather, at a few shops, so this video is from our session at Pusher!

Thanks to QBP, Pusher, Rideco, The Fix, and all the riders who came out and showed us some love!

The Shadow Conspiracy and Subrosa World Tour continues. This time around, the crew spends some time between Arizona and California cruising skateparks and visiting shops along the way! Hit play to check out a ton of highlights from the pro team and a few of the riders that showed up for the sessions in the video above!

“Head South as the Shadow and Subrosa World Tour soldiers on through the deserts of Glendale, Arizona and beaches of San Diego, California.

A huge thank you goes out to all the local shredders who showed up, as well as the shops that helped come together and put these events on: Wheels in Motion, Gordy’s Bicycles, Biker’s Edge, SD Wheel Works, Bario Bike Shop, and East County BMX. We love your support and hope to ride with you all again soon!