The Colony team were able to get most of their team out to the ACT Jam down in Australia this year. Here’s a highlight reel of footage featuring their crew getting down over the course of the weekend. Tons of wild riding to see in this one. Looks like it was another successful jam to us!

“Originally this ACT Jam trip video was suppose to be more a behind the scenes raw video but the guys got some solid footage so we pieced it together for what you see here.

Colony just dropped this new video Bike Check giving you a closer look at Polly’s current Prody setup that he’s running. This video is stacked full of clips from the Lilydale bowl where Polly put together some front brake magic and a bunch of other tricks for you to check out as well. Hit play and enjoy! Full parts list below…

END_OF_DOCUMENT_TOKEN_TO_BE_REPLACED

Focalpoint just dropped their latest round of The Package for your viewing pleasure. As expected, there’s a ton of heat in this one from the streets of Melbourne where these guys went to work on ever rail, ledge and spot they came across. Dialed riding, clean film work… Don’t pass this one up!

If you enjoyed the video make sure you hit the like button and subscribe for more videos. Thanks.

END_OF_DOCUMENT_TOKEN_TO_BE_REPLACED

Did you catch the Summer of Colony Road Trip Video that dropped back in January? Well, you should have because it kicked ass. Today, Colony have released some B-Roll from the trip which ended up being just over 6 minutes of real solid clips that just didn’t make the cut. Hit play to see what Alex Hiam, Chris Courtenay, Clint Millar, Josh Dove, Polly, Chris Bracamonte and Victor Salazar had for clips just waiting to be seen!

After that, go watch the actual video: Summer of Colony Road Trip

END_OF_DOCUMENT_TOKEN_TO_BE_REPLACED

Colony just sent through their latest BMX video from a trip they took hitting skateparks, street spots and Clint Millar’s backyard ramp all along the way! This video is stacked with amazing riding from a bunch of different styles from street guys to technical lip tricks, front brake magic and big bangers. Don’t pass this up!

After you watch the video, check out a bunch of dialed photos from the trip over on the FOCALPOINT website.

“We spent 9 days on the road around Brisbane then down the coast to Canberra hitting up a bunch of parks and anything else we could come up on. We hosted 10 jams in 9 days at local parks along the way and had a blast riding with everyone. Here’s the video from the trip and you can view a pretty large photo gallery over on the Focalpoint website.

END_OF_DOCUMENT_TOKEN_TO_BE_REPLACED

A little front brake magic every day will keep the doctor away! Colony just hit us with a link to a fresh BMX video from one of Australia’s finest front brake magicians, Polly, who cooks up some damn good riding on street spots and skateparks from Australia to the U.S! Get on that play button because you won’t be disappointed!

“The latest video from Polly which was partly filmed over in California and then finished up back in Australia. Also featuring Tom Stretton and Nathan Sykes.

END_OF_DOCUMENT_TOKEN_TO_BE_REPLACED

We’re always so psyched when a new Polly edit drops because we know we are in for some front brake magic! Check out this fresh one Colony dropped that’s loaded with just that! Don’t act like you’re too cool for that song, too!

Filmed and edited by Cooper Brownlee

END_OF_DOCUMENT_TOKEN_TO_BE_REPLACED 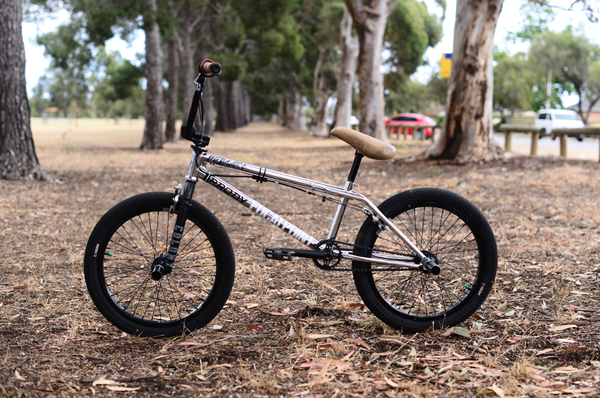 Colony caught up with the one and only, Polly, to take a closer look at his current Prody setup that’s decked out with both brakes, 4 pegs, 4-piece bars and a freecoaster. This machine is built to get technical. Get yourself a better look right here.