With the X-Games getting underway down in Austin, Texas today, the Vert finals went down and as expected, some wild riding did, too! Hit play to check out some of the riding that went down from Jamie Bestwick, Dennis McCoy, Mykel Larrin, Simon Tabron and more!

“Vert finals at X Games 2016 is a wrap. The top three spots were held down by Jamie Bestwick, Simon Tabron, and Dennis McCoy—all dudes over 40 years old. How wild is that? Also, both of Jamie’s run’s broke into the 90s,Dennis pulled a 900 in his first run, and Zack Warden took a hard crash trying a flair bikeflip on the third wall of his first run. Vert riders are the modern gladiators of BMX.” – Ride BMX
END_OF_DOCUMENT_TOKEN_TO_BE_REPLACED

Here’s one we’ve been anticipating for quite some time now! Vans have just released the trailer for their full-length video “Illustrated” that will be premiering at the X-Games here in June and being released worldwide shortly after. The video will feature Scotty Cranmer, Jason Watts, Kevin Peraza, Calvin Kosovich, Sean Sexton, Brian Kachinsky, Dakota Roche, Bruno Hoffmann, Ty Morrow, Dan Lacey, Gary Young, Pat Casey, Cory Nastazio, Tyler Fernengel, Dennis McCoy and Tim “Fuzzy” Hall. Based off what we know about each of these riders, it’s going to be an absolutely PHENOMENAL video. Get ready.

“Vans, the original action sports footwear and apparel brand, and the first name in BMX, announces the industry’s most anticipated video of 2016, ILLUSTRATED. ILLUSTRATED marks another astounding milestone for Vans, marking the brand’s first-ever, feature length global BMX video since the company’s inception in 1966. Directed by respected BMX photographer Justin Kosman, and featuring groundbreaking full parts from some of the biggest names in BMX, ILLUSTRATED gets up-close and personal with the multifaceted Vans pro BMX team as they circle the globe in search of never-before-ridden terrain.

ILLUSTRATED is about paving your own path; a unique ride through life, both on and off the bike. With style, precision and drama at every turn, each rider demonstrates their own chosen direction as they journey across the globe establishing their craft as creators of one truly original art form. In the end, we are graced with a showcase of cinematic adventures, written in scratches and skid marks on walls and rails around the world. This is their piece, their extension and their illustrated reality – this is ILLUSTRATED.

On June 2, Vans will present the world premiere of ILLUSTRATED at the iconic Austin venue, The Mohawk, during the 2016 X-Games. Chronicling another first in Vans’ history, the Austin red carpet premiere will be webcast live on RideBMX.com. Hosted by BMX personality Steve Crandall, the global webcast will feature live interviews with the Vans BMX team, exclusive unreleased bonus content, and the first official screening of the video in full form. The Austin event will cap off with live performances by heavy metal band Sword, alongside a DJ set by Vans skate legend John Cardiel. Following the premiere, ILLUSTRATED will make its international debut across the globe with stops in Europe, Asia, Australia, Canada and Mexico.

BMX riders adopted Vans in the late ‘60s because of their reliable construction and rugged waffle outsole. The “Off The Wall” philosophy of BMX led to Vans signing on the first officially sponsored BMX athletes in history, Bob Haro and Greg Hill. Decades later, Vans’ checkerboard flag continues to be a global mainstay in BMX and the first in the sport and as the leader in BMX footwear and apparel.”

END_OF_DOCUMENT_TOKEN_TO_BE_REPLACED

The latest episode of Matthias Dandois‘ “Can You Make It” series brings on BMX legend Dennis McCoy to give you some advice on how to get the Boomerang done. Dennis has been doing this trick since the 80’s, so it’s safe to say he’s got it dialed in. Hit play for plenty of advice and examples, then go out and get it done!

“In this week episode of Can you make it! We have the honor to receive a real BMX legend: Dennis McCoy! He teaches you how to do one of the coolest BMX Flatland trick: the boomerang.
Watch, learn, and go out there to try!!”
END_OF_DOCUMENT_TOKEN_TO_BE_REPLACED 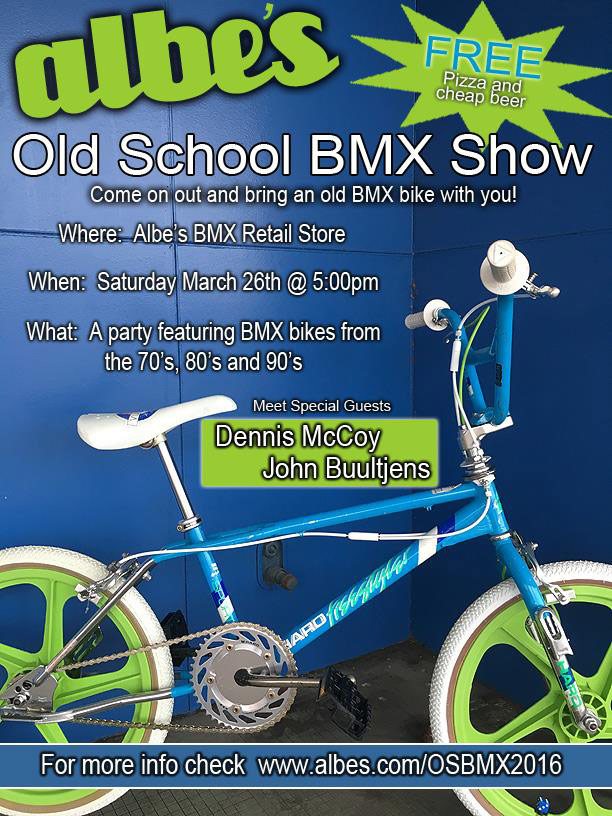 Are you looking for a good time? Well, the guys at Albe’s have one for you! On March 26th they will be having and Old School BMX Show at their shop in Warren, Michigan (close to Detroit). They will have free pizza, cheap beer, a TON of old school BMX bikes on display and Haro brand manager John Buultjens and the legend Dennis McCoy there as well! You can learn more about the event and check out a few photos from last years event on the Albe’s Website!

END_OF_DOCUMENT_TOKEN_TO_BE_REPLACED

Fiat recently invited the Vans BMX team to their headquarters in Michigan for a day of cruising INSIDE their corporate head quarters. We’re not sure just why this happened, but we have a feeling there is some sort of collaboration in the works… Either way! You get to watch the guys have some fun and watch the employees wonder what the hell is going on!

“Vans Pro BMX Riders Brian Kachinsky, Dennis McCoy, Dakota Roche and Tyler Fernengel took over FCA Headquarters in Auburn Hills, MI. Watch them shock employees as they ride their bikes trying to not cause too much trouble during their visit.”

END_OF_DOCUMENT_TOKEN_TO_BE_REPLACED

Ohhhh… My… God… This is SO much worse that we imagined when the first video dropped the other day. Here’s part two that actually shows the crash that Mat Hoffman and Dennis McCoy had that ultimately left Dennis needing to get surgery to fix a HUGE gash in his leg. This video is SUPER graphic and gives you a look at the gash and the doctor doing surgery to fix it. If you can’t handle blood or gross stuff… Don’t watch this!

“This is footage I hoped to never show. It seemed impossible that anything good could have ever come out of this experience, but never doubt DMC. Dennis could have died less then a year ago while severing the tendons that hold his leg mussels to his hip and still made a full recovery. Now, after such an injury, he will be competing vert next week at the X Games in Austin at the age of 48. Super human and inspiring. So here is a story that was one of the lowest moments in my life and now, through heart, determination and dedication, flipped the coin and is now one of inspiration and motivation.” – Mat Hoffman

This one is kind of all over the place with Mat Hoffman and Dennis McCoy riding Mat’s vert ramp, then they get into X-Games and some sky diving, but it all comes back together at the end giving us a little look into a very scary situation for two riders to be in, especially coming in hot from an air out of a vert ramp. Take a peek!

Hell yeah! Now this is what we’re talking about! Haro‘s man in charge, John Buultjens, celebrated his 43rd birthday with a proper session at Area 43 with a few friends! Check out some front brake magic from John along with some additional clips from Dave White, Mike Parenti and Dennis McCoy! Old man John just crushing it!